One year on from the toppling of the Colston statue in Bristol, Phil Castang reflects on how ditching the Colston name for the concert hall - now the Bristol Beacon - has helped the city move on. 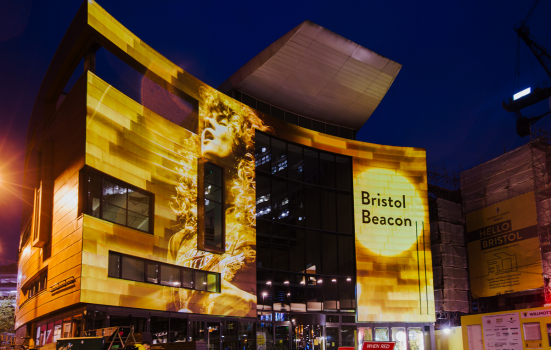 In April 2017, Bristol Music Trust announced that when its concert hall reopened after a capital rebuilding programme, it would be with a new name and identity. Although many welcomed the decision, it was deeply controversial. Social media was filled with posts from people threatening to boycott the hall and many colleagues received hateful letters.

Bristol has a reputation for being a segregated city and its unreconciled links to the transatlantic slave trade are central to this. It had become increasingly clear to the Trust that a showpiece concert venue bearing the name of a slave trader was contributing to the city’s segregation problem.

Although our programme championed diversity and inclusion, some artists and audiences felt unable to enter the building. A new name and brand were inevitable, and we were unanimous in our decision to change it.

We knew the moment had come

We had planned to announce our new name in April 2020 but that was postponed by the pandemic. When Edward Colston’s statue was pulled from its plinth and unceremoniously dumped in the harbour on 7 June last year, we knew the moment had come. The following day we released a statement setting out the timetable for announcing the new name and removed all traces of Colston from our building and website over the following weeks.

In some respects, the spring momentum of the Black Lives Matter movement and the statue toppling were not a surprise. Bristol Music Trust had been immersed in discussions around the ongoing impact of colonialism for so long, we knew the arguments and understood the strength of feeling emanating from the black community. We were on our own path of change and knew others would follow.

Soon statues and monuments began to fall around the world. Colleagues across the arts sector were stating their anti-racist positions and launching EDI plans. Locally, schools, businesses and churches were announcing their intentions to drop the Colston name and all other associations. Suddenly, we were just one of many interconnected cogs turning for change and no longer feeling out on our own.

It’s been a year since the statue’s toppling and eight months since we announced our new name as Bristol Beacon. The social media nastiness has faded and there is a renewed sense of vision and purpose that comes with starting afresh. It feels a like a weight has been lifted.

Consultation has been critical throughout our journey to becoming Bristol Beacon. Engaging widely has helped shape a vision for the kind of organisation we want to become, and the city needs us to be. Profound conversations with communities, funders, partners and staff have diversified our outlook and brought a plurality of voices that we don’t yet have inside the organisation.

We have also been developing ‘Inclusive Excellence’ in our creative programme.  Inclusive Excellence is rooted in the belief that you can’t have excellence without inclusion and that the very success of a modern, thriving venue depends upon the quality of the relationship with local communities. At the heart of this relationship is trust. There comes a point when promises must be delivered and words must become actions. Change must be tangible.

On the announcement of our new name, we launched ‘Our Transformation Promise’. This commits Bristol Beacon to a major programme of organisational culture change, and it is on these promises that we will be judged.

Will the promises be met?

Ultimately, music is what we do, so our artistic and creative learning programme must be as diverse as the city we’re proud to call home. As Bristol’s largest concert venue and home to the city’s music education hub, it is incumbent on us to ensure the artists on our stages, in our workshops, and working in our communities are representative of the city and the UK, and that our cultural offer is broad and expansive.

We work in partnership with arts organisations, agencies, producers, and promoters such as Paraorchestra and Friends, who bring additional experience and knowledge of working with under-represented artists and genres. Each year, through the support of PRSF and Youth Music, we invest in the development of emerging creatives who are under-represented in the music industry, providing a year-long programme of tailored support.

Bristol Beacon needs to represent and reflect the identities and experiences of all people.  To improve our workforce representation, we are working with several organisations including ‘Representation Matters’, to ensure our recruitment practices are delivering the pace of change we need to see.

Over the next five years, Bristol Beacon will launch several new strands of work that aim to improve lives and health outcomes of communities across the city. This means a new programme of participatory arts activities for those experiencing social isolation, commissions that connect and build trust with communities that have felt historically detached from our venue, and we have a new role as part of ‘Thriving Communities’, supporting music on prescription.

We are very proud of our new name. A beacon is a powerful symbol of hope and community. It is a focal point, a gathering space, illuminating the way ahead. A place of welcome, warmth and light. It is an open invitation for everyone to come and share in the joy of live music.