Circus was created to fill a gap left by ‘serious’ theatre. Now a new generation of performers is rejecting bureaucratisation to rediscover the artform's anarchic roots, writes John Ellingsworth. 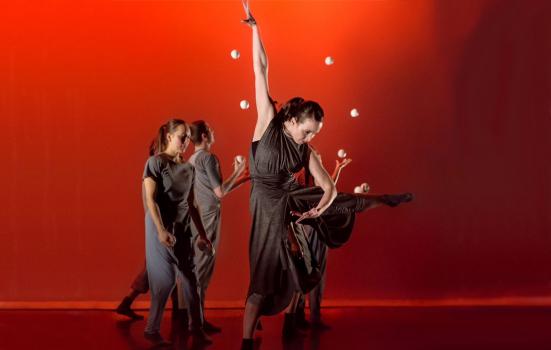 A performance of Gandini Juggling and Alexander Whitley's ‘Spring’
Photo:

Last year marked a significant anniversary for circus: 250 years since the foundation of Astley’s Circus. With events up and down the country, the year-long Circus250 was a moment to celebrate circus as an artform, but also to reflect on its long history of reinventions, falls and rises, near-disappearances and shock returns.

Astley’s Circus came about because the founders saw a gap in the market left by a concerted movement towards ‘serious’ theatre. It brought together physical skills that had existed on the fringes and occasionally in the mainstream for centuries. Much later, in the 1960s, ‘new circus’ sprang from a background of social upheaval and protest as part of a radical desire to break from performance traditions, democratise culture and remove the barriers between high and low art. In this sense, circus has always understood how to seize a good opportunity – and how to turn itself to the challenges of the moment.

And while lately the circus sector has been on something of a hot streak, it does still face challenges. Not least of these is a straitened funding environment that has narrowed the opportunities for making work, particularly for emerging companies.

As the artistic director of Jacksons Lane, a venue with a strong circus programme, Adrian Berry feels there’s been a contraction: “While in the UK it seems that circus is growing, on the ground we’re seeing something different... There used to be a steady stream of new companies coming to us out of the National Centre of Circus Arts. Now that’s reduced to almost zero.”

He identifies a lack of producers and consistent funding as factors in this decline. Bim Mason, education and artistic director of the Bristol-based school Circomedia, also points to changes in the funding environment, adding that the rapid rise in student mental health issues combined with increased safeguarding regulations has made it difficult to foster an environment in which students take physical and artistic risks.

To external pressures of this kind can be added a number of internal problems and contradictions. One of them concerns the success of the field itself. As the circus sector has become more saturated and competitive, with ever more artists graduating from schools and a number of institutional and support bodies being founded, there is a distrust in the structure of the system and a feeling that circus is becoming too administrative – too much like dance.

For an older generation, part of what’s at stake is the spirit of anarchy and outsideness. Sean Gandini of Gandini Juggling acknowledges the support festivals have given to his own company, but describes conferences where artists are squeezed out in favour of those talking about production and administration: “It's like going to a food conference where people only want to talk about the architecture of restaurants. I have an idea that you can make circus in your kitchen, that it’s an anarchic form that suffers from over-producing and bureaucratisation.”

Many younger artists have something of the same sentiment, feeling that their future lies in the hands of a relatively small set of decision-makers. Overall, there is a desire to side-step the normal chain of production and find different ways of working – and this has begun to manifest itself in some new trends of work.

One of these explores working with communities. Circus has long had a strong and developed strand of social practice – using circus skills in education and participatory settings – but this has often been seen as separate to artistic work. Vicki Amedume of Upswing feels that companies are waking up to the fact that engaging audiences through participation can be “a useful strategy to create compelling art as much as a means of social intervention”.

In one strand of work, her own company has worked extensively with older performers and participants, undertaking a ten-week residency in Bethnal Green’s Silk Court care home, and in another project creating the intergenerational performance ‘What Happens in the Winter’.

A greater emphasis on place and locality is also on the agenda. The circus field is remarkably international – in the make-up of companies, the tours of performances and the movement of individuals – but Glasgow-based artist Ellie Dubois talks about an international style of show that sands off its corners in the name of fitting everywhere: “Going to see one of those shows is a bit like booking to stay in one of those international hotel chains. You get exactly what you are expecting and it is mostly of the quality you want. But it’s not distinctive. I think that one of the things that UK circus can do is to create work that is grounded in place and communities.”

Next year Ellie will work on a touring circus show that reflects the lives of women living in Scottish communities. “Because it is so specific, I suspect that it will also be recognisable to communities elsewhere – in rural Spain or Italy.”

Return of the big top

This desire to be both international and specific speaks to a final trend for the field: the return of the big top. For the traditional circus it never went away, and Wales’ NoFit State has long toured in its silver spaceship. Now younger companies, including Lost in Translation Circus in Norfolk, are looking to the tent as a way to reach new audiences and to exert more control over how they make work and where they take it.

If this is the future of circus (or one of them), then it echoes ambitions of the past, including those of the pioneers of the new circus movement, who looked to the tent as a democratic and universal space that could reach areas not normally on the cultural map. It’s an aspiration worth holding on to, and perhaps a way for circus to create its own path going forward.

John Ellingsworth is a writer for Crying out Loud.
https://cryingoutloud.org