Jessica Bowles took students from The Royal Central School of Speech and Drama to curate the Prague Quadrennial's SpaceLab - and found their theatrical assumptions happily challenged. 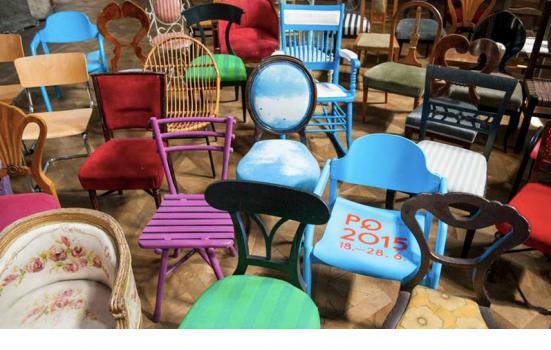 Seats waiting for the audience at Colloredo-Mansfeld Palace
Photo:

Working in partnership with professional theatres is what inspires my work as an academic. For over 20 years I have brought together professional companies and students to work on projects that enable both sides to take risks and learn new things. The Prague Quadrennial of Performance Design and Space is the largest international festival of theatre and performance design in the world, an event vital to any theatremaker’s development. In one city, at one time, you get a real sense of the zeitgeist of performance-making across the globe. It’s been part of my life as a theatre designer, and to attend is to be surrounded by artists, academics and thinkers who come to share, explore, taste, provoke and immerse themselves in the current thinking and practice in performance design and architecture.

In 2012 Sodja Lotker, artistic director of the Prague Quadrennial (PQ), invited The Royal Central School of Speech and Drama (Central) to join ten other arts organisations to create a research project that would frame the festival, and also to curate the educational component of the festival SpaceLab. The capacity for space to be a politically charged entity was of interest to us as theatremakers and Lotker’s title for this project ‘Shared Space - Music Weather Politics’ is a provocation to think differently about the potency of design for performance.

Supported by the European Union’s Culture Programme, the project got underway in 2013 and brought us into alignment with a formidable group of collaborators from across Europe and beyond. These included museums, theatres, theatre festivals and leading university theatre faculties in the Netherlands, Norway, the Czech Republic and Israel. For the last two years we have created a rich programme of gatherings of artists and academics, symposia and events with PQ2015 at its centre, and with more conversations and evaluations to conclude in 2016.

Students came on this journey with us, joining the curating team to shape both the research investigation and the festival programme. Our meetings took place in deliberately disruptive places: a student project took place in Norway in a lighthouse during a winter gale in December 2013; a conference was held on a bus travelling through the rainy, city streets of London in May 2014; and a symposium in Utrecht took place under a motorway intersection in September 2014. In this way, our work sites changed our mindsets.

For SpaceLab we developed these connections to forge an international student team from Central and the Theatre Faculty Utrecht and Dramatic Academy (DAMU). The students were tasked with curating and producing two festivals during 2014 (one in Prague and one in London). We then built on this experience to scale up the team with students from DePaul in the US and York in Canada.

PQ2015 itself was huge with over 180,000 participants and 7,000 delegates, but it was much more than the scale of the festival that made it unique. Where previous editions of PQ had existed in huge gallery and exhibition spaces on the edge of Prague, this year we took over the city’s fabric, from tiny galleries to palatial buildings. The SpaceLab team worked very closely with a Czech PQ production team to deliver 11 days of workshops by international artists on subjects as diverse as performing skins made from loofahs, augmented digital realities, falling objects, trash and a weather banquet, with performances by students from over 40 countries.

The challenges of international collaboration are numerous. There’s all the usual stuff around making a budget for something which hasn’t yet been created, with people you don’t know for a venue you’ve never worked in. And then there are the EU regulations around chapters and spending protocol, but none of this is as time-consuming as aligning three different university curricula with a professional theatre timeframe. It’s not that one moves faster or plans further ahead than the other, but rather that we each have different ‘bio-rhythms’, internal deadlines and expectations. Collaboration takes time and has a financial value, but EU budget rules don’t allow for more than a small fraction of the project costs, so most of us ended up gifting our weekends to make this happen.

The benefits for the staff and students have already been enormous. In curating this programme of workshops we have all had the comfortable assumptions we held about our own countries’ claims to theatrical excellence challenged, and we have discovered new work in many languages. We know more about our tastes as individuals and understand that all curating has political and social responsibilities and consequences. So we may have started with a map and an EU project, but the real joy is found in the relationships we have made as theatremakers. As we started the festival, a razor wire fence was starting to be erected across Hungary’s border, and as I write more countries prove impermeable to refugees, the borders becoming a performance act of sovereignty and exclusion of the ‘other’. Seeking out our shared spaces has never seemed more vital to me.

Jessica Bowles is Course Leader of the MA Creative Producing at The Royal Central School of Speech and Drama.

You can watch a video here.