A reliable and robust business model

When Marc Steene set up a new art charity, he knew that the key to success would be adopting a business model based on a mix of revenue streams, including an endowment fund and earned income. 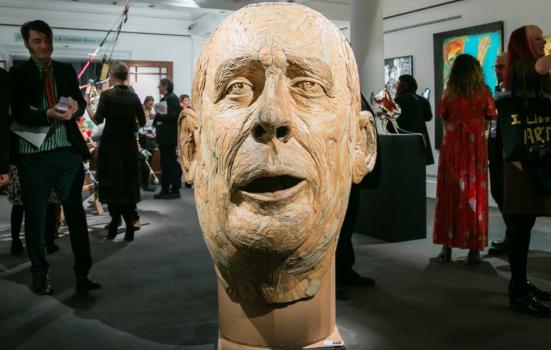 The opening night of Outside In: Journeys at Sothebys
Photo:

Over 11 years ago, I established Outside In as a project run out of Pallant House Gallery in Chichester, Sussex, as part of its community programme. Our primary purpose is to provide a platform for artists facing barriers to the art world, such as disability, health or social circumstance. We offer a range of online and physical exhibition platforms, as well as professional development opportunities, and over the years have held over 50 exhibitions and currently support 2,600 artists.

For the majority of our time at Pallant House Gallery, Outside In was funded by grants from trusts and foundations, primarily the Paul Hamlyn Foundation and Esmée Fairbairn Foundation. We also generated some income from art sales and private donations.

In 2017 Pallant House Gallery decided to make Outside In a standalone charity to realise our potential as a national organisation and develop further income streams and our staffing capacity.

Having spent 17 years at Pallant House Gallery (the last three as its Executive Director), I had helped to develop its business model and had been closely involved in various fundraising initiatives. The gallery was fortunate to have developed an endowment fund over many years that provided nearly a third of its total income. The Friends’ scheme also provided another important revenue source alongside commercial activities, such as the shop and restaurant and ticketed income. Public funding provided only 9% of the gallery’s total income.

In establishing Outside In as an independent charity, I was keen to replicate the gallery’s business model for the new organisation. Given the increasing cuts in public funding and the pressure on grants from trusts and foundations, I wanted to establish a base of earned income to present a viable business plan.

Setting up an endowment fund was a priority and I was fortunate to gain the support of two private benefactors to establish this. Having the commitment to fund the endowment was pivotal in obtaining two bridging grants and presenting a strong application to Arts Council England to become a national portfolio organisation (NPO).

We secured NPO status and that has provided a powerful validation for the newly formed charity. NPO funding is unrestricted and in place for four years, thus creating a strong foundation on which to build. The aspiration is to grow the endowment fund to the level where it covers the majority of the core costs for the charity.

We have also developed other earned income streams similar to the gallery, including a supporters’ scheme and commercial income from art sales.

We launched the charity at Sotheby’s in January with an exhibition ‘Outside In: Journeys’. The exhibition was widely covered in the press and generated a great deal of interest. In addition, Sotheby’s provided the use of its board rooms and three lunches were organised for influential philanthropists and potential patrons.

The exhibition and lunches were the perfect opportunity to launch our new patrons and friends’ scheme. Being at Sotheby’s we were able to draw in a new network of supporters and now have 12 patrons and 14 friends. We will be working to increase numbers year on year.

Outside In has always sold artists’ work at exhibitions and online, charging a commission of 30% on these sales. Art sales provide not only a source of income to our artists, but the fact that someone likes their work enough to buy it is a powerful message to someone with low self-esteem.

We have taken part in the Outsider Art Fair in Paris over four years, where our artists’ works have been acquired by major collectors and dealers. While operating as a project, Outside In would often generate over £15k a year from art sales. With new staff and a new website designed to maximise sales soon to be developed, we have set higher income targets for sales from exhibitions and online.

Developing a new charity poses many challenges, but having a robust business model in place should lead to a sustainable future. A mix of income streams can provide the means to develop long-term plans. Earned income that is not assigned to project funding enables us to recruit staff and invest in developing long-term programmes and activities.

With ongoing earned income, we are also able to make grant applications that are more likely to succeed as increasingly funders are looking to support sustainable organisations. Having a strong and well-networked board is vital in securing new supporters and patrons. And having a clear mission and vision that is easily articulated and shared by all stakeholders is a powerful incentive as well.

We are fortunate in having evolved from Pallant House Gallery and to have been able to learn from and adapt the model developed there. I hope that the lessons learnt will help other similar organisations in this difficult economic climate.

Marc Steene is Director of Outside In.
www.outsidein.org.uk

A reliable and robust business model