A new diversity programme will shift power and resources to where they can be most effective. Dawn Walton explains the thinking behind Eclipse Theatre’s new artist development initiative. 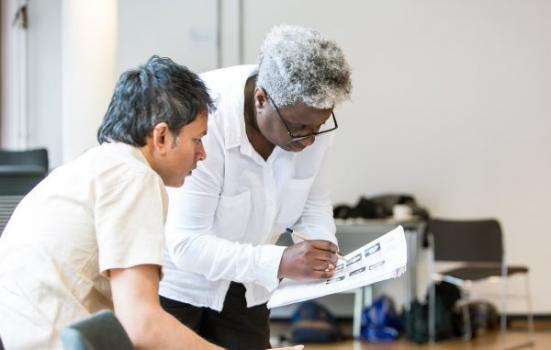 Back in December 2014, Eclipse was one of five organisations invited to join Sir Peter Bazalgette on a panel when he delivered what he called “one of the most important speeches I will make as Chair of the Arts Council”. He introduced the Creative Case as a “fundamental shift” in the Arts Council’s approach to diversity. That day, he also talked about “a new generation of cultural leaders knowing that diversity was about who had power and how they deployed the available resources”.

This stuck in my mind, as leadership, power and resources traditionally have been placed in the institutions themselves. I think it is fair to say that, historically, there has been a persistent and pervasive lack of inclusivity in theatre, which has particularly affected Black artists. It forces some theatre makers to operate almost entirely outside of mainstream theatres, removed from both resources and power.

Leaving behind the institutional ‘top-down’ approach, we have devised a programme in consultation with more than 40 Black emerging and established artists

Remarkably, despite numerous obstacles, exceptionally talented Black theatre makers continue to make work on the periphery. A lack of resources – whether that’s funding, technical support or physical space – prevents these artists from developing their work or reaching wider audiences. Even if a theatre commissions a Black writer, the expectations are enormous; the work will not be allowed to fail. If it does, that failure will apply to all Black artists in that region for a few years.

Sadly, this often means that Black artists with huge potential simply give up or leave the region. Meanwhile, theatres continue to use their resources in ways they are familiar with when attempting to achieve diversity, for example by programming the same kinds of works but adopting colour-blind casting, which – athough welcome – is a short-term fix. Diversity drops out of the narrative at some point and the cycle continues.

However, funding from Arts Council England’s Sustained Theatre Fund has allowed Eclipse to design a programme that starts with Black artists in our region: the North. Eclipse will lead the initiative, working in partnership with an initial consortium of ten organisations, including HOME in Manchester, Forced Entertainment and York Theatre Royal. We will support and develop Black theatre by working with more than 1,200 Black artists over the next three years, increasing access to local, national and international networks and creating new opportunities for Black artists.

Leaving behind the institutional ‘top-down’ approach, we have devised a programme in consultation with more than 40 Black emerging and established artists making work across the region. This furnished us with knowledge and an understanding of the real obstacles they face, as well as a ‘shopping list’ of needs, such as commissions, play pots, retreats, workshops and R+D materials. This in turn means that the partners can very quickly identify how they can effectively create a bespoke development programme tailored to the needs of individual artists.

These Enablers are Black arts professionals, who between them will seek out Black artists in the region, recruiting their participation in the programme, delivering ongoing consultation with artists to assess their needs and identifying bespoke services the programme can offer. They will liaise with the consortium on development, monitoring and ongoing evaluation of the programme, spotting success and identifying where we may be able to improve our offer.

Artists have been involved at every level of decision-making, from the appointment of the Enablers to being a member of a commissioning panel. This is a fluid, non-hierarchical structure that will enrich those institutions working as part of the consortium as much as it develops the artists.

This approach also questions the ‘one vision artist director’ model. Having sat in script meetings for 20 years, I have witnessed ‘taste’ obstruct Black theatre. As a touring company, Eclipse has received extraordinarily negative feedback on new scripts before the production goes on to sell-out in other venues. Being asked for a script for a piece of ‘made’ experimental work is a daily hurdle for many Black artists in the independent sector. I’m not saying the role of the artistic director is obsolete, but that whoever is in that position of power needs to surround themselves and be influenced by a wider programming team, one I hope will include a more diverse range of voices in future.

Our programme will have an incredible ‘hive mind’, which will grow with additional consortium members including international ones, as time goes on. In addition, the Enablers have a ‘Council of Knowledge’ – a group of individuals from independent artists to artistic directors and chief executives of major arts organisations – who have committed to bringing their expertise and networks to support the programme.

This is a chance to develop sustainable models for Black artists by increasing access to local, national and international networks and opportunities. It is a chance for some of that power and those resources to shift to where they could be most effective for diversity.

It is February 2017 and many of us have been locked in rooms, writing and counting characters for our National Portfolio funding applications. Around 10% of those characters must demonstrate how each of us will “contribute to the Creative Case for Diversity”. I hope everybody means it.