The invitation to bring a disused library in Southwark back to life as a pop-up space for artists and community groups came with many challenges as well as opportunities, Rebecca Manson Jones reveals. 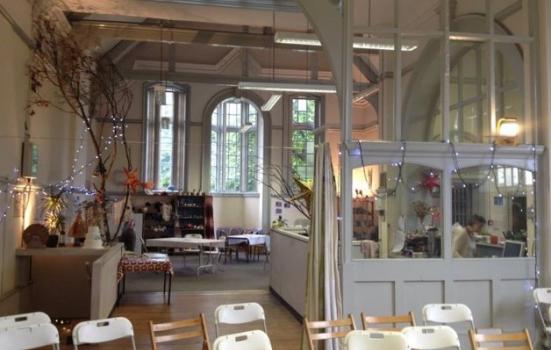 In the summer of 2014 I was invited by Southwark Council’s Arts Service to pilot an arts development space in the former Passmore Edwards Library in Burgess Park in south London.

The disused library is a beautiful listed building with high ceilings, wonderful light, a boarded timber floor and period features. Its acoustic suits contemporary operas and chamber musical rehearsals and its height delights dancers. The open plan lends itself to immersive and cabaret-style performances, workshops, gigs, markets and community meetings.

We were offered the building on a peppercorn rent in return for curating access for other creative groups and individuals. Our first event was a ‘Fun Palace’. It was the perfect fit – a disused library where the books may have disappeared but the inspiration remains.

Southwark was responsive to our artist-led proposal offering escape from solitary working in unsuitable conditions. After 15 years based in funded arts organisations, working out of my home office had become ‘anti-creative’. I missed the collective confidence and fun that working in a community brings.

We offered desk space, access to an affordable creative space, plus dirty workshop. The initial 12-week pilot was extended three times to this March. Each time the team was refreshed, reflecting the needs of freelancers and independents to take on work as it comes.

Programming with the community

As artists, we were not interested in a narrow programming policy. We aimed to stay open. If the proposer understood how to make an idea happen, we offered the lightest touch financial deal we could in return for them doing all the work. We received two small grants to work with the local community and we hosted 60 students from London Southbank University. Following our second Fun Palace, we had a rush of community-led events.

As a registered charity, my company Just Jones & offered the umbrella infrastructure. We took on the responsibility of negotiating extensions with the council and liaison with local stakeholders. Our biggest challenge was keeping our contribution to the pop-up proportionate to the value (experiential, reputational and financial) we received from working within the community.

The model of tenancy ‘at will’ was sustainable as long as we could pay a basic rent. However, the recent cuts have forced Southwark Council to offer an extension only until this September.

Had this proposal been for a longer period, we might have been successful in applying for core funds and recruiting new partners. Arts Council England’s Grants for the Arts or other applications for such a short lead time would mean putting our limited fundraising capacity into the building’s operation, or working on a commercial hires model rather than focusing on our artistic practice. We decided that another group would be better placed to take on the project.

The council has now offered the building for tender to arts users with the expectation of a two-year tenure from June while its long-term future is decided. We’re pleased that the building will remain accessible to artists and the community, and have shown in our varied approach the scope of what is possible.

This unexpected experience has given us a foothold in the community, a new network of artists and confidence in dealing as a small organisation with a huge institution. The biggest threat to relationships of this kind is the climate of uncertainty in terms of funding, job security and short termism.

We succeeded in keeping the spirit of the collaboration alive because the councillors and officers I was dealing with wanted the same thing as us: a thriving, happy and inspiring building. As long as those aims underpinned our discussions, we could navigate the difficult stuff such as the intractability of council processes, burdensome reporting procedures and long waits for updates.

Working with the arts service to advocate for us was hugely effective in approaching other departments and we will definitely draw on this experience to take on a space for a longer term in the future.

We applaud Southwark Council for investing in committed and knowledgeable arts and parks teams. We hope that pop-up spaces can grow into sustainable and valued permanent artistic bases within communities. They constantly prove their worth in placemaking as well as supporting the ever-growing communities of professional and citizen artists.