Realising that its audience members were all in ‘a stage of transition’ was a revolutionary moment for Jabberwocky Market. Caroline Pearce explains why. 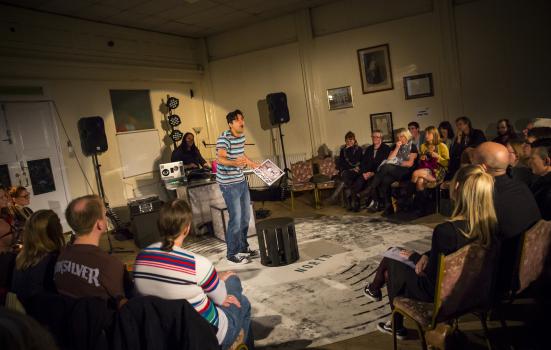 As a producer I have worked across the country for big and small arts companies, local authorities and festivals. I’ve always been inspired by things that are new, different and collaborative. In 2012 when David Jubb tweeted a call out for potential partners in far-flung towns to work with Battersea Arts Centre (BAC) on the Collaborative Touring Network project and invent the future of touring, it was completely up my street.

My home town of Darlington was up in arms about the imminent closure of the much loved Darlington Arts Centre. At the time I was working there on a site-responsive, community and professional devised dance theatre piece to celebrate the stories and memories held inside the building, still with the hope that we could affect its fate.

Our audience includes some quite wealthy people and many very deprived people, old and young, male and female, arts sophisticates and new attenders

Over the next few months, we had phone meetings and residencies, held workshops with producers (both established and emerging), and drafted version after version of proposal and plan. On the second time of submitting, we were successful in securing the major funding for the network that now comprises BAC and partners in Hull, Gloucester, Great Yarmouth, Torbay, Thanet and Darlington. And so we started planning the first six of 36 festivals in our respective towns.

The name we chose for the Darlington project was Jabberwocky Market, which came from a fairly rigorous process and a couple of moments of inspiration. People remember the name and it’s a conversation starter. We talk to more new people about theatre than we would if the name was more obvious and it’s a brand that is building.

I still can’t recite the poem, but it was never about a literal reference – it’s a literary reference. Darlington’s a market town and a market is a place that people come together for transactions of one sort or another. At a Jabberwocky Market they come to exchange stories.

An audience in flux

In summer last year, three years after starting this process, at a development workshop in Battersea, we finally found the words to articulate what we knew about our audiences. Conventional models of engagement just don’t match the people who come to Jabberwocky Market events. Ostensibly, our attenders seem to have little in common and one great thing we do is build bridges between different types of people. At our events people encounter other local people in ways that are unique in our town.

Our audience includes some quite wealthy people and many very deprived people, old and young, male and female, arts sophisticates and new attenders. But they do have things in common. Sometimes these are shared experiences, but very often that commonality is their attitude and response to the different things happening in their lives.

The statistics we were gathering didn’t match the feeling we got at a Jabberwocky Market event, so we began to wonder if we were asking the right question. Then we realised that what they have in common is that their lives are in flux in some way; something significant in their world has changed and brought them to a place where they’re looking for something new: new stories, new friends, new hobbies, new jobs even.

Articulating that the bulk of our audiences are people at a stage of transition immediately helped us understand and communicate the Jabberwocky Market experience. It’s been really helpful in developing our communication strategies and prioritising audience development activity, as well as talking to funders and partners.

We didn’t think teenagers were a core audience group at all and steered our programming away from them as they seemed like someone else’s challenge. And then I heard Martin Wilson from the North East Cyber Crime Unit talk about the police’s work nationally in addressing social isolation in young people. When that is combined with intellect, curiosity, creativity and ambition it can lead to 15 year olds committing internationally significant cyber crimes from their bedrooms, unbeknown to anyone in their real-life social circle.

They are also at a stage of transition beyond what many of us really understand. We identified our teenage audience and started working immediately with the police to develop theatre projects to tackle and prevent social isolation and use tried-and-tested storytelling processes to engage young people with the real-life implications of their online behaviour.

This is just the start. We’re already building more projects and partnerships and developing our practice around this activity focus. By focusing both programming and project development around people at a stage of transition we can genuinely engage with the people in Darlington who are most ready and open to new stories and ways to understand the world. The stories that we believe theatre can communicate more effectively than anything else.

As funding cuts mean the infrastructure continues to change faster than ever before, we have a model of theatre events for sharing world-class storytelling with those who need it most.