Last month, weekly arts group participants with sensory impairments, physical disabilities and mental illnesses came together to perform an adapted Shakespeare play in Belfast. Eileen Branagh explains the process of creative collaboration that allowed the cast to realise their ambitions. 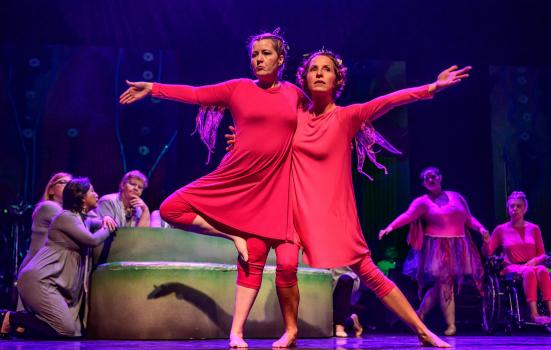 An Open Arts performance of A Midsummer Night's Dream

Every week, Open Arts runs classes across various artforms from drama, dance, choir and visual arts to creative writing and traditional Javanese Gamelan percussion. Our group participants have a range of disabilities, from sensory impairments and physical disabilities to mental illnesses.

In the past, the groups worked separately, so participants and artists from different groups didn’t necessarily know each other. Indeed, some participants did not know that our other groups even existed. This changed five years ago, when we brought our core groups together for a shared performance, which was devised and very experimental. The feedback from the participants was that they enjoyed the idea of being part of something bigger and more holistic.

As we continued to bring groups together, our ambitions grew. In late 2016, we produced an adaptation of a one-act opera by Ravel. It was during the second run in early 2017 that the idea of doing a Shakespeare production first materialised. The cast were adamant they wanted to do something funny, and I dared to suggest Shakespeare. Since the idea went down much better than I expected, I started to think that it might be possible.

A key element of our approach is that the strengths and interests of our participants are at the centre of every decision we make. When I talked to some of our artists about which Shakespeare plays would connect with our participants, A Midsummer Night’s Dream was the obvious choice. Its comic and magical themes were perfect for us, and we could already picture individuals in certain roles.

In conventional theatre productions there is a hierarchical approach where the director is in charge, but we do things differently. Artform leaders and facilitators work collaboratively with the participants, sharing responsibility and credit for the final product.

We knew from the start that we wouldn’t produce a full original text version of the play. We needed our version to be accessible so that participants could demonstrate their artistic skills and would enjoy the experience. Through a series of creative meetings with the core artform leaders and facilitators, creative and experimental decisions were made. For example, scenes with the lovers would be danced while the dialogue was pre-recorded and accompanied by live Gamelan.

The actors performing as the mechanicals explored the script and decided which lines they would keep to tell the story – and also what they felt comfortable learning.

Our production opened with a scene involving Puck and a fairy, written by the actor playing Puck. It replaced the opening scenes of the original so that our production brought the audience straight into the heart of the magical forest and fairy world.

We believe that with the right support (such as learning lines aurally and having sighted guides creatively built into the performance to bring actors on and off stage), the impossible is possible. So someone with cerebral palsy who uses crutches can dance. A trained actor who hasn’t been on stage since she became registered blind can act again. And someone with an acquired brain injury can recite complex Shakespearean verse and command an audience.

As one audience member and reviewer commented, we were successful at “adapting the script and action to take advantage of mobility aids and build them into the production rather than just try and work around them”.

We have just completed two performances at the MAC in Belfast, and have received positive feedback from participants, audience, funders and the media. I have been asked numerous times already if we can do it again, with one participant saying: “We have something excellent which we can build on and make even better. Most of the hard work has been done so it can be very enjoyable for all of us if we do it again, now that we know it's good and it works.”

We would love to tour this production to other parts of Northern Ireland. For the longer term, now that we have conquered opera and Shakespeare, we will talk to our participants about their ideas, inspiration and dreams, to see where they will take us on the next part of our journey.