Brewery Arts Centre increased its charitable income from box office donations by more than 40% when it approached customers at the point of sale. Libby Penn explains how this was achieved. 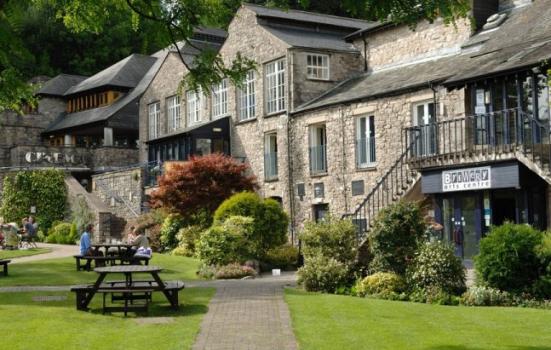 Sandwiched between the Lake District and the Yorkshire Dales, Kendal’s Brewery Arts Centre opened its doors in 1972, when the premises were converted from the historic Vaux Brewery. Since, it has hosted thousands of performances and art happenings in its multiple event spaces.

The overall number of donors only increased marginally, meaning that the additional income came from the same number of customers donating more

In March last year it set out to improve a key aspect of its fundraising efforts. Although it has a 280-strong membership programme, the platform for taking lower-level donations online, by phone and in person was less developed. Increasing income from this area was seen as a priority with a focus on developing point-of-sale donations online and over the phone.

A workshop was held to train box office staff in asking for donations, raising comfort levels and discussing techniques for starting conversations with customers while a ticket purchase is underway.

It was agreed that having a specific appeal to trigger conversations would make it easier, providing a better context to potential supporters, such as why they are asking for support at any particular time, and ease team members into the habit of asking for support.

To this end, the fundraising team designed a campaign to raise money for the refurbishment and upgrading of the main building’s lift, and improving its overall accessibility. As a project with match funding, it provided the perfect opportunity to take ownership of a specific goal: raising £10,000.

Launched in August last year, the Brewery’s box office team asked each customer to make a donation when purchasing tickets over the phone, at the counter or online.

Improving data collection was another key objective. The centre’s Spektrix system provides segmentation tools that make it easy for the fundraising team to segment donors and flag potential prospects who could support at a higher level.

Making an ask for support at the point of sale enables the team to increase income, but also gathers data points that can clarify an individual's capacity to give or propensity to give, while painting a fuller picture of their connection to the organisation. The information collected by asking for support at the point of sale was fed directly into the Spektrix database for analysis.

Comparing charitable income between August to December in 2015 and the same period in 2016, Brewery Arts saw the following results:

Interestingly, the overall number of donors only increased marginally, meaning that the additional income came from the same number of customers donating more. The average amount donated per donor grew from £2.92 to £4.61, an increase of 58%. 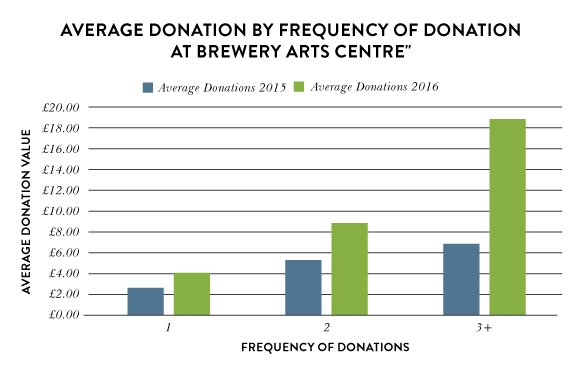 These outcomes clearly indicated a greater capacity to give within the customer base. Donors responded positively to being asked for larger donations. By asking for support, the box office team increased awareness of Brewery Arts’ charitable status, even where the initial response was a no.

Brewery Arts is also seeing a shift in how its customers donate. Many customers are now making donations offline when purchasing tickets over the phone or in-person. The number of customers donating online has dropped, although the amount donated has increased by 16%. So the online ask as currently designed is generating more from less.

This opens a host of opportunities. Improved customer engagement offers the promise of converting donors to become active supporters of, and advocates for, Brewery Arts. Asking for donations at the point of sale also increases the organisation’s pool of prospects, enabling the fundraising team to design targeted communications campaigns and other initiatives to increase income.

Brewery Arts has also seen how supporting the box office team internally can improve results. For future campaigns it has identified the following support structure:

The next step is to use the new data collected to better define the organisation’s segmentation scheme. Analytics available in the Spektrix system will help the centre cultivate its donor base, engaging those who regularly donate or who have donated a large amount.