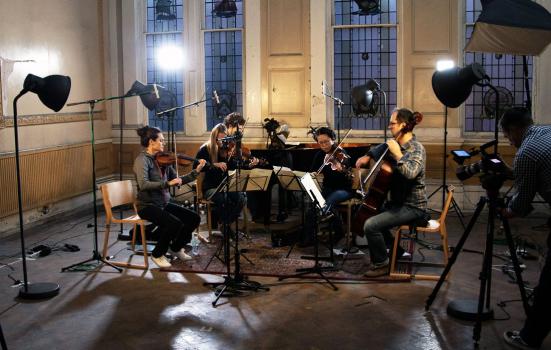 In a 2017 report on audiences for classical music, The Audience Agency identified that between 2014 and 2016, just 7% of classical audiences nationally were aged under 31, while people under 25 comprised just 2% of the entire concert-going public. I can’t help feeling that there must be lots of young people not currently coming to concerts who would have a blast at classical shows.

Creating content for fans online is a great way to stay in touch, build loyalty and sell tickets

Our recent production of Pierrot Lunaire, a song cycle by the Austrian composer Arnold Schoenberg, used a brand new, specially commissioned English translation, and was presented by Elizabeth Alker, who broadcasts on BBC Radio 6 Music, BBC Radio 3 and the online radio station NTS. The show was bookended by DJ sets, and a big chunk of the overwhelmingly young audience stayed late, drinking, chatting and partying.

We spend a lot of time thinking about how to create an environment where people who are not already in the ‘classical music club’ can come along and have a great time. We have found the seven principles outlined below to be important when shaping these experiences.

Importance of the brand

Brand really matters. A large part of our audience is not familiar with the music that we play – the repertoire really doesn’t figure in their decision to come to one of our shows. Instead, it is their relationship to our brand that informs their decision to attend. They are intrigued by the look of the gigs or the video content online, or they have already built up a level of trust in us as musical curators.

Since the emergence of Hilary Hahn’s iconic @violincase Instagram account (currently at around 143k followers), it has been clear that artists and organisations that connect with their audiences digitally are going to be able to reach a much younger crowd. Creating content for fans online is a great way to stay in touch, build loyalty and sell tickets. Other examples are violinist Ray Chen (@raychenviolin with 116k followers) and the cellist Sheku Kanneh-Mason (@shekukannehmason with 140k followers).

Anyone who thinks that concert halls are off-putting to young audiences has never been to a Final Fantasy orchestral concert of video game music. However, there is no doubt that by playing shows in alternative venues, we attract young people who wouldn’t normally think to book tickets to see chamber music - say at the Bridgewater Hall in Manchester. Alternative venues bring their own type of street cred to shows, and often have a regular audience hungry for new experiences. This sort of audience cross-pollination is incredibly useful.

Young audiences respond really well to narrative. It’s very rare that we try and sell a show based purely on repertoire. In the case of our recent Pierrot Lunaire production, the hierarchy of messaging for our campaign was as follows:

Note that none of this is about Schoenberg being a genius or about the importance of serialism in the Second Viennese School. We talked about that during and after the show, but as a marketing tool it’s not helpful.

It’s very easy for classical music to seem like a museum piece, but we have found that personal stories, challenges, triumphs and feelings can bring it to life. One of our most successful mid-concert chats occurred when a violinist spoke about the Czech composer Leos Janacek, a man who had a disturbing and inappropriate obsession with a young woman. Guided by our musicians, we explored this thorny area with the audience. They found the music all the more engaging once they realised that some of our players had complicated feelings about it.

It’s very easy for us to plan concerts designed to appeal to a younger audience, and then to place these shows alongside a main concert series. If we truly want to attract a younger audience to our work, this is simply not enough. We have to believe in our new formats enough to call them the main meal, not just the starter.

It’s not that the music isn’t enough. It’s just that even the best art goes down a little sweeter with a drink, a comfy chair and good friends to hang out with after the music stops. Generally, even the slickest organisation can make tweaks to the lighting or bar area to create a more enjoyable experience. Our goal should be to make it easy for young audiences to have a good time, while paying the music the respect it deserves.