Last year, more than 50,000 people took part in a creative challenge. Now the invitation to rise to the January challenge is open again. Michaela Tranfield has the details. 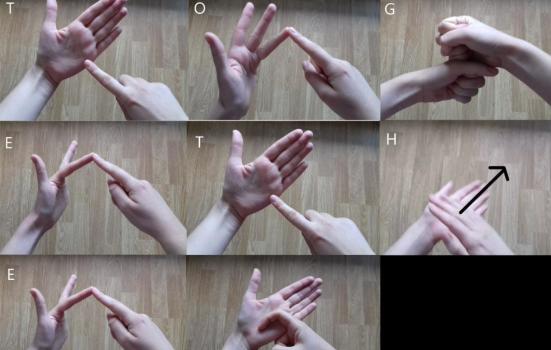 Making the word 'Together' in Makaton
Photo:

What’s the first thing that comes to mind when you think of January? Is it wondering how much longer you have to eat your way through the Christmas leftovers? The dread of going on your New Year’s resolution morning runs? Or maybe it’s the hope of new possibilities that come with the beginning of a new year?

When I spoke to the creative mind behind The January Challenge - and CEO of 64 Million Artists - Jo Hunter, she said that while January can be a difficult month for many, through the nationwide campaign co-created with her team, there’s something that is “genuinely for everyone”.

A broader campaign for social change

The idea of The January Challenge started in 2013 - before it had a formal title - as an impromptu way for Jo to reconnect with her own creativity. The concept was simple: she asked friends to send her creative challenges to do while she took time off work.
It inspired her so much that she posted a message on Facebook suggesting friends do the creative challenges with her. It was a lot more popular than she had expected.

Through word of mouth alone, over 200 people took part in the series of creative challenges the first year. Since then, the challenges have grown and developed into the January Challenge and participation rates have grown exponentially.

In 2021, over 50,000 people took part in the programme - adults, children, workplaces, community groups and schools. It has become a flagship programme for 64 Million Artists, who believe that everyone is creative. And when they are, it helps them to make change in their lives and in the world around them. As such it is both a creative challenge as well as a broader campaign for social change vital for making culture relevant.

64 Million Artists is a social enterprise, advocating for those who understand their community best. Jo describes them “community connectors”, weaving creativity into the way they make change within their communities.

They continuously pass the mic and use the medium of creativity to empower individuals and their wider communities. This extends to the way they work with associates and freelancers, like me, who they value and trust.

What began as a creative campaign, using creativity to inspire social change, through additional funding has evolved into a groundbreaking community builder which supports champions to sow the critical seeds of creativity within their communities and tackle the most prominent social issues in their local areas and the world at large.

Until recently, 64 Million Artists was funded predominantly through earned income rather than public funding. Although this offered the benefit of being able to be highly responsive to what they were learning from their community, it also meant they were limited in their offer to the public.

Building on diversity of thought and experience

Longer term funding from the Esmée Fairbairn Foundation and Arts Council England for The January Challenge is helping the organisation to grow its offer and work in collaboration with different communities across the country.

This has informed the way The January Challenge has evolved. Both the range and demographic of people who take part in the challenge has expanded to include a greater variety of people from different ages, abilities, cultural backgrounds and genders.

In 2021, the challenge incorporated greater diversity through bringing on board a team of three collaborators who curated the creative challenges that were submitted by the public. It included poet Lemn Sissay, journalist and author Yomi Adegoke and comedian Jess Thom (Touretteshero).

Wanting to build on this diversity of thought and experience to inform the upcoming 2022 January Challenge, the team held workshops asking former participants what they would like to bring to life. The conversations highlighted that instead of working with specific collaborators for the challenges, participants enjoyed the themes that emerged from tapping into their creativity every day.

Each programme is packed with ideas designed by musicians, chefs, sport stars, writers, makers, activists and the general public. We are working with a wider range of collaborators, from star chef Zoe Adjonyoh to youth MP for Birmingham Yumna Hussen and world class theatre company, Graeae…plus many more.

Feedback from last year’s challenge said that it helped with isolation during lockdown, inspired people to get back into old hobbies and enabled others to see that often the process of creating is more impactful than the final product.  And 96% of participants said that it had a positive impact on their wellbeing.

Next year will be the 10th anniversary of The January Challenge and we aim to develop it from a month-long showcase of creativity to a year-long celebration, expanding the offer to schools, care homes, hospitals, communities and workplaces across the country.

We want to spread the benefits of creativity far and wide, inspiring community connectors to make change through co-creation. So, are you ready to be part of a movement which champions everyday creativity and accessibility to the arts? Join us for The January Challenge 2022 and see where your creativity can take you.

Michaela Tranfield is an Associate at 64 Million Artists.