From Hull to Freetown and back

A project bringing together theatre-makers from Hull Truck Theatre and Freetown in Sierra Leone has overcome logistical and cultural barriers to develop new insight. Alina Cretu talks to Amanda Huxtable and Adam Pownall. 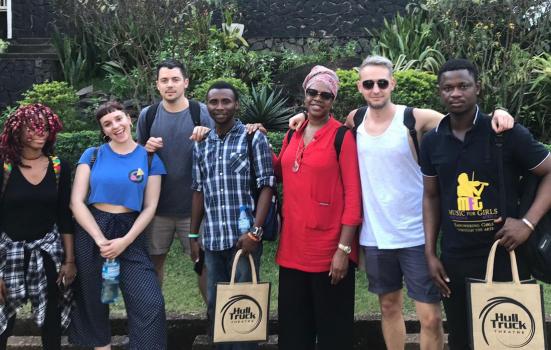 In 2017, an international project brought together six artists from the UK and Sierra Leone as part of the Hull UK City of Culture 2017 celebrations. The collaboration also contributed to consolidating the connection between Freetown and Hull, two cities that have been twinned since 1979. And it complemented the efforts that the British Council has been making over the past 75 years towards strengthening relationships with local communities.

“It was just incredible that never mind the language barriers and the different culture, they were totally there and with us in that moment”

Although the Hull UK City of Culture celebrations came to an end in 2018, the exchange project was continued with the support of the British Council, allowing the artists to develop work together. The Sierra Leone artists came to Hull last September, and, subsequently, the Hull artists, together with Amanda Huxtable, Changemaker and Artistic Associate, and Adam Pownall, Producer and Programmer, travelled to Freetown in November. The artists presented their collaborative work in the British Council building during its 75th anniversary of being present in Sierra Leone.

The final instalment of the project is due to take place in Hull in March, when the six artists will reunite once more to perform a sharing of their work as part of the International Network for Contemporary Performing Arts (IETM) plenary meeting.

Given its international nature, the project has been logistically complex and the barriers encountered during the exchange made us think about the issues that a collaboration with artists from outside the UK entails.

The biggest challenge was obtaining visas for the artists from outside the UK. Although the second stage of the exchange had been scheduled for May last year, the Sierra Leonean artists were initially denied their visas, and the visit had to be postponed to September.

But that aside, the project has been an invaluable opportunity for all parties to exchange ideas and learn from each other's experiences as theatre-makers, musicians, storytellers, directors and writers.

Adam said: "There's something for me about the fact that there will be a voice given not just to the Sierra Leone artists but to the Hull artists as well. They all have a voice as part of the project, and they will have a platform to share their opinions and ideas with audiences in March. The fact that the main theme of the conference is related to inclusion and diversity is a real key element of what we've worked on with this project."

Amanda said: "Sierra Leoneans are genuinely just building their country and the art infrastructure from a time that's been quite harsh for them both in terms of war and health. So to be able to engage with an international audience and group of artists and talk about the country and their craft is a major benefit."

Not only has the exchange benefited the artists, but it has also had a personal and professional impact on the organisers. Amanda observed: "As a Black British woman from the north of England with Jamaican heritage, the influence of Jamaica is everywhere to be seen in this work and on a personal level that was very moving."

Adam said: "A moment that keeps coming to my mind when we talk about what we have achieved is that when we performed our last sharing in Sierra Leone, we had an audience that was totally comprised of people from Freetown. There was a wonderful moment when Amanda and Mamadu led some forum theatre, a discussion based on how we can improve the situation based on the performance they'd just seen. The conversation was inspiring and uplifting – we had people shouting out because they were so passionate. It was just incredible that never mind the language barriers and the different culture, they were totally there and with us in that moment, and that was a real accomplishment for me."

From Hull to Freetown and back