How to… protect nature through performance 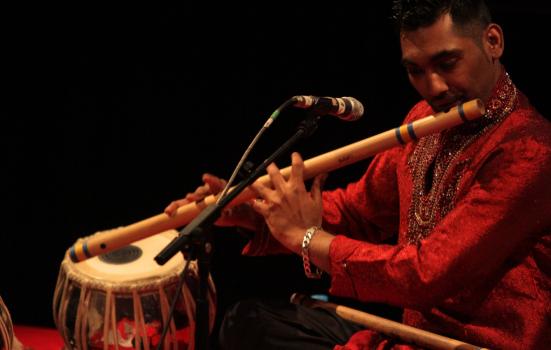 There has been a significant drop in the number of bird species over the past ten years, brought about because of changes in agriculture, pollution and climate change.

My work focuses on the acoustic ecology of the natural environment, and I’m currently interested in birdsong. For a while I’ve been documenting field recordings of birds and visualising their sounds as part of an investigation into the diversity of bird species and the wider issues of biodiversity.

The loss of bird habitats and changes in their behaviour – including migration and breeding patterns – is something that I can't ignore and has been the driving force behind recent work.

So when I was recently given the opportunity by Attenborough Arts Centre to respond to an exhibition of work by artists Lucy + Jorge Orta, whose work questions the social and ecological sustainability of our planet, I jumped at the chance. The result was a concert that allowed me to use my work with birdsong and address concerns about the falling numbers of birds: ‘The Red Species List’. It featured the songs of 25 birds, and even the harmonies and drones were created by stretching some of the birdsongs by eight thousand times or more.

But how can you do the same, and turn your creativity into something that also helps to protect nature?

Before you do anything, you need to be clear about what you’re fighting for. Once you’ve decided what you want to save, champion or challenge, it’ll be much easier to work out what form your performance will take.

The artist-led collaboration at the heart of The Red Species List happened in the way that it did, with visuals and a number of musicians responding to a soundtrack, because of a clear vision. I knew I wanted to reconnect music with nature, and I knew I wanted to do this by basing the music around the pitch of a bird’s voice as a key note. From there it was obvious to use the songs of UK endangered bird species.

Find your project, and be inspired by the small details. The concert’s name came from the traffic light system – green, amber, and red – to indicate a level of conservation concern, according to population and breeding status, and the videos we used featured a series of monoprints to reflect the decline of birds on the red list.

Finding the right people to collaborate with is incredibly important, and this includes practitioners, venues, promoters and funders. For this project I chose to collaborate with three musicians and found their contributions really energising. It brought the piece together and added narrative, rhythm and emotion to the concert in a way that I wasn’t able to achieve on my own.

Do this yourself. Artists often focus on their own work, but knowing that you have a supportive venue and an experienced set of creatives alongside you will give you a different energy. The Attenborough Arts Centre, where we held The Red Species List, offered a fee to create new work with the support of their technician, equipment and rehearsal space. And in getting the sounds together, I had support from Geoff Sample, author of the best-selling Collins Bird Songs and Calls audio guides, and members of The Wildlife Sound Recording Society.

Who knows more than you do? Can you take a cross-disciplinary approach and collaborate outside the arts?

Think beyond the performance

Putting on a compelling, provocative show is great – and necessary – but I knew that highlighting the important environmental messages of potential extinction and bird loss was not something that could be taken care of in one evening. Think in different mediums: music, print, video, audience interaction. We ended up doing something physical, by handing out a set of six souvenir postcards to the audience after the concert to help maintain the legacy. The feedback from audience members highlighted a real interest in art-science related work.

Part of the reason why we used art and music was to have something very accessible. It would be a memorable musical and visual experience, and raise awareness of environmental issues without the audience having to spend lots of time researching anything. That’s the key here – you’re trying to get a message out there. You could be the most knowledgeable and passionate person in the world, but if you’re not producing something that people can pick up and run with, it’s not going to have the impact you’re after. It needs to be relative to audiences - this encouraged them to think about their own relationship with birds and how they interactive with them.

Give people things to look at. Engage the senses. Be creative with this – what else could you be doing to draw people in? What legacy will this create and how can you move forward?

Lucy Stevens is an artist.
lucystevens.co.uk

How to… protect nature through performance