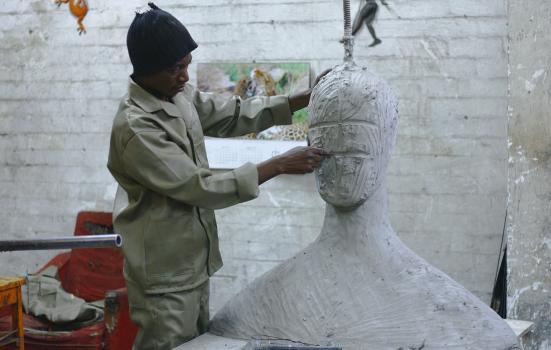 The Digital Marketing Collaboration on Unsplash

The Government and Arts Council England were praised during the Covid-19 emergency for fast, ad-hoc implementation of job retention schemes and strategies to financially support arts and cultural institutions. But as responses to the DCMS Committee’s inquiry into the impact of Covid-19 reveal, a vital tranche of the arts workforce was allowed to fall through the net, despite the prevailing equality and diversity rhetoric of funded arts.

Some 177,000 self-employed people work in creative, arts and entertainment activities, including theatres, art festivals, live music performances – most of which are still closed. Rising self-employment isn’t an accident; it has been incentivised by successive Government policies since the 1980s. Thirty years ago, 10% of artists and arts businesses were self-employed. Now, more than 40% of creative industries workers and three-quarters of visual artists are freelance.

The inherent fault lines exposed by Matthew Taylor’s 2017 report are colour-illustrated by Covid-19. In our market-led arts economy, it’s freelancers whose contracts expressly work to the employer’s advantage who are the most vulnerable to trends and shocks. But as ExcludedUK estimated, 60% of self-employed workers were ineligible for government support.

Submissions to the DCMS inquiry revealed that lack of access to financial support was far higher among freelancers doing creative, arts and entertainment work. Research by London-based Acme into artist studio holders and by Parents in Performing Arts shows some three-quarters of arts freelancers fell through a yawning economic gap. As Plymouth Culture described, these individuals experienced “overwhelming financial, physical and mental strain” due to the misplaced eligibility criteria of the government’s self-employed income support scheme (SEISS), which was then mirrored in Arts Council England’s emergency funds for individuals. More than a fifth of self-employed arts workers in North East England were ineligible for these schemes, accentuating the existing regional funding imbalances.

Just over 2,000 anonymous visual arts practitioners benefitted from Arts Council England’s emergency grants for individuals, and this group was drawn solely from those with practice forms already known to the Arts Council. Visual artists were pitted against freelance curators, visual arts educators, community animators, and independent visual arts managers and commissioners in a competition for crucial financial aid.

At the root of the self-employed visual artist’s economic plight is the much-vaunted ‘portfolio career’. This term conjures up a glorious myth of self-determination when set against their chances of sustaining art practices over time. Self-employed visual artists face stringent competition for work with poor artistic and economic scope. Artists’ briefs frequently demonstrate little sympathy or understanding of the differing social and economic circumstances of artists who reside outside commissioners’ immediate social sphere.

Examples of post-Covid work for artists include Thatcham Council’s commission for an experienced community artist and Appetite Stoke’s dead-set financial terms for a unique art work due less than a month after the application deadline. An unintended result when fees are fixed without scope to negotiate for the artist’s level of experience or professional and social circumstances is that only artists with independent means get past the gate. Visual arts is a low-pay, high-risk circus. As academics Richard Wallis and Christa van Raalte assert, by taking all the economic risk, freelancers carry an invisible burden that makes them uniquely vulnerable.

While the Arts Council sees itself as remaining at the helm when ‘stabilising and resetting the cultural sector’ and ‘restoring revenue streams’, the future viability of current trickle-down structures and arts organisations’ pre-Covid business models are being questioned.

There is a baseline flaw in how England’s arts policy is developed. An oft-cited concern is that Arts Council England fails to acknowledge or advocate for resources for the country’s broad gamut of grassroots arts activity because it doesn’t look beyond its regularly funded institutions for policy inspiration or insights. It fosters what has become a secretive, over-competitive funding climate. While the majority of the DCMS Committee inquiry submissions were from individuals, it’s only institutional and traditional leaders who’ve been called as inquiry witnesses.

Consortia in Cornwall, Croydon, Eastern England and West Yorkshire, amongst other places, reject the elitism of the Arts Council’s London bias and concentration of resources in National Portfolio Organisations, and argue for a flatter distribution model that reflects cultural variation and amplifies diverse voices. There is a rejection too of the inevitability of precarious livelihoods for artists and community-based ventures whose contribution and commitment to the arts has been taken for granted.

While views on how to achieve recovery are polarised, a common theme is capitalising on the crisis to reset the arts ecology within aspirations for a fairer, more equitable arts system. At one end of the scale, ‘blockbusters’ like What’s Next? and CVAN consortia – both dominated by bricks-and-mortar funded organisations – see the Arts Council’s Let’s Create strategy as the rightful vehicle to steer England’s arts and cultural recovery.

Others call for more a strategic intervention to achieve ambitions for social inclusion and community cohesion. Substantial redirection of funding to local authorities and region-specific strategies would better support and amplify responsive infrastructures and directly aid those currently relegated to the bottom of the arts resourcing food chain.

Aligned with existing cultural labour theory, the evidence of our new reality illustrates that current mechanics of making and measuring arts policy unintentionally threaten the fabric of the cultural ecosystem and perpetuate the waste of many talents by making professional participation the vanguard of those who can afford it. The new perspective of Comic Relief to ensure disadvantaged communities remain in charge of their own futures through acquisition of “agency, platforms and partnerships” is a philosophical framework well worth pursuing in future arts policy.

This article is based on the paper From plight to might: towards a new arts equilibrium, published this week.
Link to Author(s):
Susan Jones
Feature
Policy
Arts funding
Supporting artists
Covid-19
Coronavirus
Published: 18-11-2020

Strongly agree. Arts Council policy seems out-dated and astonishingly conformist.It’s as if the AC distrusts individual artists preferring instead a safer option, i.e. institutions. This is upside down. Independent artists who actually take the risk, do the creative thinking and the work should take top priority. Otherwise much of society’s creative talent will either simply never germinate or it will wither and die; then there will be nothing of interest or artistic merit for organisations to deliver!

First among equals?
Then and now