A creative approach to science and technology

Despite not teaching the arts, the University of Bath has always embraced creativity. Jamie Eastman explains how its new arts centre has become a hub of innovation for scientists and engineers, as well as artists. 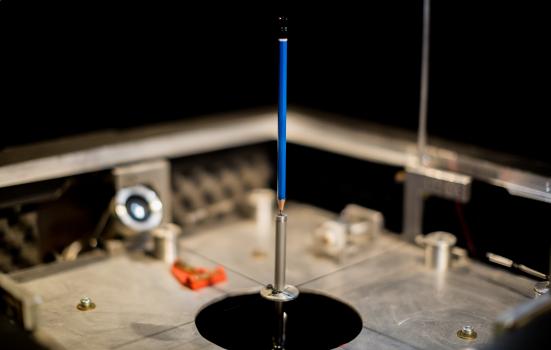 The Edge arrived in 2015 as the arts centre on the University of Bath’s campus. It’s a multi-functional arts space, an £11m investment incorporating spaces for exhibitions, dance, music rehearsals and more. Since joining in 2016, I have been struck by how this non-arts teaching university embraces the power of art and creativity to inspire its communities and engage with the public. During term time, the centre is like a fame school with students preparing for performances or socialising via life-drawing, music tuition or ballet classes.

We’ve presented shows by Akram Khan and hosted the Jerwood Drawing Prize. But it is the initiatives that show our ‘art in science’ and ‘science in art’ approach that demonstrate the true 21st century potential.

Our event series ‘Know How’ and ‘The Know Show’ transformed the galleries into sites for knowledge-sharing and production, shaped by artist commissions that explored such processes. Bath’s earth scientists shared concerns with audiences during National Climate Change Week against a backdrop of banners espousing the importance of learning in society, designed by London-based collective Vulpes Vulpes.

A collaboration between the sculptor James Capper and Bath’s Centre for Power Transmission and Motion Control produced a new prototype that enhanced both the artist’s ability to include hydraulics in his work and student research into automated robotic movement.

Co-Lab, our spring celebration of collaborations between dance practitioners and technologists, presented a work in progress by choreographer Jean Abreu, as informed by Bath computer scientist Leon Watts, who commented: “At the outset dance was a completely alien world to me with processes and values I could not understand. But I wanted to understand because I felt I’d taken my research on robot expressive behaviour as far as I could within the paradigm I was working.”

The two parties have since gone on to shape each other’s practices through ongoing projects. The initial time, space and encouragement the university offered, via the public engagement team and Edge Dance Programmer Charlotte Newman, allowed for the identification of a common language from which they could genuinely collaborate.

A similar process was followed for an initiative organised by the arts team, public engagement and Fringe Arts Bath, in which five artists produced works via in-depth dialogue with researchers, including colleagues from the Centre for Sustainable Chemical Technologies and Institute for Mathematical Innovation.

Keen to go further, we’ve now teamed up with Arts Council England to offer space and time to stimulate new artist and researcher collaborations. The happiness quotient caused by exercise will be looked at by Chinese-born British artist Aowen Jin together with sports psychology and performance colleagues. And shared interests in virtual reality and hyper-realistic digital representation will be exchanged between the Centre for the Analysis of Motion, Entertainment Research (CAMERA) and Mat Collishaw.

These are examples of what we expect to be a regular commissioning programme which, if we get it right, could transform the approaches of our scientists, social scientists and engineers, while also informing the creative process of UK practitioners. Many researchers are already supporting inquiries into death and dying, neuroscience, pharmacology, psychology and more. We are all engaged in furthering what it means to be human and our place in the universe.

Looking ahead, we hope to establish an environment that actively promotes developments in science and the creative industries that otherwise would not have occurred. Our current exhibition by Steven Pippin includes a working prototype of a wind turbine that aims to generate and use energy from naturally occurring static electricity.

Our electrical engineers remain sceptical but are intrigued by something that could only have been realised by a ‘no borders’ arts person (albeit one with engineering know-how). If by 2025 households across Britain have wind turbines made by in-home 3D printers, which contribute to the national grid in a cost-effective and sustainable manner, then that reality could well have been furthered via tests conducted by Pippin and Bath researchers here.

Jamie Eastman is Director of Arts at the University of Bath.
www.edgearts.org
Tw: @EdgeArtsBath

A creative approach to science and technology
My Gurus