Community theatre at its best

A play at Gloucester Cathedral with a cast drawn from local people sparked real change among participants and spectators alike, writes Fiona Crouch. 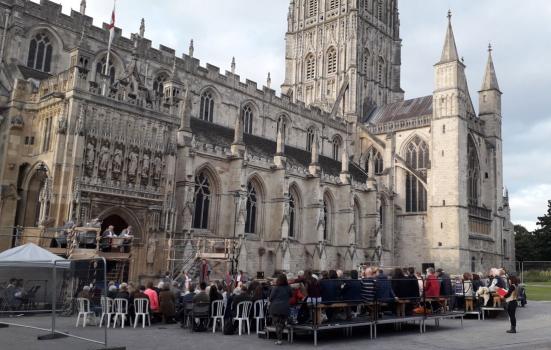 On a damp and overcast week in May 2019, Cotswolds theatre group Jenny Wren Productions lit up Gloucester with a community production of Jamila Gavin’s play ‘Coram Boy’ (adapted by Helen Edmundson). The show was the result of collaboration with the Cathedral’s community engagement team. The cast and choir were entirely amateur, and all 49 members were drawn from the local community – reflecting its demographic composition and ranging in age from 7 to 77 years.

The cast was recruited via open auditions that were advertised in local media and across social media platforms. From the outset, the production team was clear in its vision to encourage as many applicants as possible without previous performing experience.

Other production partners included the Everyman Theatre, Cheltenham, Three Choirs Festival, Marketing Gloucester and Gloucestershire Action for Refugees and Asylum Seekers. Partner organisations used their individual resources to help produce and promote the show. The Everyman, for example, was used as an audition venue and also provided box office and ticket sales services.

The project partners were determined to create a play that would both entertain the audience, and provoke people to think about society’s current inequalities. The story, set in London and Gloucestershire, features London’s Foundling Hospital, established by the philanthropist seaman Thomas Coram in 1739. The hospital provided care for babies whose mothers were unable to look after them. Gloucester Cathedral, with its strong and ongoing tradition of supporting those in need, provided a fitting backdrop for the story.

The production was a critical and box office success. By the end of the run, shows were selling out, and the Church Times declared it “a vividly imaginative and touchingly fresh production”. But just as important for the team were the social benefits.

These are demonstrated by the story of one young couple who watched the play. The pair were well-known to the Cathedral’s staff and volunteers – for all the wrong reasons (mainly anti-social behaviour and persistent low-level disruption during events). But in an area to the side of the stage set aside to enable non-paying spectators to enjoy the show, they became regular visitors, sitting entranced night after night. On the last night of the run, Libby, one of the couple, started to collect the autographs of cast members (a real confidence boost for a community cast!). As she was handed her signed programme, she told the front of house team that it had been the best night of her life.

Libby is now planning to attend the free follow-up workshops which are being held in in local community venues and secondary schools to continue the production’s social impact, and inspire the city’s next generation of creative producers. Led by experienced directors and actors, these events focus on attracting groups who might feel excluded from the arts. Libby also intends to apply for a summer school drama bursary at the Everyman Theatre. Even more crucially, she and her boyfriend have formed positive relationships with the community engagement team at the Cathedral.

The production also led to benefits for the cast: despite their differences, they quickly became a cohesive team. The youngest cast member said the best thing about the show was all of the new friends she had made. Such friendships have continued to flourish with post-production social events. And some cast members have been inspired to continue their involvement with the arts as workshop facilitators or performers in other productions.

As a member of the production’s front of house team, I noted several factors in the success of ‘Coram Boy’ that other community productions could learn from:

Fiona Crouch is a Postgraduate Student in Cultural and Creative Industries Management at Northumbria University (due to complete Autumn 2019).

Community theatre at its best