How do we enable people to create real change through art and culture? David Price believes it's through harnessing the ‘power of us’. 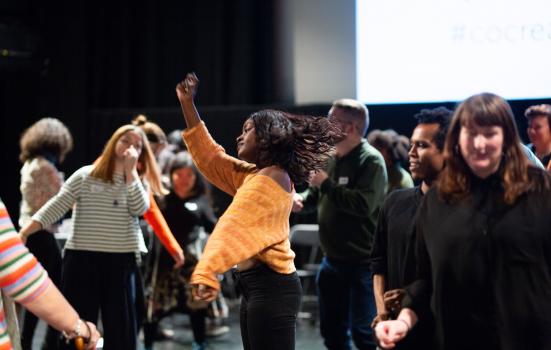 On a cold, dreich afternoon in November ’21 in Glasgow, 100,000 climate activists marched in protest at their exclusion from the COP26 conference taking place. They had travelled from all corners of the globe to vent their frustration in a furiously joyous manner. At the same time, over 300 climate justice protests were taking place globally. Collectively, their demands were simple: ‘The crisis will not be solved if those most affected are not central to the solutions’.

Meanwhile, the COP26 negotiators continued to meet in isolated, heightened security, largely ignoring young people and their champions, Greta Thunberg and Vanessa Nakate, by neglecting to invite them to speak in the main hall.

For the climate emergency, read #blm, #metoo, and a host of other social justice campaigns. My book, The Power of Us, charts the phenomenal growth of social movements which are now more effective, more vocal, more impactful than ever before. In short, communities are now outperforming bureaucracies.

Central to their success has been a simple insistence: ‘Don’t give us your solution, work with us to fix it.’ In other words, don’t mandate, co-create.

In this context, the international Co-Creating Change festival, hosted by Battersea Arts Centre this month is one of the most important events of the year. I'm proud to have helped make it happen and look forward to hearing how people around the world have responded to the crises of the past two years, in their differing communities and contexts.

The Covid pandemic has reminded us that when needs must, there's no them and us. Mercedes F1 team & medics reinventing CPAP machines; universities and pharmaceuticals collaborating to shrink vaccine timescales; breweries distilling sanitising gel instead of gin; school kids making face shields and PPE when our government signally failed to provide it. Communities outperforming bureaucracies...

Without fanfare, the arts and cultural sectors have performed heroically in switching their purpose from keeping people entertained, to keeping them alive and fed. Slung Low, in Leeds, became a community hub; Arts & Homelessness International worked to make sure that people were safe, and heard; individuals from working class communities working with touring arts organisations to support and inspire others.

The challenge now lies in ensuring that the care and creativity seen during the early stages of Covid, serves as a model of post-pandemic co-production.

Nothing about us, without us

Within the arts and cultural sectors, there’s nothing new about ‘co-creation’. I was one of 12 so-called ‘inaugural community animateurs’ (so named so that no-one could fathom what it was that we did) appointed by Arts Council England during the late 80’s. Some of my then colleagues - Pete Moser, Duncan Chapman, Mary Keith - developed the finest co-creation chops I’d ever coveted.

But we were all stumbling blind. Sometimes the results were glorious. At other times, they were well-meaning but cringeworthy - at least mine were. No matter, we were doing our best to wrestle the repertoire-led model that still dominates, from the cultural behemoths.

Taking high culture to the masses. I remember a community production from a major opera company outreaching Blackburn that I was asked to evaluate. On the opening encounter, a single mother was told that she wouldn’t be able to bring her child to workshops as they had no creche. Nothing about us, without us, indeed.

In the 40+ years of co-created work in the UK, we’ve learned some things, lost some things, and some things will never be resolved. We’ll never get the balance right on who has the power. As professionals, we can’t pretend that we’re operating from the same basis as the people we serve.

No-one is coming to save us

But we can ensure that they’re in the room when all the key decisions are being made. Similarly, we’ll always have to balance the desire to achieve the highest possible artistic values, without putting words into the mouths of co-creators. Getting it right isn’t as important as being your authentic self.

In recent years, there has been significant growth in the theory of how to work equitably with co-creators (not least through the work of Battersea Arts Centre, and Arts and Homelessness International). And the global reach of co-creation can be seen in the people taking part in November’s festival. Contributions from Syria, South Africa, Argentina and Australia illustrate the universality of the desire for self-determination.

To be able to work with creators on an equal footing (not 'giving them a voice') is the true 'levelling up' that Boris Johnson mindlessly parrots. While it’s easy to be despondent about the daily erosion of democratic norms, that has to be balanced against a renewed understanding that no-one is coming to save us - but no-one needs to. As David Tovey said: “The value of arts in community life has, I would argue, never been higher and it has resulted in a potential Golden Age of arts and social change.”

Real progress has been made during the past 18 months, and it cannot be squandered by a desire to 'get back to normal'. If we listen carefully and show humility, there's no reason why the co-creation that has seen us through so many of these dark days, can't become a permanent fixture in our cultural and social lives.

David Price OBE is author of The Power of Us.

The international Co-Creating Change festival will take place digitally and in person 22-26 November 2021. Tickets are Pay What You Can.