A heritage project celebrating stories from LGBTQ+ young people in Brighton has resulted in a digital archive, as well as new photographic work. Juliette Buss explains why the project has been so special for everyone involved. 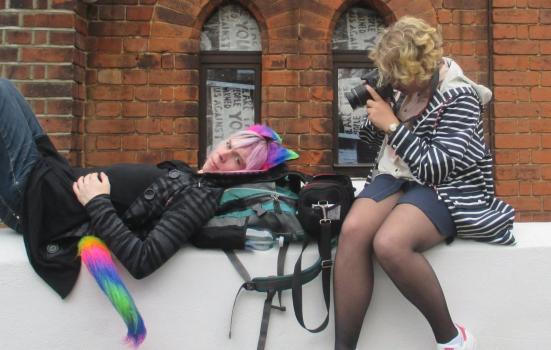 Photoworks has long been committed to promoting diversity and inclusivity, and bringing marginalised communities from the periphery to the centre. Consultation with young people identifying as LGBTQ+ or U (unsure) revealed significant levels of anxiety, vulnerability and isolation.

Brighton, the queer capital of the UK, has a vibrant LGBTQ+ community, but many young people just coming out, or questioning their sexual orientation or gender identity, weren’t yet part of this community, so they couldn’t learn or benefit from the lived experience of others.

It has enabled fresh voices to be heard and helped equip them with the tools and skills to face, embrace or come to terms with life-changing challenges

Our heritage project Into the Outside was designed to create opportunities for young people to engage with Brighton’s rich LGBTQ+ past and explore how issues faced by young people identifying today compared with those in the past. Through an open call we recruited two groups of young people to take part (13 to 16 years and 17 to 25 years) who did or didn’t identify. We originally planned to work with the two distinct age ranges, but after the groups met they were keen to work together, so the two became one.

Key to the project was artist Helen Cammock who facilitated the programme of workshops for participants. Helen’s practice uses a range of mediums including photography, film and performance to explore invisible histories, inequality and social justice. Helen also worked as a social worker for more than ten years, so she brought lived experience, a unique mix of visual arts skills and highly specialised youth expertise to the project. She established a safe, creative space and instigated an enquiry-based approach using photography.

Tasked with creating a queer youth archive representing their personal experiences and perspectives, plus those of other young people across the city, the group started with skills development – oral history training, archiving and photography. They undertook extensive research, spending days with archive material, visiting exhibitions in London museums, and listening to talks from a range of arts and heritage professionals.

The group engaged with archives held at The Keep, a centre for archives including Brighton Ourstory, which was set up in 1989 to collect and preserve lesbian and gay history. They also looked at the National Lesbian & Gay Survey, a collection of personal writing and ephemera submitted between 1986 and 1994 addressing issues such as coming out, homosexuality and the law, and the impact of HIV and AIDS. People of all ages had contributed to the survey, but a significant proportion of writing by young people in their late teens made it particularly relevant.

Engaging with queer heritage through the archives has had a profound effect on our participants, with one of the group remarking: “History is entirely cyclical and I want to be part of that cycle. I want one nervous 15-year old to connect with the archives we have created in the future in the same way I have.”

The group then responded through photography, creative writing and film, creating personal bodies of work – giving voice to their own hopes, challenges and experiences. The breadth, range and quality of the work the young people produced is extraordinary. They became confident leaders and ambassadors, forming a collective, and inviting other young people to participate by running pop-up oral history booths and professional photography studios at Pride, Trans Pride and local libraries, collecting over 100 oral histories for the archive.

Photography played a central role in the young people’s learning experience. From day one, they used cameras to chart their progress, document their research and articulate their ideas. They used it both as a learning tool to support their enquiry and as an artform, looking at contemporary practice, experimenting with ideas and developing personal portfolios.

The work was presented professionally for Brighton Photo Biennial 2016 and also for LGBT History month. It was seen by 18,000 people. The collective also gave numerous talks and tours, gained accreditation and undertook work placement opportunities.

The personal accounts of others in recent history, particularly those that have been marginalised, have inspired, informed and galvanised the group. This really has been, and continues to be, a special project for everyone involved. It has enabled fresh voices to be heard and helped equip them with the tools and skills to face, embrace or come to terms with life-changing challenges. As one participant commented: “The amount of people I can turn to has increased within and outside of the community.”

We are currently using it as a CPD tool and have developed additional learning resources. Plans for a new exhibition co-curated by the collective are in the pipeline, along with further phases of Into the Outside beyond Brighton.

The project was run in collaboration with Brighton & Hove Libraries Services, the Mass Observation Archive, the East Sussex Records Office and Queer in Brighton and supported by the National Lottery through the Heritage Lottery Fund.