Bringing art to the people of Liverpool

Public art plays a vital role in engaging people. And giving cultural venues a voice in cities is crucial to creating a more equitable city for all, writes Laura Brown. 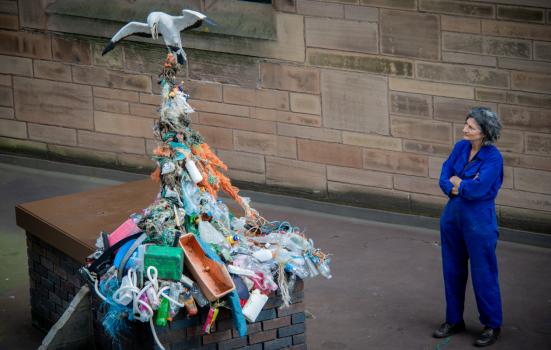 What Jane Jacobs describes as “the ballet of the good city sidewalk” creates a through line of art and public spaces. In her New York neighbourhood, the way the pavement works, its complexity of ordered chaos, of constant movement, change and evolution, is a “dance” that keeps the city relevant and vibrant.

When we inject physical art into the public realm, we allow the city to see itself reflected, its mixed-use purpose and economy highlighted in the colour, animation and engagement of art - from illustration in store windows, to dancers gathering for a seemingly ad hoc routine to the delight of outdoor diners.

Liverpool BID is one of the 300+ business improvement districts in the UK working to improve city centres. Together with Liverpool Biennial they are in the final year of their five-year public art strategy for the city. Public art has long been an aspect of its work, collaborating with organisations like producers Open Culture on events and festivals such as LightNight, or with Levy Payers within the BID area such as the Royal Court Theatre.

The city's public art strategy is designed to animate Liverpool’s Commercial District, notable for its high rise and historic buildings, its narrow grid street format and civic squares. It provides engaging and creative work for those living and working in the district, such as a series of public art commissions to create interconnecting pathways through it, improving its sense of place and creating a cultural destination.

In Liverpool the BID has been an important player in bringing conversation about the public realm to the fore. BIDs were once seen as creating animation by adding hanging baskets to a neighbourhood or adding a lick of paint (neither are intrinsically bad, of course).  But in Liverpool, as the city expanded, there has been a need to consider how cultural identity can play a role in public spaces.

Although the city regularly sees cultural activity spill out of gallery spaces into the streets, much of it is spectacle. Increasingly though, art in the public realm is providing cultural visibility. For example, Brazilica, Pride, Homotopia, Liverpool Arab Arts Festival, Positive Vibration and others help to raise the visibility of Liverpool’s different communities and cultural heritage. In supporting this, the BID helps to make the city centre more inclusive as well as animated and entertaining.

Art in the public realm needs to be accessible but it also provides a platform for art in a different way from a gallery or museum. The Liverpool Plinth is on the corner of Liverpool Parish Church is an example of this, hosting an annual prize for a northern sculptor. With artists selected by Open Call, it is an important physical and cultural platform for the display of their work in the public realm.

When Covid-19 forced the closure of arts institutions, the use of public space for hospitality and animation became an important element of the city’s cultural recovery. Liverpool Without Walls brought together Liverpool BID, Culture Liverpool and Liverpool City Council to explore how streets and pavements could be repurposed through art, culture and hospitality to support business and help to keep city centre visitors engaged while they could not be together indoors. Arts commissions programmed in 2020 included spoken word performance, music, busking, murals, a LGBTQIA art crawl, theatre, dance and a historical tour.

The pavement ballet does not have to be confined to the sidewalk. How we animate and add colour to empty spaces is also how we can animate high streets with empty units. If an empty shop has art installed for six weeks and a day, business rates are waived. It not only gives artists studio space to create and exhibit but also gives retail landlords an idea of how creativity can transform a neighbourhood. Everyone benefits.

What can other BIDs learn from Liverpool? Much lies in collaboration, a basic necessity in a city of half a million people, and a city-region of a million. But artists frequently voice concerns that they don’t know what their rights are, nor what opportunities are available, who to speak to or how to approach collaboration.

BIDs have this knowledge at their fingertips and can act as a broker between business and the arts. Local authorities do not have complete ownership over a cultural programme and, with space becoming more scarce, the chance to spread out into the public realm or into the traditional high street raises visibility and helps to engage more people.

From a purely economic perspective, higher footfall is good for business. Many BIDs are committed to increasing this city centre footfall and art is an engaging way to do that. For the arts, art in the public realm is a gateway drug to a venue. After 15 months of staring at screens perhaps there is a need to bring the art to the people, in a way they do not expect.

Laura Brown is a producer and consultant.

Bringing art to the people of Liverpool