Technology has been working miracles delivering live performance online. Jonathan Vaughan asked Julian Hepple about the magic – and the mania – of making music at a distance. 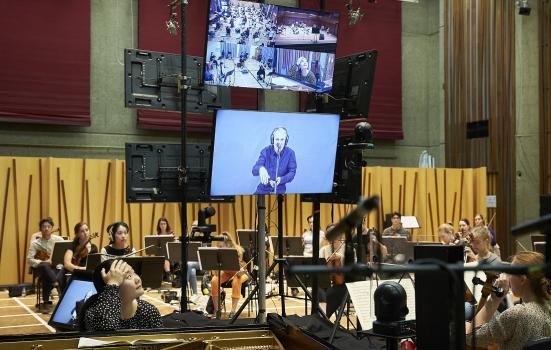 Early in Evelyn Waugh’s 1945 novel Brideshead Revisited, protagonist Charles Ryder describes the contrast between the brutality of army training during the Second World War and an unexpected recollection of joy upon revisiting Brideshead. He describes the sudden cutting short of a voice “that had been bawling in [his] ears, incessantly, fatuously, for days beyond number” and how the ensuing silence is gradually replaced by “a multitude of sweet and natural and long-forgotten sounds”. He attributes this to “a conjuror’s name of such ancient power, that, at its mere sound, the phantoms of those haunted late years began to take flight”.

Call me fanciful but it was this that bounced around my mind as I arrived back at Guildhall School, after the longest silence in the building’s history. The bawling in my ears had been the daily Government Covid-19 briefings; the “ancient power” was, of course, music itself. Imagine my joy at stepping back into the building and hearing the wonderful sounds of human beings making music in every corner.

The occasion of my return was the final of Guildhall School’s Gold Medal, our most prestigious music prize, which consists of a live concert in the Barbican Hall where the finalists perform with the Guildhall Symphony Orchestra. High above the entrance foyer in the school hang two enormous oak boards, emblazoned with the names of past winners. As is my custom each year before the medal I took a few moments to gaze up at the long list and pick out some familiar names – Benjamin Luxon, Bryn Terfel, Tasmin Little and Jacqueline du Pré.

The Gold Medal has been running for 105 years – every year since 1915 – so none of us could entertain the idea that Covid-19 would get the better of us.

A different type of connection

The problem was: how can a 100-piece orchestra play together, socially distanced, without a football stadium? The answer came to us in the shape of our resident genius and Head of Recording and Audio Visual, Julian Hepple.

Julian’s expertise gave him a unique perspective on the problems. He explained: “Nothing will replace the magic of 100 people working together in a physical space to alter the course of the very particles in the air around them, but that’s exactly what happens when an orchestra rehearses.

“The result moves us in ways we cannot explain. Somehow, we learn more about who we are and what the world is. We make sense of our past and we look forward to the future. We hear a composer’s perspective on the human condition, and we feel less alone. These 100 people make the air around them dance, and we are changed merely by hearing it. It has been this way for hundreds of years.

“But then there was lockdown. How could we keep this magic alive? Could technology really save us? Could something so cold and informal as performing to a screen really replicate the shared communal experience for both performer and listener? Using the latest technological advancements, we set about devising a system for synchronous collaborative rehearsal and performance. We cannot control the number of people allowed in the room, but we could control the air coming from your speakers or headphones.

“The primary problem is latency. Latency is the amount of time between an event, and someone hearing and seeing that event. It is one of the many reasons why a Zoom call doesn’t allow for the same type of connection as real-life conversation. You are watching something I said or did anywhere between 50 and 500 milliseconds ago. It is inherently not in the moment. Our aim was to create a system that reduced latency as much as possible while maintaining technical benchmarks of quality and synchronous interaction.

“The answer came from a combination of several different technologies and a bit of common sense. We took elements of digital workflow used in large scale stadium rock touring and applied them to orchestral rehearsals. Who knew that the audio system designer for the band Tool could be so instrumental to our orchestra performing once again? We used elements of video broadcasting technology used in the Royal Courts of Justice and a few ideas from an ice hockey arena installation to create our network.

“The result was worth the hard work. Within minutes of our orchestra sitting down, socially distanced within each section in four separate rooms across two buildings, a rehearsal of Rachmaninov’s Piano Concerto No.2 was in full swing. The effect was quite profound and has stayed with me. While the community experience of having everyone in the same room will never be replicated, when I put my headphones on, it didn’t seem so far off.”

After several successful rehearsals, the concert took place across these four rooms. Three spectacular finalists each performed a concerto with the orchestra, which was broadcast afterwards via our website. The low-latency technology worked like a dream and we received messages of congratulations from all over the world. As far as we know, no one has attempted anything quite like this before with an orchestra. There were adjustments to be made: for example, our Conductor, Richard Farnes, observed that the sound of the timpani and double basses was actually reaching him sooner than it would have in a live room, owing to the distance from the back of the platform.

Was it better than ‘real life’? Of course not. But the winner, pianist Soohong Park, did say it was better than any of the many orchestral experiences he’d had before.

If the choice was this or do nothing, it was worth it. Our students had an experience they will never forget and showed real fortitude and resilience in adapting to a brave new sound world. Not only did we prove that it is a workable model, but we also reached a far greater audience than we would have with our normal live event at the Barbican.

I’ve always believed in the transformational power of music to change people’s lives, but I’ve never been so aware of the human need to hear and make music. The Gold Medal performance felt like water in a desert. It fed something deep within all our souls and answered a basic human need – the need to express those elements of the human spirit which are beyond words.

Jonathan Vaughan is Vice Principal & Director of Music and Julian Hepple is Head of Recording & Audio Visual at Guildhall School of Music & Drama.