Praised for its beautiful acoustics, the main hall of the Concertgebouw in Amsterdam is one of the most famous concert halls in the world, says Jan Dieters.

This privately funded building was completed in 1888, and for over a century has been the classical music centre of the Netherlands. In 2001 we counted over 830,000 visitors for over 800 performances, including over 55,000 children and young people up to 27 years of age. For the youngest amongst them, highly successful children?s concerts are organised on Saturday and Sunday afternoons, and those a little older feel particularly at home at the less formal Summer Concerts and the Sunday Morning Concerts. Entrée, the Society for the Young Audience of the Concertgebouw and the Royal Concertgebouw Orchestra, also organises a number of special activities and events for children and young people. 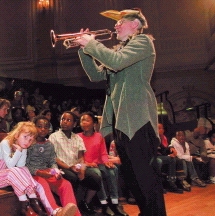 In all of these activities, parents play a crucial role. Without their initiative, children would find it hard to visit this historic building and listen to the beautiful music. In part due to a lack of funding, schools find it increasingly difficult to ensure that culture (and specifically classical music) is given a serious position in the curriculum. An even greater number of children are growing up in a world in which they are unable to become acquainted with the rich cultural heritage that is present in the Netherlands. A lack of knowledge then results in a lack of affection.

The Concertgebouw wants to create a venue where all children and young people can experience the very best that music has to offer. Rather than waiting for a government initiative, we chose to take steps to further develop new audiences for the future. To this end, we have recently put together a special educational programme in which, within the context of their regular education, children and young people can sample and enjoy our musical programme. The education programme is a reflection of our broad programming: not only is classical music offered, but also world music, jazz and contemporary music. It is constructed in co-operation with other cultural initiatives (orchestras, ensembles, museums, theatres and so on) and always in conjunction with educational specialists.

While they are at school there are four occasions when pupils can visit the Concertgebouw: during the first and second halves of their primary education, and during the first and second halves of their secondary education. There are large-scale projects in which all the members of a particular group or class can participate free of charge, and there are projects for schools with a special interest in culture. This structure makes it not only possible to focus on special age groups and their different levels of development but also on the different levels of development within an age group. It further promotes cultural participation by children from completely different backgrounds. With a view to ensuring that pupils receive the best possible preparation before their visit to the Concertgebouw, educational material or workshops are specially developed for all projects ? pupils are actively involved, sometimes by just singing a song or playing music from a score or playing together with professional musicians, and in some projects they actually compose and perform their own music.

The educational programme was introduced during the school season 2001?02 and more than 16,000 pupils and teachers visited the Concertgebouw. After each project evaluation forms were sent to the schools to improve the programmes for the next season when over 20,000 youngsters are expected.

The programme is largely made possible with the financial aid from private citizens and private foundations. Only 25% of our annual education budget of £500,000 is funded by the government, which reflects the tradition of the Concertgebouws? private support system.