mind the?gap is one of the country?s leading professional theatre companies working with learning disabled artists, writes Sally Bailey.
Formed in 1988 by its current Artistic Director Tim Wheeler, it has developed over the past 14 years into a flourishing performing arts company with an annual turnover approaching £500,000, employing eight full-time staff and numerous freelance arts practitioners. Our range of theatre performance, education and development projects is designed to provide a series of stepping stones for people with a learning disability to travel from, for example, a recreational experience with our youth theatre or as a workshop participant, to professional activity working as an equal alongside non-disabled actors in one of the company?s national touring productions.

Until 1999 our national touring productions were original, devised work based on the direct experiences of the learning disabled actors. However, creating such tightly defined work meant that there were people who were absent from our audiences. It was easy to attract people who were interested in learning disability, but it was harder to reach a wider theatre-going audience. So, in Spring 2000 we produced the first in a series of accessible adaptations of well-known texts that had links with disability issues. Tim Wheeler, working with writer Mike Kenny, adapted John Steinbeck?s ?Of Mice and Men? for a cast of three including a learning disabled actor, Kevin Pringle, in the role of Lennie, the learning disabled character in the story. He proved to be a definitive Lennie ? and the production proved to be a landmark in our development. ?Of Mice and Men? achieved two near sell-out tours in 2000 reaching approximately 7,000 people; we had moved from the margins to the mainstream, and engaged young new audiences. Interest in the company from small and mid-scale touring venues soared and demand has outstripped supply for subsequent tours. We have also had the opportunity to play longer runs in fewer venues which has meant greater scope for audience development, not to mention less stress for the touring team! 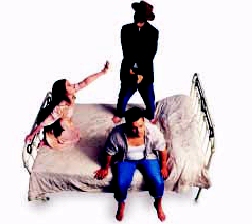 ?Of Mice and Men? was followed by ?Dr Jekyll and Mr Hyde? in 2001 and ?Pygmalion? in 2002. Getting permission to adapt Shaw?s original script was another significant achievement for the company, as Bernard Shaw?s estate trustees rarely grant permission for any adaptation of his work. Members of the Shaw Society said that the production ?opened their eyes to new ways of presenting Shaw?s work?. Spring 2003 sees our first national touring collaboration. From February we will be touring Mike Kenny?s contemporary adaptation of ?Don Quixote? working with members of Northern Stage Ensemble, realising our mission of bringing disabled and non-disabled actors together to work as equals.

Alongside the touring work, we run accredited training in theatre skills for people with learning disabilities. A three-year pilot project, ?The Making Waves Apprenticeship?, enabled us to develop a programme that was accessible to people with learning disabilities. One of the aims of the pilot programme was to launch some of the graduates of the programme in their own user-led theatre company. Six graduates have been working with us for the past year developing the new SFX Theatre Company. Other graduates have joined the national touring company and one has had two major television roles. We now run the Making Theatre Training Programme which condenses the most successful elements of the three-year course into one year.

For future recruits, we run a youth theatre for learning disabled young people aged 13 to 19, and unsurprisingly, with all this activity going on, we are rapidly outgrowing our current premises in Bradford. The next major challenge for the company is to establish a permanent fit-for-purpose base, and we have received a development grant from the Lottery Capital Programme to enable us to identify our needs and explore different options, and to develop our organisational capacity before we embark on this exciting new phase in mind the?gap?s life.