Christine Hamilton considers how much has changed since the publication of her report on women in the Scottish arts sector three years ago, and what still needs to be done. 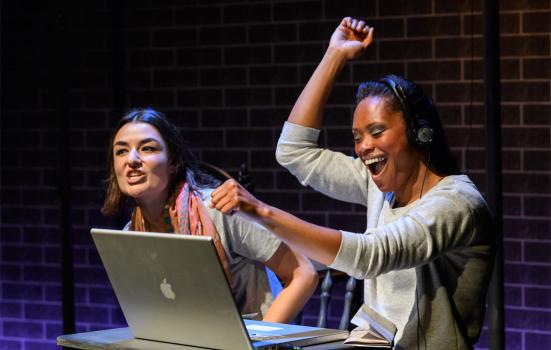 Stellar Quines production of The Last Queen of Scotland with Rehanna MacDonald and Patricia Panther
Photo:

On International Women’s Day in March 2016 I published the Where are the Women? report, an analysis of creative roles in publicly funded Scottish theatres for the year 2014/15. In gathering the raw data, I was supported by a motley crew of writers, actors and others in the arts who, along with me, worked on a voluntary basis on a subject we thought was important.

While theatres have a lot of choice when it comes to talent in writing, directing or performing, this is not the case in the area of design

Our main concerns were to establish just how well or badly women fared in securing creative roles, to encourage theatres to look at gender equality when engaging the creative team, and to call on Creative Scotland and the Scottish Government to capture and publish this information on a regular basis.

Data was gathered from 24 theatre companies, 23 of them regularly funded by Creative Scotland (the National Theatre of Scotland is funded directly by the Scottish Government). The report covered just under 1,700 roles, comprising performers, writers, directors, designers, composers and musical directors. The headline findings were as follows:

The most common response was that it wasn’t as bad as people thought it would be. The fact that women occupy around 40% of acting, directing and writing roles suggests that it would take little for theatre companies to take a careful look at their approach and achieve gender balance with minimum effort.

There is not enough money, or hence enough work, for theatre-makers in Scotland (or anywhere else), but what the findings tell us is that in the year in question, women fared better in some key roles than many had predicted.

The bigger picture for theatre in Scotland is that new work (by which I mean new plays and re-workings of classics or adaptations) is key to the repertoire. While the canon of English-language theatre provides an important resource, it does not dominate, and there is no large canon of Scottish work that is central to the repertoire. This allows for flexibility in programming.

Where the data does flag up an issue, it is in the area of design (set, costumes, lighting) and music (composers, music directors and sound designers). While theatres have a lot of choice when it comes to talent in writing, directing or performing, this is not the case in the area of design. A more sustained intervention is required in these areas.

So what has happened since? I presented the findings to a meeting of the Federation of Scottish Theatre in December 2016 and encouraged theatres to pick up the challenge. While the report itself presents the data in aggregated form, with no company identified, I sent the relevant data to each of them for their information in the hope that they might gather and publish their own data and contextualise it for their own situation.

There is no evidence of this having happened. However, some developments in programming provide encouragement. For example, the Citizens Theatre is mounting a season of three plays by women, including two re-workings of classics and the remounting of a new play.

And as a direct result of the report, Stellar Quines, a theatre company that primarily focuses on work by women, has organised a series of free classes to tackle the lack of women in sound design.

We need to repeat the exercise in order to determine if 2014/15 was an unusual year or if there are any trends emerging. I am in discussion with Stellar Quines about undertaking research for the year ending March 2019. We are hoping that through support from the Federation of Scottish Theatre, we can gather some of the data directly from theatres themselves. This might address, in particular, the issue of those who describe themselves as non-binary or prefer not to say. Otherwise we will do as before and collect data from published programmes and websites.

In addition, I plan to undertake some qualitative research and find out what the barriers might be – beyond those we might assume.

The most disappointing outcome of the initiative has been the reluctance of Creative Scotland to engage. While all its funded organisations are required to adopt policies on equality, diversity and inclusion, there is no attempt to gather or publish data on how far these policies are succeeding. This is particularly disappointing since some theatres, and the sector in general, appear to be taking this seriously. There is a nearly good news story here, that needs to be further explored.

Christine Hamilton is a researcher in cultural and creative industries policy.
christinehamiltonconsulting.com

A 'nearly good news' story
Yes or no, that is the answer