Many children steer well clear of opera, but the artform has allowed primary school pupils in Norfolk to discover new heights of confidence and creativity. Genevieve Raghu explains how. 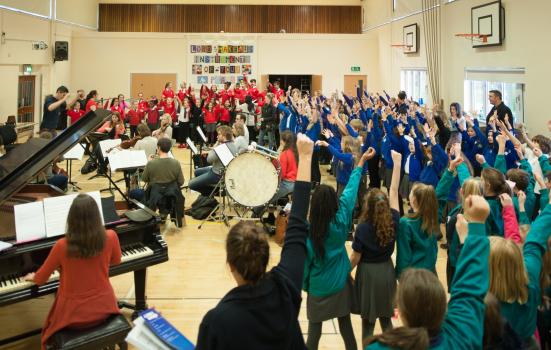 An openness to trying new things is surely an important attitude to be encouraged in children. New experiences make us curious, inquisitive and help us develop interests and skills. We may even learn something new about ourselves. But if the first experience of trying something new is a bad one, it can stick in the memory for some time.

Key to our residency was its length, as we had the time to build meaningful relationships with teachers and pupils

I set up Into Opera last year to get more people into opera. I wanted to begin with a project for primary schools that would shape early memories of the artform and create a first opportunity to encounter opera that was imaginative, empowering and memorable for all the right reasons.

We provided a 16-week artistic residency in four primary schools in Norfolk. At the heart of this was A King’s Ransom, an opera I developed with classical composer Patrick Hawes. Crucially, this was an opera written for children to sing. On a weekly basis, children worked closely with the composer, librettist, music director, stage director, choreographer and designer, exploring all that opera encompasses: music, drama, dance, the written word, design and more.

Teachers worked alongside these artists and used our cross-curricular education resources. I wanted the project to be a community builder, bringing the four schools together to stage the world premiere of the opera, supported throughout by professional artists. We then extended the project to six more schools, offering a workshop, our resources and the chance to see the production.

We worked with seven to eleven-year-olds, the majority of whom had never heard of opera before. By the end of the project this was a different story. Key to our residency was its length, as we had the time to build meaningful relationships with teachers and pupils, tailoring workshops to suit each individual school.

A helpful tool throughout were the observation forms we invited teachers to complete at workshops. These enabled an ongoing dialogue, providing us with a valuable insight into the progress of individual pupils. Inspired by our workshops, teachers would often use these forms to share their plans for further activities across the curriculum.

A total of 160 children performed in the opera and a further 200 collaborated with the designer, Michael Pavelka, to develop the set and costumes. We sought to make A King’s Ransom feel like a whole school project by running assemblies at significant stages of the project and providing free tickets to our dress rehearsal. A story book of the opera by the librettist Andrew Hawes enabled children to get to know the plot, with schools building it into their literacy programmes. One school initiated an art week inspired by the opera, resulting in an open exhibition in Norwich.

Our evaluation of the project was thorough, and the children’s increased confidence and self-belief was abundantly clear. One parent wrote: “My son absolutely adored his experience of opera. He went from having very little interest in the performing arts to a child who is always singing around the house and proudly mentioning to anyone who will listen that he's been ‘in an opera’. For a child who sometimes struggles with issues of focus and self-esteem, this has been an amazing leap forward for him.”

The social impact of working as a company was another success, along with the children’s growing appreciation of the value of perseverance and commitment. There was a real sense of pride in what they had accomplished - above all, the pupils were proud of themselves. The schools were pleased to offer such a rich music curriculum. And the children saw for themselves the benefits of trying something new.

One headteacher said: “At the start of the project nearly all the children said they didn’t like singing and most hadn’t heard of opera. Now, we can’t stop them singing and performing and they do it all with smiles on their faces. This residency has opened up their world to another dimension and inspired them to perform to the highest standard. This project has brought the whole school community together in a celebration of the arts and provided us all with a renewed vigour to pursue the impossible and dream big for our children.”

Following the project’s conclusion in February, I submitted written evidence about its positive social impact to parliament. The four schools will come together again this month to perform highlights from the opera in a celebration concert for the Young Norfolk Arts Festival. One of our original funders has provided further support for the creation of the Into Opera Youth Company, offering these children the chance to continue their exploration of opera with us.

The arts are being squeezed out of schools, yet our evidence is clear that they can help develop a child’s confidence, creativity, work ethic and communication skills. These are qualities that help drive the high standards of academic attainment and progress which teachers are under pressure to achieve.

Collaborations between schools and artists can have a significant impact, and I believe there is a need for artists and creative thinkers to develop projects that will support schools. Having seen the results of this project, I want to ensure that more schools have access to what proved to be a positive, transformative experience.

Genevieve Raghu is Artistic Director and Founder of Into Opera.
https://into-opera.org.uk
Tw: @into_opera