Losing NPO funding was devastating for Dance Manchester, but it has liberated the company to pursue its own path driving placemaking through outdoor work, says Deb Ashby. 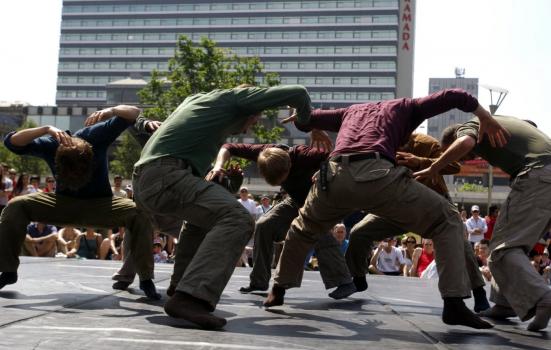 However, funding changes over the past six years have disrupted that vision and trajectory and in 2014 a cut in National Portfolio Organisation (NPO) funding and a restriction to the remit of that funding limited our work to community and youth development only, putting the festival and artist development work on long-term pause. The subsequent loss of NPO funding announced in 2017, though devastating at first, has liberated us to pursue our own path.

The future may remain insecure, but it allows excitement to build as we return to our vision to develop home-grown artists and audiences through a dance for placemaking approach.

We believe there is much to be gained for artists and companies by making work for the outdoors and unusual spaces. Dance companies typically generate and tour a new performance work every year or 18 months. In contrast, outdoor work has a longevity that provides greater potential for return on investment, increases exposure and reach to audiences and genuinely beds in new work.

For example, Compagnie Beau Geste’s Transports Exceptionnels was created in 2005, then performed at Dance Umbrella in 2007 and at our own Urban Moves in 2010. In 2012 I saw the work again in Italy and it’s still listed on the company’s website over ten years later. The spectacle associated with a duet between man and digger may explain the ongoing demand.

That is not the only example of a longer shelf-life for outdoor work. We co-commissioned Company Chameleon’s outdoor work Push in 2012 and it remains part of its touring repertoire six years later.

To gain that elusive booking on the venue touring circuit, choreographers often feel obliged to develop an hour-long programme of work to provide value for money and an evening out for audiences. Sometimes this means that an idea has been stretched and diluted by the need to fill programme time, damaging the artists’ reputation. In contrast, shorter works of 20 to 30 minutes are commonly programmed in the outdoor sector, enabling an artist to be succinct, to create and communicate without hesitation, repetition or deviation.

Additionally, without a venue, there are no box-office splits, which lowers the risk to artists’ fees (and increases the likelihood of being paid).

Across the country, showcases and platforms of short contemporary works by artists are often attended by dedicated but frequently sparse audiences, made up of family and friends. Feedback is sought but is tempered with love when arising from personal loyalty.

In public spaces, feedback is inherent. If an audience member stays to watch, you have their attention. Their staying power is not dictated by family loyalty but by their interest in your work. Get this right and this could become your audience, and as attendance is often in hundreds and thousands and not tens, you have a greater audience base to draw on.

Take Hofesh Shechter, a company founded in 2008, whose work Uprising was presented outdoors at both Greenwich & Docklands Festival and at our own Urban Moves. On a sunny July day in Manchester, it was performed in a packed-out Piccadilly Gardens to an audience who were all given flyers for a performance at The Lowry later in the year. That performance at The Lowry sold out. Only informal anecdotal evidence links these two events rather than audience tracking, but it confirms that more than one person became a Hofesh fan that day.

The advantages of taking work into non-theatrical spaces only pay off if the performance is itself of high quality. The outdoors is not a testing ground for under-developed work, as your audiences can walk away and not return. Retaining your authenticity, choreographic style and content is vital, whether in theatres, galleries, libraries or outdoors.

If you seek to build your audience base and reputation with an outdoor work, ensure that the work you make for theatre conveys the same distinctive voice. Performing in a public space demands some sensitivity that you are sharing the public’s space with people whose lives, experiences and sensibilities you do not know. But this is a matter of respect for your audience and not a signal to patronise them and water down content.

So now we seek to provide the circumstances for some of our regional artists to exploit the advantages of these alternative markets. With commissioning funds, in-kind space, mentoring from industry professional Luca Silvestrini of Protein Dance, and opportunities to go and see outdoor work, the scene has been set.

We are relaunching our placemaking approach by commissioning Getting from A to B, a work for libraries by Hawk Dance Theatre, and an outdoor version of Awakening by hip-hop artist Chad Taylor, as part of Refract Festival at Waterside Arts in Sale, Manchester.

Dancing in the streets
Dancing with the stars

Low barriers to access key to support for outdoor arts