Bidding for funding in partnership

When the six counties in the north of Wales suddenly found themselves in competition with one another for funding, they decided to form a regional partnership and work together. Gwenno Eleri Jones tells the story. 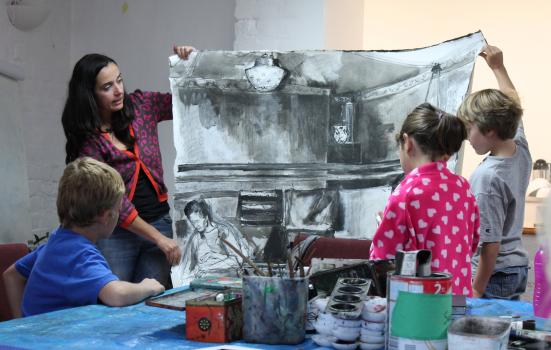 I joined Flintshire County Council in 2007 in the heady days of healthy budgets and a myriad of arts funding grants. Since then local authority creative teams have shrunk to a part-time post or nothing at all, many arts organisations have ceased to exist and too many venues have closed.

As is natural for creative thinkers, rather than scurry away to work even harder on our own we decided to come together as a region

Through all of this here in north Wales we have been successful so far in retaining arts services of various shapes and sizes in all six counties. This is in no small part due to the hard work and dedication of the region’s arts professionals, the value our respective authorities have put on creative engagement, and our collaboration on partnership projects.

The Arts Council of Wales (ACW) used to host meetings for local authority arts officers. They were an invaluable opportunity for us to come together for updates and discuss exciting projects we were planning. We would all be busy in our individual counties applying for funding and devising new opportunities, confident in the knowledge that if our ideas were good enough the money would come our way.

Then it happened – ACW changed its funding guidelines and we were all in competition with each other. There wasn’t enough money for everything and at the same time our budgets and posts were being cut. Things were looking dire.

As is natural for creative thinkers, rather than scurry away to work even harder on our own, we decided to come together as a region and see how we could deliver things differently. That’s how the North Wales Regional Arts Partnership was born. We looked at the skills and knowledge around the table and knew that we could use our expertise to provide some really exciting projects. After all, we were already doing it in our own counties, so why couldn’t we do it better together?

Our first pan-north-Wales project was Criw Celf, translated as ‘Art Crew’ but only known by the Welsh title. It originated in Gwynedd in 2007, Conwy County became partners in 2010 and by 2011 Anglesey, Denbighshire, Flintshire and Wrexham counties were also on board and we submitted our first funding application to ACW, which was successful.

Criw Celf started out as a visual and applied arts project for more able and talented school pupils from years 5 and 6, but it has now become a developmental pathway for secondary art education for GCSE pupils and AS and A Level students delivered by venues across the region. Now ACW is promoting the initiative across most of the country, and it even has its own funding pot.

The second major pan-north-Wales project is the North Wales Arts and Education Network, known as EDAU. In 2015 ACW announced its intention to fund an arts and education network in each of the country’s four regions as part of Creative Learning through the Arts: an Action Plan for Wales. We could see that as local authority officers we might be best placed to bring the arts and education sectors together.

This project would be a challenge in many ways as the application timescale was tight and we needed to consult with teachers, education advisors, arts organisations, cultural venues and artists from across the region. We had two months to come up with a new network format that would work for everyone.

We succeeded and EDAU is now in its second year. Although it took us a while to find our feet, we are now reaping the rewards and the network seems to be having an impact on the teaching of arts in our schools. We still have some way to go before it fulfills all of its intentions but ACW has committed to a five-year funding package, so we have another three years to ensure we’ve created a sustainable and invaluable art and education network.

Although the benefits far outweigh the challenges, there are some things to consider when creating new partnerships across such a large and diverse geographical area.

Each county has its own character and considerations. Some have large pockets of population and others have dispersed residents across rural terrain, while some have a mixture of both. We also have areas of poverty in each county so it is vital to reduce the barriers to participation, which we do by using our local knowledge.

To ensure we are able to successfully work together and reach a consensus on which projects to deliver, it is very important to give everyone an opportunity to contribute, to listen respectfully to all opinions and to step back from an idea if someone else’s suggestion seems to be more favoured by the group.

We create a safe place for creative discussion and sometimes there is heated debate. Mutual respect and an appreciation of the differences in the way we work have been key to the partnership succeeding. Working in partnership has enabled Flintshire County Council to deliver more projects with fewer staff and money, alongside the huge range of activity we provide as a county already.

How have the arts been affected by recent changes in local government, and how can they be steered towards a thriving future? Have your say in ArtsProfessional’s short Pulse survey.

Bidding for funding in partnership