Red Ladder’s #GisATenner campaign appealed to the company’s Twitter followers to donate as little as £10 to help save the company following funding cuts. Chris Lloyd reveals what happened next. 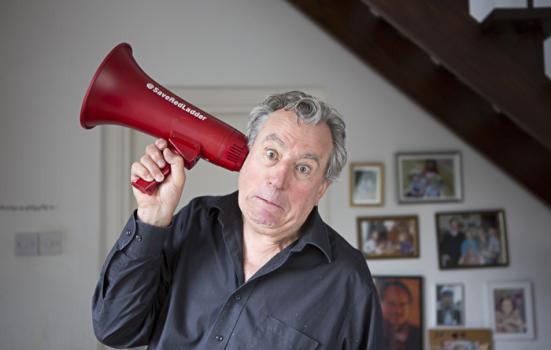 Following the announcement in July 2014 that Red Ladder was to receive a 100% cut to its core Arts Council England (ACE) funding, two independent supporters, Jane Verity and Oli Bentley, set up a campaign to save the company and Save Red Ladder was born.

Red Ladder champions new writing, particularly that which challenges or agitates. With 48 years of history, we are acknowledged as a leading national touring company contributing to social change and global justice.

The #GisATenner campaign was based on the idea that if each of our Twitter followers gave £10 that would cover the full production budget of one UK tour (£80,000), and half of the £160,000 annual core grant that was being withdrawn.

The campaign raised nearly £4,000 in the first week, and by the end of July had raised £10,000, including a £5,000 donation in the first month from North East Labour MEP Judith Kirton-Darling.

A number of other donation-based activities were implemented. For instance, Save Red Ladder worked with the online fundraising platform Local Giving, which had just launched its annual match-funding initiative Grow Your Tenner. All donations made through the platofrm worth up to £10 would be match-funded, equating to up to £20 for Red Ladder.

We had also been looking at ways to collaborate with writer David Peace, and in August 2014 I was taken aback when he offered to donate the stage rights from his novel The Damned United to the campaign - or rather we bought them from Faber & Faber for £3.68, to represent the 368 pages in the book.

The resulting co-production with West Yorkshire Playhouse, 18 months later, was an enormous box-office hit when it played in Leeds earlier this year and then toured to Derby Theatre, with David himself flying in from Japan to host a Q & A during the Leeds run.

In August last year the Save Red Ladder Campaign was awarded a PR Superstar award from Local Giving as part of its Grow Your Tenner awards. The campaign was also nominated for the Emcees Arts and Culture Awards by the National Arts Fundraising School, in the Brown Creative Award for Best Campaign Under £100k category.

The key to success has been the independent supporters and organisations that have given their time and support, and advocated for the company rather than us banging the drum in isolation. This has had a profound impact. While the £33,000 raised to date hasn’t in itself filled the gap in funding, it has levered significant additional monies through unrestricted match-funding.

It has also told its own story to venues, funders, participants, creative artists and audiences alike. For example, the financial support pledged was a key factor in achieving a successful Grants for the Arts application from ACE for The Damned United.

The next phase is to articulate our artistic plans for the coming three years and talk with supporters and donors to encourage them to be part of this stage in the company’s development. We have been saved, albeit in the short term, so we are extremely grateful to be able to avert our gaze from our boots to the horizon, which I have to say looks very bright.