Creating accidental audiences, be it on beaches, in shopping centres or at bus stops, is increasing the number of people who feel comfortable with contemporary dance, believes Sophie Inkster. 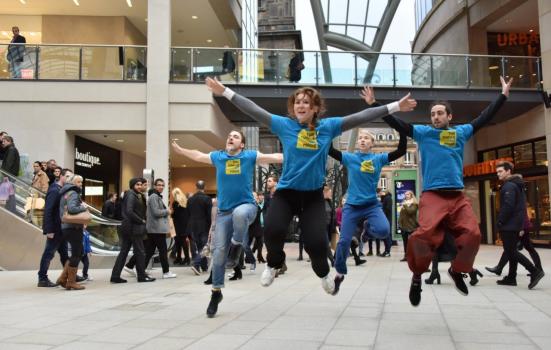 A Dance WE Made performance in Trinity Leeds shopping centre
Photo:

Yorkshire Dance, the county’s dance agency, is no stranger to accidental audiences, or the magic which brings people together and opens up the world of contemporary dance to those who would not normally have bought a ticket or stepped inside a dance venue. Even since 2012, we have welcomed unsuspecting onlookers to many of our events, including a bemused Coronation Street cast member among hundreds of onlookers on Bridlington promenade for Bodies on the Beach, street drinkers and the police in Bradford’s Centenary Square for Yorkshire’s 2,012, and the hundreds of shoppers who happened to pass through Millennium Square, one of the busiest areas in Leeds during Big Dance – Celebration.

The location of the pop-up performance remained a secret until the performance itself, meaning the audience remained blissfully unaware until it ‘popped-up’ all around them

One of the region’s biggest accidental audience events was for OverWorlds and UnderWorlds, Yorkshire’s Artists Taking the Lead commission for the Cultural Olympiad. Eight cultural organisations from Leeds, including Yorkshire Dance, took over public spaces in central Leeds (the glamorous Victoria Arcade and the not-so-glamorous Dark Arches, which carry the River Aire under the city) for a long weekend. Of those who witnessed the event (an estimated 20,000), only 56% had actually planned to do so. We have also supported a range of site-specific and outdoor performances, including Terrarium, performed in a giant inflatable bubble across North Yorkshire Moors national park, and a dance performed at a busy Bradford bus stop.

Most recently, over a weekend in early February, we teamed up with Casson and Friends and took residence in Trinity Leeds shopping centre to present The Dance WE Made. The project, in which unsuspecting shoppers became the choreographers, was run by Tim Casson with the help of three local dance artists. The group chatted with shoppers and turned their stories into movement. The performance then took place in the hub of the busy shopping centre for hundreds of passing shoppers to see. The conversations, rehearsals (which also took place in the middle of the public space) and final performance were filmed to create a six-minute film. In the film, we see shoppers standing around watching and engaging with what was going on – even those not directly participating by sharing stories, were suddenly an audience, and also influenced the creation of the work.

Following February’s success, we returned with Tim Casson to Trinity Leeds in June for a pop-up performance. We had put out a call for different types of people to take part, from dance students to self-confessed non-dancers of all ages. This created five different groups of people who rehearsed with professional dance artists, ready to surprise shoppers in Trinity Leeds in early June. Some of those recruited for the pop-up performance had shared their stories back in February, meaning the unsuspecting choreographers had become the dancers. The location of the pop-up performance remained a secret until the performance itself, meaning the audience remained blissfully unaware until it ‘popped-up’ all around them.

All of this has informed our newest project, Amplified, which will present small-scale outdoor contemporary dance work to audiences across the north of England next year in festival and venue contexts. Project producer Natalie Duffield-Moore is hoping to build a network of festivals in the north by introducing new pieces of outdoor contemporary dance work. At the moment, dance has little or no presence at festivals, which have loyal core audiences who return year after year. By introducing dance performances where festival-goers can stumble across them unexpectedly over a number of years we’re hoping to make that audience increasingly comfortable with watching a variety of contemporary dance, and without having to cajole them into buying tickets for shows in venues with which they’re unfamiliar.

We like to look around at other people’s ideas too. One we like very much is Story Sofas, to be presented by fairandfunky at Holmfirth Festival this summer, which invites the passing public to engage with it by placing sofas (and performers) at various sites across the landscape so that the work is embedded in a public environment. Work this intimate shown in open, outdoor spaces, such as bustling town centres, makes a real impact. It’s striking and unforgettable. Anyone could quite literally trip over it.

The concept of accidental audience is a fascinating one as it opens people up to the world of dance that they were not expecting. It makes the projects far more exciting than if the only people involved were the intended audience. We hope to continue putting on work which has the potential to invite accidental audiences and continue to keep the unsuspecting involved.

Watch Tim Casson’s video for The Dance WE made.