Heading towards the EBacc

Arts professionals may be unanimous about the value of the arts in the curriculum, but what do schools think? Christy Romer spoke to four headteachers who gave a range of verdicts on controversial proposals to introduce a compulsory suite of qualifications for GCSE students that excludes arts subjects. 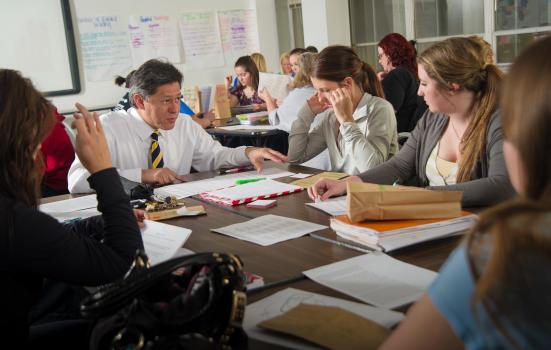 A snap survey of leading figures in education is unlikely to throw up a passionate distaste for the arts. They are “an inherently good thing” says Rob Campbell, Principal at Impington Village College in Cambridge; they “make us what we are”, according to Terry Fish, Headteacher of Twynham School; Michael Fordham, Assistant Headteacher at West London Free School, said that it would be “a real tragedy if schools were to lose their arts provision”; and Tom Sherrington, Headteacher of Highbury Grove School – perhaps better known by his twitter handle @headguruteacher  – noted that prioritising arts education sends a “strong message about what we want in society”. Yet this clear convergence of opinion about the worth of the arts does not mean a clear convergence of opinion about the worth of a compulsory English Baccalaureate (EBacc), a Conservative education policy denounced in the arts sector for ‘sidelining the arts’.

The EBacc has been consistently skewered by culture and education professionals for having overbearing requirements that force schools to divert limited resources away from other subjects – particularly the arts. The general consensus among the outspoken, twitter-savvy generation of Heads is that it may be possible to provide the option for every student to take a language and history or geography at GCSE, and most schools may already be offering as much, but ensuring that all students study these subjects would be an almost unworkable challenge.

Rob Campbell told me that the “well documented shortage of language teachers out there” would make a 100% take-up of a foreign language incredibly difficult. Of his current GCSE students, he said, 44% could be said to have taken GCSEs that fulfil EBacc requirements, and a further 10–15% could be counted as “having been involved” in the programme. But that still leaves a significant minority of students out in the educational cold, and ‘fixing’ this issue would place the school under immense pressure. Terry Fish grabbed this line of thinking and pointed to the difficulties presented by an increasingly intensive maths curriculum and the new double-weighting of English in school-to-school comparisons as additional factors that would – as a matter of necessity – squeeze any non-EBacc subjects out of resources and curriculum time. Fish emphasised his worries about an arts education without substantial curriculum commitments: “the arts will be reserved for the privileged if the EBacc becomes the norm. School should be about offering experiences to all, no matter what a student’s background. If schools are unable to offer arts within the curriculum, then it falls on parents to provide opportunities for their kids.”

But not all of the teachers were quite so concerned by the proposals. Michael Fordham recognised the risk to the arts, but ultimately sees the EBacc as a step in the right direction – albeit a “flawed” one. Much like the other teachers, Fordham agreed that the focus on League tables and comparative results led some schools to try and ‘game the system’ by encouraging students to take vocational courses instead of core academic subjects, and that this has left many children the victims of a narrow education. He therefore views the EBacc as a tool to restore a rigour to the curriculum and to begin to overturn any inherent willingness to take easy options. This seemed to outweigh his concerns for the arts: “I’d much rather the arts were compulsory until 16, but the EBacc takes up – at most – three-quarters of the timetable. There are still slots in which music or drama is still very much possible.”

However, only having a quarter of the curriculum to play around with is a clear issue for Terry Fish. He opposes the overly prescriptive nature of the EBacc, which operates on the basis of a “one size fits all policy and ignores nuance between individuals”. At his school, not every child is forced to study a language – some children with low reading ages are given the opportunity to develop at their own pace, and focus on English first. Fish recounted having a number of very able students asking to study two or three arts subjects at GCSE, which the school was able to accommodate. The implication, sadly, is that this level of flexibility would be eradicated under the weight of the incoming GCSE changes. “The EBacc is right for a lot of students. But it’s not right for all.”

Equally, the idea that introducing a compulsory EBacc policy is the only way to inject ‘rigour’ into a curriculum is hotly contested. Campbell said that “it’s not really possible to say that some subjects are more rigorous than others. Some kids excel at computer stuff, whereas more confident children may be better suited to drama.” Tom Sherrington used his own child as an example to drive home his issue with the concept of ‘rigour’. “My son is currently deciding which GCSEs to take, and it’s a real challenge for him to think about doing an arts subject. Simply doing English, Maths, History and French would be easy, but doing drama or music or art too is really going to stretch him. Being stretched at that age is a very good thing.

“But on top of that, I don’t think a government minister has the power to say that one subject is more rigorous than another. It would be a total farce if our school was outstanding in every aspect but brought down to a “good” rating because a couple of kids took Sociology at GCSE instead of Geography.”

Given the weight of concerns about the EBacc under contention, the question on every teacher’s lips is whether the measure will actually be introduced. Again, the Heads were somewhat divided. Fordham was unconvinced by arguments that the sector would face insurmountable logistical challenges: “Some schools would struggle to find language teachers, but I think this would be a short-term problem that would sort itself out.” But Fish disagrees. “I don’t think this will work across the country,” he said, and Tom Sherrington echoes this view: “I think the EBacc will fall apart. In some places it will be pulled down by the inability to find Modern Foreign Language teachers. And in others this ridiculous idea about a school being downgraded for failing to include specific subjects will bring it down too.”

It remains to be seen whether the controversial measure will be implemented in full or in part – all that is certain is that for the next generation of children, whose education will be affected, the stakes are most definitely high.