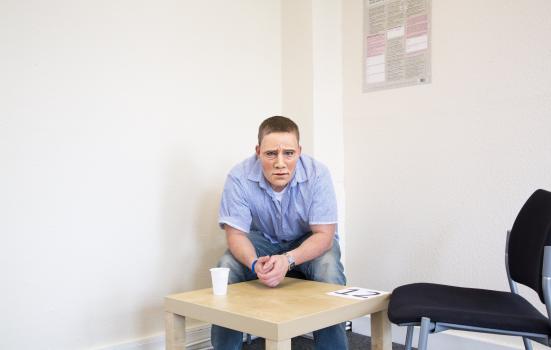 Geese Theatre Company is a team of professional theatre practitioners that has been working throughout the UK criminal justice system since 1987. The company, a registered charity, delivers performances, residencies and drama-based group work in custodial and community settings, with men and women who have committed offences. We also provide interactive conference performances and training inputs for criminal justice professionals and other social welfare agencies.

We believe that theatre and drama can be powerful and effective tools for individuals to examine their own behaviour and can act as catalysts for personal development and change. Independent, academic research, which can be found at the Arts Alliance evidence library, has provided validation that our work has a positive impact on attitudinal and behavioural change.

We are aware that there may be many external influences on an individual’s motivation to offend, including socio-economic factors, but as these factors may be outside an individual’s control, we focus on areas where there is greater potential for personal agency. Our emphasis in working with offenders is around their behaviour, its impact and the internal processes (thoughts, feelings and beliefs) which drive that behaviour. This is set within a motivational context which highlights personal goals, qualities and achievements, and encourages engagement with the ‘whole person’ rather than the ‘offender’.

Understanding the motivation to offend is central to the process of change. Some individuals experience embarrassment, shame and anxiety when asked to explore their own behaviour. Clearly, we need structures that explore offending in a relevant and useful way but which avoid group members’ anxiety becoming overwhelming and them ‘shutting down’.

Working at one step removed through fictional characters can alleviate this problem to a great extent. In a ‘facilitator-enacted scene’, a practitioner performs a simple mimed scene. For example, in a sex-offender group work setting they may see a man sitting alone, apparently bored or depressed, who then performs a number of actions, such as turning on a computer, drinking and looking out the window. His mood will appear to change as he watches the computer screen and mimes using the keyboard. He appears to become focused and excited. He will then leave the room after locking the door. The scene is then replayed and frozen at various points. The group is asked to explore what might be happening, what the character might be thinking and feeling and what links there might be between his internal world and his offending. The scene is merely a skeleton and the group takes ownership of the character by providing detail which will tend to mirror their own thoughts, feelings and experiences without, at this stage, having to own them. Participants can test out responses to sharing more difficult material as well as hearing others articulating feelings or motivations which are similar to their own. This can have a powerful impact in alleviating some of the debilitating effects of shame or anxiety, creating a bridge into personal work for those who are ready for it, and a vehicle for exploring offending with those who are not.

One of the concepts which permeates much of our work is the notion of mask as metaphor, the ‘front’ or coping strategy we use to protect ourselves or to portray ourselves in a way which suits our purpose. We can explore this concept as part of a facilitator-enacted scene with the practitioner performing in a ‘half-mask’. In a scene designed for anger management groups, a man walks into a pub and looks around in what appears to be a confident and assured manner. Later in the scene, he reacts violently to other characters jumping the queue on the pool table. The scene is repeated and from the beginning, participants comment on the contrast between his mask of nonchalance and entitlement, and the potential fear, anticipation and hyper-vigilance which he, and probably they, may experience under that mask.

After the scene has been replayed and the story created, the group is invited to question the character (the practitioner in role). He responds with his mask in place, “I only had a go at them because they were shouting and swearing in front of some ladies.” He may then lift his mask and articulate some of the feelings which lie beneath, “I felt embarrassed and disrespected when they ignored me.” By doing so, he is articulating some of the vulnerable and powerless feelings which participants may find difficult to voice themselves, even at one step removed.

This process allows the group to explore a critical internal process, that of converting vulnerability to anger and aggression as a way to feel in control. Once we have an understanding of the function of violence, or other offending behaviour, and the internal processes which inform it, we are better placed to explore ways to change those processes and behaviours. Clearly, role play is an ideal vehicle for individuals to then try out and practise new behaviours as a form of rehearsal for life.