A drama project has brought research on dementia to life for healthcare professionals as well as directly benefiting people with the condition. Cathy Bailey explains how. 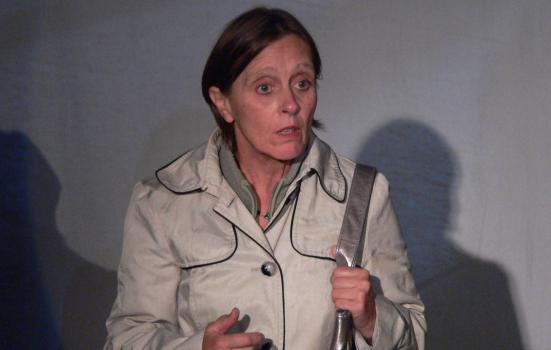 Jack and Jill and the Red Post-Box

My colleagues and I at Northumbria University and the University of Edinburgh have been working on a research project that explores everyday tensions between the notions of risk and resilience for some people living with dementia in the north east of England. Often, it is everyday activities such as going to the hairdresser or the post office that can present considerable challenges for people living with the condition. Such challenges may be as much to do with how others communicate and engage with someone with dementia, as it is about the person themselves.

We felt that the issues raised through the research deserved a life beyond a written report. We worked closely with Skimstone Arts, based in Newcastle, and its Artistic Director, Claire Webster Saaremets, to explore how drama might allow us to have a greater and more positive impact on how we deal with dementia, a condition that affects some 800,000 people in the UK. ‘Jack and Jill and the Red Post-Box’ tells the story of a family whose life has been turned upside down by the condition. It explores the different scenarios that they may find themselves in on a daily basis and allows the audience to see the impact of communicating with someone living with dementia, the difficulties that they may encounter and the consequences of certain interactions. Not only does the play bring issues to life for family, friends and other members of the community, but it also serves as an effective training tool for healthcare professionals.

With this in mind, we are currently preparing to present our experiences of using drama to promote and improve the exchange and utilisation of knowledge at an international conference in the Netherlands. Using drama to communicate our research has also played a role in our recent shortlist in the Nursing Times Awards for our partnership with the Alzheimer’s Society, with performance being recognised as an effective tool to educate and engage people on the issues relating to dementia.

We are also collaborating with other cultural partners, such as Live Theatre in Newcastle ‎ (which worked with writer Fiona Evans to create a series of short films entitled ‘The Dementia Monologues’, following her stage production of Geordie Sinatra which tackled the same themes), to join their panels and audience discussions about dementia. There is clearly an appreciation of drama – be it on stage or screen – and how it can benefit people affected by dementia.

Everything that we are doing is contributing to our aim to become a dementia-friendly community, and I can see the arts playing an increasingly important role in dementia awareness. Drama has made our research accessible to a much wider audience, taking our academic theory and translating it into very real, everyday situations. The case study below is an example of how this is happening.

Our third year module, Professional Directions, allows us to create our own projects and take them into the community to benefit those we work with, build on our experiences and share our findings with fellow students.

Using previous experience of working with people living with dementia, and having seen ‘Jack and Jill and the Red Post-Box’, I created a project working with people with dementia at Cranlea Care Home in Newcastle in January. Working alongside another third year student, we helped residents create reminiscence boxes using photos and written and recorded memories, and delivered arts and crafts sessions. We themed the memories session around love, marriage and courtship as it was close to Valentine’s Day. From this, a theme of dance halls emerged. By introducing old coins and a shoe, one participant recalled the times when she wore her dancing shoes when she went out courting. As she reminisced about attending the dance hall and paying the person on the door, it sparked other people’s memories about their own dancing days. Through improvisation techniques, we brought the dance-hall theme to life. It resulted in everybody dancing in their chairs together, adding a real sense of enjoyment and reflection.

Feedback after the sessions suggested that residents who were usually withdrawn became more engaged through our activities. Residents who often had trouble remembering things were able to recall the activities that they did with us and were therefore more open to trying another session with us. Discovering the power that drama can have on people living with a condition like dementia has opened my eyes to the wider impact and potential on offer through creative arts.

Dr Cathy Bailey is a Senior Research Fellow in the faculty of Health and Life Sciences at Northumbria University.
www.northumbria.ac.uk/hces