The music, dance and wellbeing mix

Many participants in the Old Vic’s community projects now lead healthier and more active lifestyles, according to Alexander Ferris and his team. 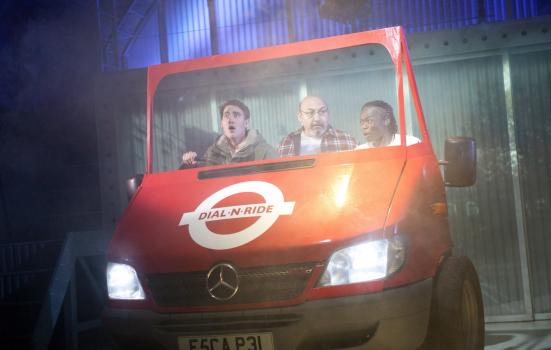 A scene from Epidemic
Photo:

Old Vic New Voices community projects have been reaching out to Londoners of all ages and backgrounds for the last ten years, and every project provides its fair share of surprises. During an evaluation a few years ago we were interviewing Judith, a 76-year-old retired social worker and first-time performer. She had just performed in one of our large-scale community productions, a promenade performance exploring what it meant to be a Londoner in 2010. Judith was a valued member of the 120-strong company but what surprised us was how taking part in the production had positively affected her health. She told us that she suffered from a great deal of pain due to rheumatoid arthritis before the project began but whenever she took part in rehearsals, workshops or performances her pain evaporated. This knocked us for six. We knew from experience that theatre projects could increase confidence and community cohesion, but this was the first time we had considered the tangible health benefits of participating in our projects.

Our follow-up project, Epidemic, put health and wellbeing at its centre. We wanted to create a musical exploring public health. It went on to win a Royal Society of Public Health Arts and Health Award. With that broad platform we opened the debate up to our local community to reflect their concerns. The two recurring issues were obesity and mental health. Our research also led us to discover New Economic Foundation’s (NEF) Five Ways to Wellbeing: Connect, Be Active, Take Notice, Keep Learning and Give.

So, we began creating a musical that explored these themes, while remaining artistically satisfying and challenging for audiences and participants. With a few tweaks to our existing model, we also embedded NEF’s five ways into the process. We always begin rehearsals with an active, physical warm-up, but this time we consulted personal trainers to ensure the greatest fitness benefit for the participants. We invited a nutritionist into rehearsals to advise on energy-giving foods and snacks that support the immune system, to help the company through the intensive production period. Recipe handouts and independent nutrition surgeries at lunchtime were made available for free. Relevant news reports about the two main health issues covered rehearsal room walls. The narrative of the piece encouraged individuals to share their personal experiences of mental illness which they reported improved their mood. Volunteer producers regularly posted articles and information on social media outlets and arranged interactive front-of-house displays that asked the audience to consider the issues before the show even began. Our programme included tips from the Mental Health Foundation and healthy eating advice. The key was making small changes to what we do routinely to maximise improvements to participant wellbeing.

When we evaluated the process, we looked closely at the impact on wellbeing. 87% reported an increase in their general wellbeing. Anecdotally this included individuals losing weight, giving up smoking, seeking professional talking therapies, expanding their social networks and leading more active lifestyles.

For our next project, a three-year commitment to build a community company based at the Old Vic, we intend to identify exactly which elements of our projects contribute to improved wellbeing; is it the staff, the space, the speed, the subjects? We are also working closely with key partners, such as the Well London programme, to develop the evidence base for health impacts in the arts and to make sure that we target those with the most to gain through participation. The Well London programme uses a community-led approach to improving health and wellbeing in some of the city’s most disadvantaged areas. We share their vision to build and strengthen the foundations of good health by expanding skills and increasing confidence. Phase 1 of the programme ran from 2007 to 2011. The participatory arts strand, Be Creative Be Well, was led by Arts Council England which supported local artists to develop over 100 creative projects in 20 of London’s most deprived areas. Over 3,300 residents took part in activities that covered nearly every artform. Well London discovered that the most effective projects were shaped by local conditions and people, and involved high-quality artistic engagement.

Alongside projects like ours that focus on improving wellbeing, there are many excellent projects making great strides in dealing with acute medical problems. As the evidence base grows and more expertise filters through, best practice in arts and health can become common practice. When cuts are at their most vicious and the age-old argument of arts vs hospitals is trotted out, perhaps we can now begin to be a bit more robust in our defences. With key partnerships we can be more scientific about how we target our work. With a few simple enhancements, we can maximise and measure the health impact of our existing projects.

The evidence of both programmes proves that the arts have a role to play in the general health of the population. Participating in the arts is about new experiences and engaging in a process of change, finding pleasure in creativity, developing new skills and social networks, taking risks and gaining confidence. All these things really do promote good health.