Carolyn Black reflects on our use of language in recent papers and discussions at the No Boundaries conference on resilient practice. 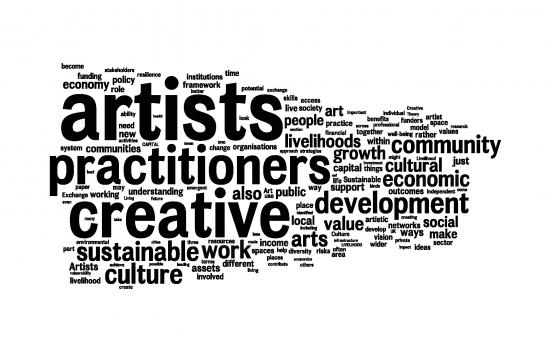 The arts sector has been referring to resilient practice for some time now. It is one of the key terms used when discussing how the arts can survive the impact of the recession. Initially, the phrase was particularly used in relation to economic resilience, as evidenced in this quote from Arts Council England’s ‘Making Adaptive Resilience Real’ (2010): “The Arts Council and other public and private investors in the arts should work together to map financial instruments and ensure a diversity of investment mechanisms exist that can meet the various investment needs of the arts sector in building resilient organisations.”

Might it be that the language used in early key documents about resilient practice gave us guidelines in theory, while more recent ones reflect the practice of that theory?

Thinking again about the title ‘Making Adaptive Resilience Real’, the word ‘real’ refers to putting resilient practice into action – taking it from theory to practice. Might it be that the language used in early key documents about resilient practice gave us guidelines in theory, while more recent ones reflect the practice of that theory? Texts have shifted in tone from being driven by economic logic to more emotional pleas relating to social value. For example, ‘The Art of Living Dangerously’, a recent provocation commissioned by Exchange about resilient practice, written by Mission Models Money (MMM)‎ and the New Economics Foundation shows how emotional words are now more common when referring to what we need in terms of resilient practice: “A whole-hearted, whole-system embrace of the full range of things that culture can do − not just instrumental, not just intrinsic, not just aesthetic, not just social, not just tourism and entertainment, not just ‘great’, not just artists, not just audiences, but − arts and culture for all of our sake.”

It would seem that the language used to discuss resilient practice in the arts is adapting. ‘Resilience’ is a powerful word, implying being steadfast, grounded, stable, holding one’s place in the world. But the ground below has been steadily crumbling and we appear to have climbed on to a raft of business euphemisms to mask our economic fragility. Other words have joined the lexicon of resilient practice: holistic, ecology, whole-hearted. Economic resilience is still an imperative, but recently how we might achieve it, and the language we use to do so, reflects the very nature of the arts sector. It is more creative. We are increasingly using poetic language to communicate our strengths, alongside adopting business terminology that demonstrates we understand economics. If the recent No Boundaries conference is anything to go by, it is beginning to work.

No Boundaries took place simultaneously in both York and Bristol, and live online, on 25 & 26 February. Many emotional words were used to inspire and delight the audiences, both in the rooms and online. The atmosphere throbbed with them. A few snippets were “We need empathy maps”, “Collaboration is a muscle – the more you use it the better it gets”, “Art is for the human spirit – everything else is subservient” and “The empathetic citizen”.

The event was not only geographically split between two sites, #nb2014 was also trending on Twitter, which echoed the provocations and comments in the rooms. My favourite Tweet comes from Dannii Baillie (@NotMinogue): "Excellent point from the room- Let's reframe the debate and use linguistics more creatively to win the Arts/value argument #nb2014".

I agree with her sentiment wholeheartedly. ‘The Art of Living Dangerously’, as well as referring to wholeheartedness and holistic practices, concludes with a series of questions rather than recommendations. The first asks: “How can everyone working with arts and culture develop a more holistic view of the impacts of arts and culture, exploring the diversity of values and views so that people benefit from the full spectrum of impacts arts and culture can have, leading to improved quality of life for individuals and communities?” This may be sailing a bit too close to instrumentalism for some, but at least it has its heart in the right place. Overall, the authors appear to have moved away from the assumption that it is arts organisations that need to become resilient, getting closer to the idea of holistic systems and bodies. This reminds me of a much earlier paper, ‘Invitation to an Alternative Future’, by Clare Cooper and Roanne Dods, at that time Co-Directors of MMM: “Look too at your organisation or at the human setting in which you are working. This too is a human system, a human being. Is it in good shape? Take its pulse – from the head, the heart and the spirit.”

Most recently in ‘Towards Plan B: a different approach to public funding the arts’ by Three Johns and Shelagh, the authors also propose that we need to look at the arts as a system and suggest we need to be “brave and imaginative enough to put our house in order”. They refer to economic reductionism and remind us “there are things in our lives that should not be monetised”. The language they use is about human beings, not economic systems.

They also suggest that we are not winning the public over, that the press still ridicules contemporary art and the government does not seem to quite understand it. I wonder if this is because we have not been using the right language. We need to revisit the importance of how we discuss arts, particularly with those less familiar with our jargon. Imagination is our currency. Could it be that the more the recession pushes us to focus on economy, the more poetic we are becoming? It would appear so. In the Arts Council England’s draft copy of ‘The Wider Benefits of Art and Culture to Society’ the first highlighted paragraph is: “When we talk about the value of arts and culture, we should always start with the intrinsic – how arts and culture illuminate our inner lives and enrich our emotional world. This is what we cherish.”

Economy is important to the survival of the system, but is not the only reason for its existence. Emotions matter too. The art sector is a holistic system − organisations, artists and audiences are a part of it. You can’t have a holistic body without organs, there would be no pulse.

Many thanks to Carolyn Black for her observations on the shifting emphasis of resilience in the arts. As she states, the term suggests steadfastness and the capacity to withstand change and shocks. An aspect of this, I believe, suggests the need to be flexible, to review what has happened before to decide on what should happen now and in the future. Using the analogy of the body and a human persona emphasises the need to consider the whole, not just the individual parts. With this in mind, should we be considering not only what we do, but why we do it and the relevance of this currently and into the future? When a person is faced with severe change, this is often the catalyst to review what is important in their life with the opportunity to jettison what is no longer relevant. I suggest this 'in extremis' model is needed to power our discussion about the arts and their relevance to (and impact on) society. I believe this will enable us to engage in new dialogues with a wider sector than previously. Experience suggests this wider society may be more curious and interested than perhaps the arts sector had realised and that the problems in the arts are mirrored in all aspects of life. I suspect there are some novel and unexpected alliances to be made that may benefit all involved.