Kate Reynolds describes a multi-arts project for young people with autism spectrum disorder that has gone off the beaten track and now includes others without the condition. 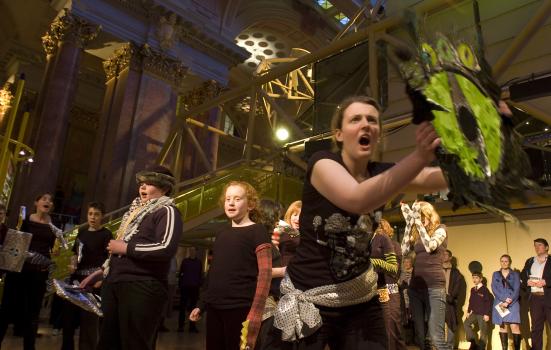 Since 2008, the Royal Exchange Theatre and Manchester Camerata have worked with children and young people with autism spectrum disorder (ASD) through their Songlines project. Now, as the project enters its fifth year, both organisations are working in yet more pioneering ways to break down barriers between groups of young people and dispel the social label that autism can bring.

ASD is a lifelong developmental disability affecting the lives of around 2.7 million people in the UK. It affects how a person communicates with and relates to other people and the world around them. Prior to the Songlines partnership becoming a reality, the performing arts were seen as a place where social skills could be developed among all age groups, genders and backgrounds. But it also had to be recognised that most existing activities were not necessarily devised to suit the needs of those living with ASD. There were few projects that provided the safe environment where participants could be supported to develop self-confidence and self-esteem, as well as the opportunity to gain skills in music, drama and performance.

Working in unchartered territory, the project leadership guided the two groups into working alongside each other for the first time

The understanding, enthusiasm, expertise and artistic background of the project leadership, as well as the freedom of the performance spaces both organisations offer, means that the project has had a transformative impact on the lives of participants and their families. Parents of those taking part have reported on the development of close relationships between their children and their peers. In the glow of its initial success, the project could have continued on a familiar path, but project leaders identified a brave new direction for Songlines and have taken themselves and their participants off the beaten track.

It is apparent that isolating children with ASD in specific projects has areas of success, but in consultation with families, individuals and supporting charities it is clear that more could be done to ensure mutual awareness, understanding and empathy between children and young people. The Songlines team decided that the next step was to merge young people with different learning needs, at once presenting the risk of upsetting the equilibrium of not one but two groups of children and young people, but also presenting the opportunity for a richer experience of mutual learning and development.

From last Autumn, two groups worked separately from each other – one made up of children with ASD and the other young people without ASD. They explored music, theatre and visual arts through weekly workshops, tailored to their needs, led by a team of composers, musicians and theatre practitioners. The groups worked in parallel, taking the same thematic starting points for their work and were aware of each other’s existence and work plan. Remotely, they were encouraged to communicate and create with each other through the sharing of their work and developing content for the next stage. In January the two groups came together.

Working in unchartered territory, the project leadership guided the two groups into working alongside each other for the first time, to develop and build upon the work generated in term one. However, as a result of their careful approach and thorough groundwork, the transition process into term two was smooth, with the two groups very quick to assimilate and establish a collaborative, company feel. The challenge of appropriately supporting all participants is being met and the creative, participant-led approach of the project is seeing the united group develop improved communication and interpersonal skills and, perhaps most importantly, build new friendships. The process is still underway, with the end-result being a piece of shared musical theatre for public performance in The Studio at the Royal Exchange Theatre this month, plus considerable learning and reflection opportunities for the project leaders and participants.

Before 2013 Songlines was funded on a project-by-project basis. However, the importance of this extended programme of work and clearly stated progression routes for participants provided a strong case for longer-term funding support. Following successful bids, both Children in Need  and Youth Music are supporting it as a sustainable development opportunity. There is a robust approach to evaluation, using a research model led by Dr John Habron of Coventry University, which will provide a body of evidence to demonstrate its impact. Both we at the Royal Exchange Theatre and Manchester Camerata look forward to sharing that with fellow practitioners in progressive arts participation and learning programmes.

Kate Reynolds is Participation and Learning Manager at the Royal Exchange Theatre.
www.royalexchange.co.uk