A performance on the run

Ben Taylor describes an arts event where performers ran through city centre streets, commanded by the general public while they watched online. 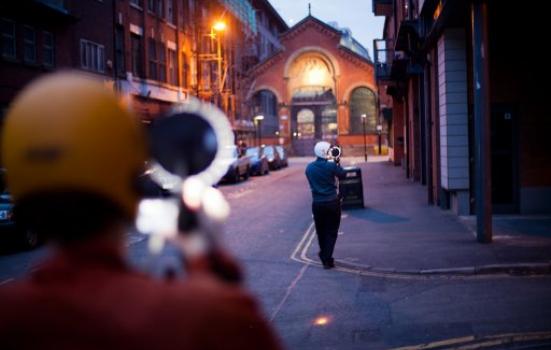 “Have you seen a guy looking like me dressed in yellow?” A romantic dinner on a balmy June night in Sheffield has just been interrupted by a man clad from helmet to toe in red carrying a device that could have been taken from a Ridley Scott movie. These diners have inadvertently got caught up in ‘I’d Hide You’, a pervasive game of stealth and cunning from innovative art group Blast Theory that blurs the lines between audience, observer, player and performer.

I’d Hide You is a game within a game: three performers in the real world are trying to film each other in the streets without getting filmed themselves. At the same time online spectators are communicating with the performers, telling them where to go (and occasionally instructing them to steal food from innocent spectators). The online audience also becomes players in their own right, clicking on their screens to photograph other performers, earn points to move up a virtual leader board.

Originally performed at Future Everything‎ in 2012, I’d Hide You had its second outing during Sheffield Doc/Fest‎ last year, as a vessel to explore and research the creation of work that spans both physical and online spaces using commercially available 4G technology. Organised by Sheffield Doc/Fest, EE, the mobile network operator, and Sheffield Hallam University and supported by the Digital R&D Fund for the Arts (a collaboration between Arts Council England, Arts and Humanities Research Council and Nesta), the aim was to create a roadmap for other arts organisations to create work that expands out of closed buildings into open physical spaces, and into digital spaces as well.

Performing outdoors among the public and employing sophisticated technology brought new concerns. Network access and reliable connectivity needed to be provided to the performers as they ran through the city centre, as well as to players participating from dedicated cafe-like pods, and to the controllers monitoring the whole event from a command centre. Several options were examined, from mobile wifi vans using satellite uplinks, to using the fast private network used by the nearby university. Each option had its own profile in terms of cost, reliability, regulatory compliance and user experience. Eventually, a solution that combined public 4G via EE's cellular network for both performers and local players, and a direct private connection for the command centre proved a successful solution.

It was also important to train performers to be aware of the places they were working in, including how best to use those spaces and how to interact with the audiences, spectators and public in the physical space, and the audience and players online. The game required performers to carry a considerable amount of technology, which needed to be managed and stored between games, checked and maintained, worn correctly and safely even while running and hiding. The performers also needed a separate channel of communication to the control room to discuss equipment and other issues in a way that did not interfere with the video stream or the online experience. Meanwhile controllers watched the live stream and maintained operational control over the performers, pointing out issues such as camera framing, movement in the public space, potential safety issues, and passing on input from the director.

The ‘director’ stood behind the controllers, looking at all three video feeds, following the communications on technical and practical issues, and encouraging the interaction and narratives developing in the game space. The researchers on the project considered this role to be absolutely key to making the overall performance cohesive and engaging.

Perhaps greater, though, than the technical and organisational challenges was the need to find a common language and understanding among so many different practitioners and specialists involved in the project. Much effort was spent visualising concepts in drawings and diagrams, developing a universal way of communicating so that everyone knew their roles, tasks and the implications of decisions. In addition to the range of professional terminologies, the boundary-crossing nature of the performance also brought its own labeling problems. But this, really, is the point of it all. I’d Hide You certainly subverts the traditional format of audience and performer, yet it does it so elegantly. In asking the diners if they had seen the yellow performer, those diners had moved from being completely unaware of the performance being played to becoming characters within it. First in the eyes of the audience playing along, and then, as they start to process what is happening, in their own eyes as well.

A performance on the run