Fairer funding for all

In light of the current debate about ACE's distribution of funding, Carol Reid explains how the regional allocation formula built into Youth Music's grant-making process is leading to a more equitable balance across its portfolio. 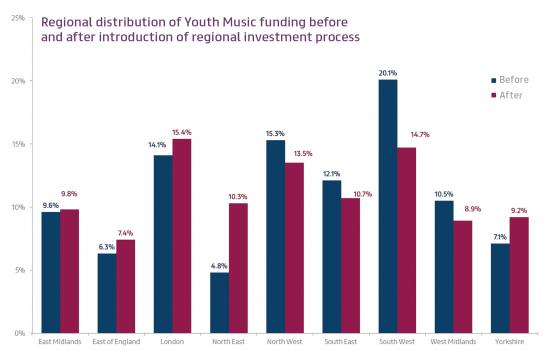 Regional funding before and after the regional investment process

Since the publication of the ‘Rebalancing our cultural capital’ report, there has been much debate about regional funding allocations for the arts. Indeed, the current Culture Media and Sport Select Committee inquiry of Arts Council England (ACE) is asking specifically whether the geographical distribution of funding is ‘fair’.

At the National Foundation for Youth Music, the fair distribution of funding is of paramount importance to us and so in 2011 we introduced a regional allocation formula into our grant-making process. This is beginning to lead to a more equitable balance of funding across our portfolio.

Our vision is that life-changing music making is available to all children and young people, and as a charity our explicit focus is on those with least opportunity. In this way we differ from many other arts funders: our priority is not the production of art for audiences, but the positive outcomes arising from children and young people producing art, in our case making music. Among our diverse portfolio we have projects working with young people in very challenging circumstances, from work in hospital settings, looked-after children’s choirs, projects offering music mentoring to children in special schools and lullaby composition projects for young children with development delay.

it is only by being honest about where we can improve, using evidence, and taking action now that we will start to redress the balance

We are a designated distributor of £10m per year of Lottery funding via ACE. We currently invest in over 400 projects across England, supporting more than 90,000 children and young people every year. We take an evidenced-based approach to distributing funds, which means that we look at our own data regarding existing provision, as well as the ever-evolving needs of regions and localities based on evidence created and published elsewhere.

Our regional investment process is made up of two steps. First, we use a range of internal and external data to identify the priority status of each region:

The data is entered for each region and leads to a corresponding points score based on distance from the overall average (mean) in each category (areas that are most deprived are furthest from the mean and score the highest number of points). Points for each criterion are added together to give an overall rank, and a tertile rank (i.e. distributed into three − low, average, or high priority) for each region.

The second step is to then identify the value of applications we have received overall to determine what the average success rate would be (it is usually between 30 and 40%). We then weight the success rates for each region by up +/−20% of the average rate depending on the priority score of each region. So the high-priority regions receive positive discrimination and their success rate at each funding round could typically be around 10% higher than the average-priority regions. This gives each region a notional investment amount at the assessment panel, with applications working across regions or nationally considered separately.

The reason we weight success rates (rather than working to pre-determined investment amounts) is to ensure that all regions have a minimum level of investment at every round. While we want to increase our investment in certain regions, we also need to ensure a minimum quality threshold among the projects that we fund.

Since introducing this approach we have seen a rebalancing of our investment away from the south east and the south west (areas where we historically received the most applications and therefore funded the most projects). Funding to London has increased slightly over the period but it does not receive disproportionately more than other regions and is broadly in line with the proportion of the under-19 population resident in London (15%).

We have started to see greater equity across all regions, with the north east and Yorkshire (the two top priority regions when we first undertook the exercise in 2011) moving closer to the average in terms of their points scoring. In addition, our investment in the 20% most deprived local authority areas (according to the index of multiple deprivation) has increased by 8% − from 37% in 2011/12 to 45% in 2012/13.

It is not just about being responsive to the number of applications we receive. If there has been a historic lack of investment in an area then chances are we will see fewer applications located there. That is why funders need to be intelligent and respond in appropriate ways. One way we have done this is by introducing additional funding for our strategic ‘Musical Inclusion’ grant-holders, who are charged with identifying areas where there is little activity taking place (cold spots), and developing sustainable provision and working with emerging (breakthrough) practitioners, who are nurtured to deliver future activity.

Other funders have tackled these issues in different ways. ACE’s Creative People and Places Fund specifically targets areas of low cultural engagement. The Garfield Weston Foundation recently introduced the Weston charity awards, a package of funding and organisational development support for organisations in the north east, after seeing a decline in applications from that region in recent years.

Undertaking the regional prioritisation process at the start of every funding round is a useful exercise as it has enabled us to gain an up-to-date picture. We run a training course for Youth Music grant-holders and potential applicants on taking an outcomes approach, and the location of the latest training round in the North East and West Midlands was in direct response to their priority status. As we undertake a review of our funding programme we will explore how we can better respond to geographical imbalances, building infrastructure where it is currently lacking and responding to ever-evolving need.

A recent ArtsProfessional survey asked "Should the distribution of Lottery funding for the arts reflect regional population densities?" This may be a simple formula for funders to adopt, but we argue strongly against this being used as a sole measure, as it takes no account of deprivation (which is not evenly spread across the country) and hides rural isolation and other geographical issues.

We strongly agree with ACE that great art should be available to everyone. We all want a diverse, thriving and accessible arts infrastructure, reflective of the culture in which it exists. To achieve this, funders need to take an intelligent approach to ensure an equitable and fair distribution of funds across the country. This approach might start with the development of a geographical investment process, but this will never be an end in itself. Funders should be looking further than this to try and overcome the root causes of the imbalances. This will not be an overnight process, but it is only by being honest about where we can improve, using evidence, and taking action now that we will start to redress the balance.

Carol Reid is Programme Manager of the National Foundation for Youth Music.
www.youthmusic.org.uk