Much more than a name change

With its new name and status as an independent charity, Peckham Platform is a very different organisation, according to Emily Druiff. 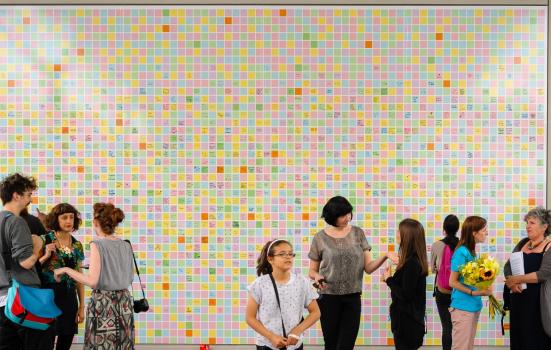 At the end of January, the signs outside our gallery on Peckham Square were replaced. ‘Peckham Space’ became ‘Peckham Platform’. Initially, to some, this may appear to be nothing more than new signs, alliteration and a lick of paint for a new year. However, over the coming months I hope that many will see the impact of a far more profound change for the organisation I lead: our relaunch as an independent charity with a renewed, ambitious mission to drive forward the practice of commissioning contemporary art for social impact.

In 2000 regeneration in Peckham was the focus of international attention. Will Alsop’s striking new library opened, won the Stirling Prize and became the subject of commentary and discussion in the national media. At the same time two individuals involved locally in the arts, Russell Proffit and Jude Freeman, were proposing that a new public gallery sit alongside the library on Peckham Square. Working for Southwark Council and Camberwell College of Art respectively, they envisioned a space that would, among other things, encourage young people in Peckham to progress to higher education. Their pitch to a European fund for civic squares was a success, but bureaucracy and institutional wranglings delayed the project. It was not until 2010 that we opened as Peckham Space – officially an arm of Camberwell College, and funded jointly by the University of the Arts and Southwark Council.

Four years later, we have gone a long way towards the fulfilment of our founders’ vision, and I hope they share my pride for what has been achieved. We have built a unique space dedicated to commissioning artists and artworks in partnership with the community, hosting 17 exhibitions and commissioning work from 26 artists. We use our prominent high street position to encourage participation and access, and have collaborated with community groups ranging from mental health service providers to residents’ networks and after-school provision for young people. Most visibly, we secured the preservation of the remarkable Peckham Peace Wall that documents the community’s response to the riots of 2011 through 4,000 personal messages. It is now permanently situated opposite the gallery on Peckham Square.

So why this change and why now? First, our ambition had outgrown our identity as a space. Our practice could no longer be confined to our 56 square metre home, undeniably restrictive when used purely as a space for exhibitions. However, by employing the gallery as a platform – and in its design and situation it feels very much like a stage – our content and impact can be amplified. So, ‘platform’ is a deliberate choice of word that I believe gives us an identity that reflects the reach and ambition that effective social arts practice must have.

Second, we outgrew the way we were structured and funded, and the relationship with our founding institutions had become restrictive. As an arm of the University of the Arts London (and Camberwell College of Arts specifically), we were not able to apply to trusts and foundations directly (and in doing so, compete directly with other college departments). Furthermore, being part of a comparatively wealthy higher education institution did not make us a particularly fundable proposition. Becoming an independent charity solves both problems, and we are now able to compete in the marketplace on our own terms and develop a strong mixed funding model. We will shortly launch a donor scheme to target individuals and businesses and we are preparing to apply for Arts Council England National Portfolio Organisation status, based on our commitment to sector and practice development work. We will also make our case for support to relevant organisations such as Outset and the Paul Hamlyn Foundation.

Personally, becoming independent feels a lot like a graduation, the institutional equivalent of moving out from your parents'. The comfort of guaranteed core funding may have gone but with its departure come important, necessary freedoms as we seek to grow and develop. The lack of certainty adds a degree of motivation, horizons expand, and importantly, I can now begin to put a governance structure in place that can share and support my long-term vision for the organisation. This has started with the appointment of our chair, Richard Watts. Richard is an organisational development strategist for the consultancy People Make It Work. Already a committed supporter, he comes with a deep knowledge of our sector and the issues we face. His experience helping Southwark develop its cultural strategy in 2013 and the fact that he has lived locally for seven years are invaluable. Together we have already redrafted the organisation’s mission and started to formalise our ambitions for the next five years.

Having a chairperson has also had a growing impact on my own role. I had become used to reporting to a line manager and, while I am obviously grateful for the support I was given in that capacity, the discipline of working with a chair is much more rewarding. I work more strategically and make independent decisions with the confidence and comfort of a vision and responsibility that I now share with a supportive, growing team blessedly devoid of conflicts of interest. I can be less focused on gallery management and the delivery of sequential projects and more on organisational leadership, engaging peers and advocating for deeper and more meaningful social practice across the sector.

It may sound like a strange statement to make during such difficult political and economic times for the arts and education, but it feels like exactly the right moment for Peckham Platform to go it alone. Our mission needed revisiting, our remit needed to grow and I need the autonomy to focus our engagement with higher education on areas of need. One immediate result is a new partnership with Central Saint Martin’s College of Art and Design to embed social practice into its curriculum. It may be a partnership within an institution we know well, but it is great to see us putting feelers out into a wider sector and sharing our experience. I want us to be a leader of excellence in social arts practice and that means that while our community will always come first, we need to be taking our mission beyond south east London for the benefit of other organisations, communities and artists.

So, what can you expect from us in 2014 and beyond? First, the scale and ambition of our programme will grow, both in the gallery and off site in the community. We have learnt that to have an impact, social art practice cannot be rushed, so we will develop opportunities for artists to work over longer gestation periods. We will continue to partner with local groups and organisations while collaborating with new national and international partners. Finally, in tune with our name, we will establish a platform for debate and discourse about contemporary visual arts and Peckham. It is vital that we deepen our exploration of the social role of arts in the context of regeneration and disenfranchised or dispossessed communities. I am particularly keen to gather relevant voices to consider the rapid pace of regeneration on our doorstep. It feels as if everyone is grabbing a piece of Peckham while it is hot – but who benefits?

Much more than a name change