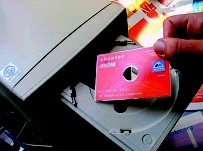 Sometimes it helps to be a parent, writes Carol Jones. I can?t remember if it was Shreddies, Minibix or maybe even Golden Grahams, but one day early last year I found a round, mini CD-Rom attached to the outside of a cereal box. Neat. The CD was promoting Lego Bionicles (for the uninitiated they?re small robot things - I think) and later when I plopped it into the centre of my CD tray I was impressed. Sexy and simple enough for even a grown-up to get to grips with, it was full of interactive sections and live links to the Lego web site and inboxes. Never one to shy away from a bit of creative theft I started thinking about how Chapter might benefit from this whizzy bit of new technology. Cost would be important - I typed a few random words into a search engine: CD-Rom, production, that sort of thing. Up came a handful of sites, mainly in the USA, of companies that produce mini CDs. It was here that I found out that mini CDs can be cost-effective, and also that they don't need to be round! They can be the size and shape of a credit card and hold from 30 - 80MB of video, sound, animation, response tools, downloadable screensavers and more. The idea of the Chapter iRom was born. 2001 was Chapter?s 30th birthday year and as part of the celebrations we planned to include the production of something that would mark our 30 years of innovation and success. The iRom (short for Interactive Read Only Memory) was ideal: it would replace our existing corporate brochure but have the advantage of being far more dynamic, interactive, measurable and fun. Crucially, with the right content, it would also have a much longer life-span. If we made the copy time sensitive the iRom would be out of date at best within months. So we made the content timeless and added live links to our website from every section, ensuring every user would have access to up-to-the-minute information. We approached our print designers, the creative design agency Seven, to help us create this piece of cutting-edge, wallet-sized technology. The creative and production process presented us with several challenges both technically and in terms of marketing. An understanding, not only of our target audience for the iRom, but also of the likely minimum specifications of their computer equipment, would define its parameters. It was also vital that it would work across both Mac and PC operating systems and that it would be fully bilingual, using both languages to reflect our place in the capital city of Wales. Here, as in so many other aspects of life, size was important. Our credit card sized iRom needed to be small yet perfectly formed, so sensitive editing of the diverse content was required to fit everything onto its limited recordable area. Seven developed a unique, 3D, animated environment to form the backdrop to hundreds of performance, film, digital and visual arts images that fade in and out of each page. Sections include information on our 30 years of history, on our role as one of Europe's leading centres for the contemporary arts, our place on the cultural world map, our services, an archive and even an interactive quiz. Music also makes an impact. Early on in the process I commissioned composer Chris Vine to create a series of short tracks - not quite a Chapter anthem but music that gave a flavour of the centre and our work. Chris did a brilliant job: the only problem was choosing which track to use. In the end, with the help of a snazzy, size-saving programme we chose four tracks and just a mouse click lets you change the music. So, the Chapter iRom has proved a winner, and in this competitive wired world of ours, forgive me if I seem a little smug as other arts iRoms find their way into my in-Tray. As they say, imitation is the sincerest form of flattery.