The process of producing a CD can be laborious and frustrating, but after two years making CDs to introduce festivals and series at the Barbican, David Hoskins knows the ropes well. 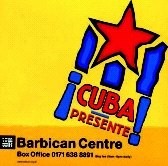 In May 1999, when ?Buena Vista Social Club? was in cinemas, Ry Cooder?s CD was selling like hot cakes, and Cuba was the flavour of the season, The Barbican staged ?Cuba-Presente? and legends like Ibrahim Ferrer, Ruben Gonzalez, and Pablo Milanes set the place alight. The line-up for the Barbican?s CD compilation produced to accompany the festival, was so good that it competes with the Buena Vista CD as an introduction to the best of Cuba. Unusually, it was not used for a direct mail campaign in advance of the event. Instead, a copy was given to every member of the audience together with the free festival programme, which helped to create a real buzz about the festival. The Cuba-Presente CD may not have sold a ticket, but it was a stunning piece of PR. Weeks later, the Evening Standard ran a leading article about the rise of the Cuban artists. Alongside a photo of Ruben Gonzalez was a shot of the CD cover, the Barbican logo clearly visible.

The fact is that an audio track is a better introduction to a concert than a paragraph of text describing the music. There is also no better way to get music out of its box and let it speak for itself. Brighton Dome reopened this spring and we produced a CD to introduce the season. They insisted that the CD should reflect the diversity of the programming and we made no apology about mixing Vivaldi with Asian Dub Foundation. The CD gives the audience an excellent impression of the organisation?s artistic intentions. The listener will probably have heard at least one track by an artist that he or she would not otherwise have been exposed to, and may have decided to go and see an event that they would never have otherwise gone to.

It is often hard to quantify a CD?s direct impact on ticket sales, as so much depends on the context. Manchester Camerata has recently used promo CDs as part of a series of audience development initiatives. They previewed the season with a short CD of excerpts from works to be performed. They have been successful in increasing ticket sales, but I don?t claim that this is simply a result of the CD. It is one element in a cohesive and well-planned strategic marketing campaign, which includes traditional season brochures, flyers and adverts. CDs will never replace paper-based promotional material; they are a useful tool to enhance the campaign.

There are two aspects of making a promotional CD that always provide plenty of food for thought.

? Artists and Repertoire: The dilemma here is about where to find a recording to promote an event that hasn?t yet happened. With pop, jazz or world music this can be straightforward: use a track from the artist?s most recent CD, or better still, get a track from a forthcoming album that hasn?t yet been released. For classical music however, it is unlikely that you will find recordings of all the right works by the right artists. This isn?t necessarily a problem. The Manchester Camerata CD features only one track recorded by the Camerata. This may sound strange, but it answered the brief and it worked: the CD aimed to introduce the repertoire to an audience that was unfamiliar with it. 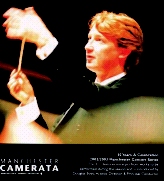 ? Copyright: This is the tricky bit. Who do you approach, what do you need to clear, and should you be paying for it? There are two types of copyright which cover any recording ? the recording rights, and the publishing rights. The recording rights are generally held exclusively by the record company. Most record companies will license a track or a short excerpt from a CD, often at no cost if it has a value to them. By including credits on your CD you are giving them advertising space to encourage people to go out and buy their CD.

The composer of the track or his or her publisher owns the publishing rights and most publishers are represented by MCPS (Mechanical Copyright Protection Society). Copyright clearance should be negotiated with the MCPS and there will be a cost, though the rules are blurred and it gets complicated when you start digging deeper.

There is a certain amount of common sense to all this. If your promotion is valuable to the copyright owners, then it is straightforward to clear the rights. For example, it is possible to clear a track by Turnage or Martland to promote a premiere by that composer. It is harder to clear a track by Shostakovich without a significant fee ? you will find it difficult to argue that your CD will raise the profile of Shostakovich. The good news is that works transfer to ?public domain? 70 years after the composer?s death, so Beethoven is available at no cost.

People often ask if CD-Rom is a dying format, soon to be replaced by the all-encompassing DVD. Wrong. Most of the top 10 CDs are now enhanced CDs with interactive CD-Rom. New media has enormous untapped potential and the arts world is behind in understanding its potential for marketing and promotion.

Enhanced CD is an excellent format and it is too often misused. I recently received an enhanced CD of an opera, which badly missed the point. Instead of a 40 page book with a libretto, it is available on CD-Rom. The libretto is difficult to follow on screen (and presumes that you like to listen to opera while looking at a PC screen), so to use it you need to print it out. This is a fine example of how CD-Rom should not be used as a replacement to print. It makes it harder for the user, not easier. This is not to say that a CD-Rom can?t be a textual resource. Indeed, if well planned it can be an excellent source of a large amount of information. But it should be planned creatively, from the user?s point of view, using the right new media for the right project - give it a chance to answer your brief and it is likely to surprise you.