How can accreditation add value to creative work with young people? Alice Young discusses Arts Award, the qualification for the arts in schools. 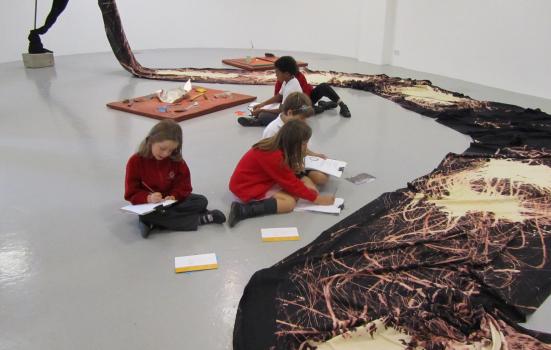 Children and young people are a constant source of inspiration and encourage us to consider the world from a fresh perspective. Since its launch in 2005, Arts Award has been finding its way into all sorts of places where young people are taking part in the arts: from schools and youth centres to galleries, museums and arts centres and even festivals, prisons and residential programmes.

It comes as no surprise that many young people love the arts, but perhaps more surprising is the fact that young people want national recognition for their achievements and enjoy the structure Arts Award offers. The success of the Arts Award programme from young people’s point of view has been outstanding, and if it is working for young people then we are confident it works for the professionals supporting them.

Last year Trinity College London and Arts Council England jointly commissioned a piece of academic research into the impact of Arts Award on young people’s lives. It is a three-year study that began in October 2012 that aims to shed light on what it is about Arts Award that makes it work. It is an interesting challenge that we have set ourselves because the study needs to explore the very broad contexts within which the award is taking place. It also needs to look at the value of arts education in its own right, while understanding what is unique about the award − designed by practitioners and young people − that makes it work.

The early and emerging findings from the research highlights that the ‘learning to learn’ or reflective learning element of Arts Award was perceived as highly beneficial to young people. The leadership aspect also rated highly as it gave young people the experience of facilitating others and an insight into the diverse range of skills needed to do this, including communication, creativity, command and compassion.

National accredited recognition was important for young people too. First, for practical reasons, such as to add it to their CV, include in their university applications and discuss at interviews. Second, the accreditation was valued because it legitimised young people’s artistic practice and awarded them for it.

Gaining all sorts of different qualifications at school is, in the main, expected, but Arts Award offers an opportunity for the full range of out-of-school settings too. It is designed to complement existing programmes and in many cases the flexible structure can help extend the young people’s experience in ways the professionals running the programme did not predict or expect.

Philip Cowell, Head of Programmes at English PEN, tells us: “It’s great that people in arts management can deliver Arts Award. Given that we run projects with young people it makes sense to add value and reward hard work.” And Kate Plumb, Youth Theatre Director at York Theatre Royal, says: “It’s a great asset to us as it increases the links between the youth theatre members and professional artists and creative teams in the building. Many of the young people have been offered employment in the fields they researched and experienced through Arts Award.”

Author, Broadcaster and former Children’s Poet Laureate Michael Rosen is an Arts Award champion and a vocal advocate for the important role creativity plays in young people's lives. He argues that giving young people creative freedom is key: “I like the way Arts Award is based on a reflective model of learning, encouraging leaders to focus on children and young people as individuals and as creative artists in their own right. Arts Award is a flexible framework, rather than a set curriculum, which ignites ideas rather than dictating answers.”

Like us at Trinity, Rosen believes that embedding creativity in the lives of young people from an early age helps them fulfil their educational potential. Vitally, it also helps them to develop the communication and leadership skills that provide such an important foundation for the personal growth they will need to succeed beyond the school gates.

A call for educators to bridge the digital divide was a feature of the Cultural Education Review 2012, in which Darren Henley encouraged everyone involved in cultural education to ensure that young people have the opportunity to acquire the digital skills that are increasingly important.

In response to the growing success of Arts Award and the interest in digital, Trinity and our technology partners have been working with young people to design and test a new digital portfolio called Artsbox. It will allow young people taking part in Arts Award to store and share their creative work, and gain important digital skills in the process. The national roll-out of Artsbox in 2014 will open up Arts Award to even more young people, allowing those who are not able to work together face-to-face to link up and share their creative work. The digital app attached to the tool will enable young people to capture their work on the go and send it straight to their own safe space on Artsbox.