Two arts venues involved in ‘Showtime’, the Mayor of London’s outdoor festival, recognised the positive impact of working outdoors and, as Jane Packham reports, have since formed a consortium with other venues in outer London boroughs. 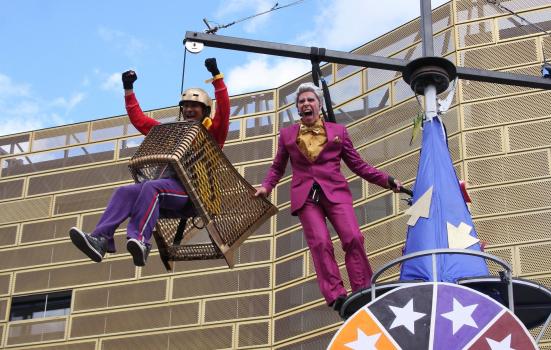 The opening night at The Albany
Photo:

In summer 2012 London came alive with an extraordinary range of high-quality, inclusive performances taking place on high streets, in parks, on waterways and in other unusual and iconic locations − a summer like no other. ‘Showtime’, the Mayor of London’s outdoor festival, supported by Arts Council England (ACE), took centre stage, delivering over 1,000 events across the public realm, reaching over two million people and 50% of these new audiences.

Two venues based at either end of the city, the Albany in Deptford and Watermans in Brentford, worked together with Showtime and saw the positive impact of working outdoors. Both venues wanted this to continue and grow, for other outer boroughs to host outdoor work, and so 'Circulate', an outdoor arts consortium for outer London boroughs, was launched.

Raidene Carter, Head of Creative Programmes at the Albany and lead partner of Circulate, says: “Circulate has been in the making for over 18 months. It was started by a group of arts centres, who met for social and professional reasons, at a time when there wasn’t just something ‘outdoorsy’ in the water, but a great big London 2012 legacy splashing about in it!

“The Mayor of London’s office had been our partner (the Albany and Watermans’) via Showtime. They were key in conversations about the legacy of our outdoor work and importantly helped support our idea for a strategic project.”

In September ‘Spin Cycle’ opened on Deptford High Street. Created and produced by EEA, it is the story of a game show, charting competitors each wanting to win "the ultimate luxury lifestyle". Raidene says: “I was part of the team doing face-to-face evaluation and it was hugely gratifying to speak with people. Everyone I spoke with said they strongly agreed that events like this improve the perception of Deptford. All Circulate venues tackle audience engagement in different ways: At the Albany we became official market traders and set up stall on market days for two weeks prior to the event to ‘trade’ Spin Cycle and autumn season information.”

All of the venues want to shape and enhance their town’s reputation or ‘place-making’ as Carter describes it: “Having been part of the Circulate story from the outset, it was personally a relief and a wonder to see everything come together. From words and numbers on paper to the physical things that we all really want from outdoor audiences: smiles, neck-craning, jumping, gawping, clapping, laughing – and then just as importantly, people hanging about, catching up with friends... place-making.”

The simple premise of Circulate is that London is no stranger to spectacular outdoor work, but Circulate plans to create outdoor arts experiences that both involve and reflect the local communities that the venues serve. Raidene does not want this amazing work to “swoosh in, catch our attention, then swoosh out again”. She wants it to mean something and to achieve “other stuff” in the process. This other stuff is what makes Circulate tick: year-round youth and community engagement in street arts, grassroots residencies creating new outdoor arts and skill-sharing in marketing, production and event access.

Raidene concludes: “We don’t have all the answers right now, but we’ve identified all the strategic questions and have a clear, shared ambition to give it good go.”