Festivals for the future

Gillian Taylor looks at how festivals can involve communities in making site-responsive works that create a sense of pride in lost and forgotten places. 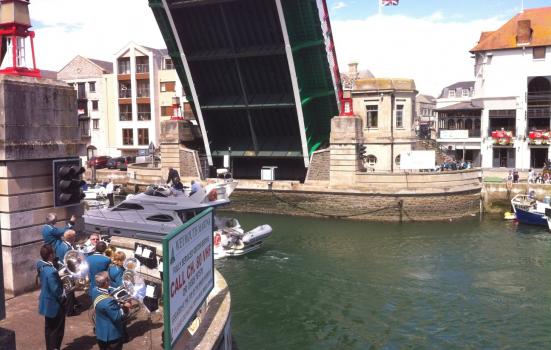 In many local authorities, culture is under threat. It is seen as an optional extra because it is not a statutory service. Somerset was one of the first local authorities to close its culture department, others followed, and most are under considerable pressure. In some cases, local authorities are outsourcing culture to other partners. “Arts organisations can benefit from this,” says Alex Murdin, curator, producer and researcher. “It makes sense for arts development organisations to work across the different sectors of the local authority, becoming more important to social services, the environment, cultural tourism, economic regeneration and other areas. The arts can provide a mutual environment for this cross sector working to occur.”

In Dorset discussions are underway about how the arts can contribute to the objectives of the new Health and Wellbeing Board. Nationally, arts and culture has been added to the Office for National Statistics’ measures of wellbeing. This is defined as the "percentage of people who have engaged with, or participated in, arts or cultural activity at least three times in the last year".

Devon County Council has moved to commissioning its arts and culture – a pragmatic approach to the way forward for arts funding in the county. One consortium focuses on performance, while the other, Arts Wave, delivers against the participation agenda. One of Arts Wave’s aims is to "enrich the lives of participants and contribute to their wellbeing". The consortium of DAISI, Wolf and Water, Dance in Devon and The Devon Guild of Craftsmen is developing work in settings where people from a range of target groups can best engage with the projects. This includes local festivals and events.

Festivals and site-based work can also help communities to develop and relate to the places where they live. b-side works with artists to involve communities in making new site-responsive work, revealing the marginal, often forgotten and less commercial aspects of coastal towns and creating a sense of pride in those places. For the Cultural Olympiad, composer Hywel Davies was commissioned by b-side to create a new piece of music especially for Weymouth. The resulting piece called ‘To-ing, fro-ing’ was written for performance at the Town Bridge by Weymouth Concert Brass. The band played this evocative site-specific piece of music live as boats came and went through the lifted bridge.

Another project, Activate, ran community workshops with people on Portland to create blue butterflies from paper, wool and other materials. The Cretaceous Silver Studded Blue Butterfly is only found on Portland, and local people created one butterfly to represent each young person on the island. “We worked with well over a thousand people to make the piece, from adults suffering from dementia to pre-school children.” said Kate Wood, Activate’s Executive Director. “There was a real sense of a whole community from the island who embraced the project.” The butterflies were placed along a trail and were part of a larger project called ‘Wind and Harmony’ which included a sound installation and dance performance.

b-side festival and the Wind and Harmony project were part of Maritime Mix, Weymouth and Portland’s Cultural Olympiad and London 2012 Festival programme, which as well as contributing to the communities’ sense of place, created work for artists, arts organisations and the creative industries in the south west of England. Economic impact figures produced by Dorset County Council show that this created the equivalent of 52 full-time temporary jobs, increased the gross value added (GVA) for Dorset by £2.5 million and increased the economic output of industries in the Bournemouth Dorset and Poole sub-region by £5.75 million. This economic benefit was not based in permanent venues but created by small festivals and site-based work in and around Weymouth and Portland.

The arts also have a role to play in local planning. Creativity in Community-Led Planning in Dorset sets out ways of making the most of local resources. This guide was produced as part of a new initiative which aims to put arts and culture into the heart of the neighbourhood planning process. It is an N3 (Nature, Network, Neighbourhood) project managed by Ginkgo Projects on behalf of the Dorset Design and Heritage Forum, funded by Arts Council England and Dorset Area of Outstanding Natural Beauty.

In a pilot scheme, artists We Made That worked with local groups on a cultural audit for the neighbourhood planning process in Gillingham, Dorset. The pilot demonstrated the economic case for creativity in planning as well as the importance of considering culture at the start of the planning process. In his introduction to the guide, Oliver Letwin MP said: “Localism is at the heart of the government’s new approach to planning and development in the UK. The idea that communities and local people should be empowered to shape the present and future is crucial in creating successful, sustainable and prosperous cities, towns and villages. The creative industries have a key role to play in localism through their ability to enhance the fabric of the built and natural environment, showcase local culture and create new jobs.”

The role of festivals and place-based arts in strengthening local partnerships and regeneration is one of the focuses for the symposium. b-side Producer Sandy Kirkby says: “With so many venues affected by arts funding cuts, festivals, biennials and events that present contemporary art in temporary locations are increasingly being seen as the way to commission and present visual arts and media. The conference is an opportunity for artists, producers, curators and other cultural professionals to discuss the issues and opportunities for festivals and site-based art.”

Gillian Taylor is a freelance arts communications and PR specialist.

Alex Murdin is leading Resonant Terrains, a symposium taking place from 10 to 12 October on Portland, Dorset. A £60 ticket includes artist-led events, film screenings, meals and can be booked online through b-side.

A hospital with a soul
Festivals for the future