Dianne Greig explains how Glasgow’s galleries and museums are collaborating through the WhiteNOISE project to develop the city’s audience for the visual arts. 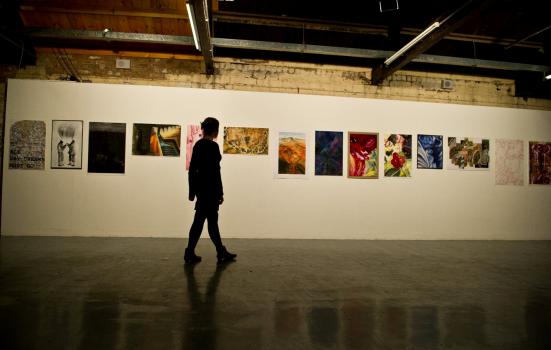 Arts marketing professionals are often experts in working creatively and effectively within extremely tight budgets and with limited resources, while many smaller arts organisations operate in an environment where the future is uncertain beyond the current exhibition or production. ’Twas ever thus, some might argue.

With arts budgets increasingly under threat throughout the UK, actively pooling resources, talents, contacts and techniques would seem to represent a powerful strategy which − though anathema to some sectors – is thankfully an approach which arts professionals and practitioners actively embrace. Nowhere more so than within Glasgow’s culturally vibrant and diverse visual arts communities, where we are delighted to be working with representatives from many of the city’s visual arts and heritage organisations through the WhiteNOISE project.

Glasgow has a proud history of creative collaboration, and is home to many internationally recognised artists including Turner Prize winners Martin Boyce and Richard Wright. In addition, the city’s respected Tramway arts space will host the 2015 Turner Prize exhibition and award ceremony.

The WhiteNOISE project is a ‘sector first’ that provides the most detailed and extensive overview to date of audiences and attendance for the city’s visual arts. As Scotland’s intelligence and innovation partnership for the cultural sector, Culture Sparks has been involved in delivering insights, support and intelligence to Scotland’s cultural organisations for over eight years prior to the launch of the project. Creative Scotland, the national lead and development agency for the arts, screen and creative industries, has funded and actively supports the programme.

The project began with a comprehensive mapping and profiling of the city’s visual arts communities, with support from a roll call of participants that reads like a virtual Who’s Who of Glasgow’s visual arts world. We then wove together findings from over 1,500 visitor interviews, conducted at 11 key city venues, with detailed demographic profiles driven by visitor postcode. That research was supplemented by detailed analysis of social media activity from over 75 of the city’s visual arts venues, culture and heritage organisations, including analysis of activity surrounding the Glasgow International Festival of Visual Art (GI) 2012.

It delivered a toolkit of low-cost marketing tips, techniques and tactics hand-picked to meet the needs of museums and galleries

Senior figures from Glasgow’s visual arts communities were very generous with their expertise, taking part in a series of confidential, in-depth discussions which provided invaluable insight and expertise. Interviewees were drawn from a range of disciplines within the visual arts and heritage sectors, and included curators, marketers and artists. As a result, we have been able to identify key challenges associated with increasing audiences, and to provide for the first time an overview of the characteristics, distribution and behaviour of the city’s audience for visual arts. The scope of the project draws in organisations traditionally classified as craft and heritage venues as well as commercial and not-for-profit art galleries, reflecting the extent to which visual arts audiences migrate across perceived artform and sector boundaries.

The research phase of the project has been followed by a series of workshops, offered free of charge to representatives of Glasgow’s visual arts organisations, designed to provide feedback from the project to date: practical insights and inspiration from fellow practitioners and networking opportunities for the visual arts community. Guest speakers have included Hugh Wallace of National Museums Scotland and, as part of a collaboration with Ambition Scotland, Rebecca Taylor, Communications Director from MoMA PS1 in New York. Another event, hosted at Wasps’ Studios, South Block, Glasgow and entitled ‘Digital Savvy: agile marketing for the visual arts’ was led by digital media veterans David Craik and Ewan Colville of Bright Signals. It delivered a toolkit of low-cost marketing tips, techniques and tactics hand-picked to meet the needs of museums and galleries. Future resources will continue to concentrate on devising and delivering collaborative projects to help grow new audiences for all.

Galleries and museums taking part in WhiteNOISE range from national treasures including Kelvingrove Art Gallery and Museum, the Burrell Collection and St Mungo Museum of Religious Life and Art, to educational institutions such as the Glasgow School of Art, not-for-profits including Wasps Artists’ Studios, contemporary venues such as Tramway, Centre for Contemporary Art and The Common Guild, and the Glasgow International Festival of Visual Art, (GI).

David Watt, director of Glasgow Sculpture Studios, commented: “Glasgow’s visual arts sector is incredibly developed, but it’s also incredibly fragile and highly diverse, with lots of small independent organisations with little infrastructure as well as some big, established institutions. The WhiteNOISE project provides a way for them to learn and share in a supportive environment, working together to make the sector more robust.”