London 2012 promised to inspire a generation in both sport and the arts. Recent research makes Moira Swinbank believe that this is happening but the funding must continue, as well as the buy-in from decision-makers. 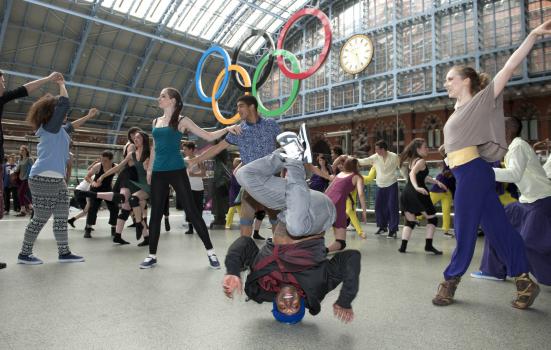 Participants at the Big Dance at St Pancras
Photo:

Legacy Trust UK is an independent charity, set up in 2007 to create a lasting cultural and sporting legacy from the London 2012 Olympic and Paralympic Games. As a principal funder of the Cultural Olympiad and the London 2012 Festival, we have funded a diverse range of programmes and projects, from dance to digital media, animation to athletics, film to festivals.

The work we have funded has already made a difference to many people. Marie, 29, and Emmie, 21, joined our Games Time project in the East Midlands, which used hundreds of local people across the region to stage four high-profile outdoor performances. Both women were so inspired by their experience of feeling more connected to their community that they organised their own dance event with local schools and dance groups. The performance was a huge success and raised funds for two local charities. Both women credit the project with changing their outlook on life, increasing their confidence and helping them engage with their community.

We created a legacy standard, to which all our funded programmes had to adhere

Games Time also made a huge impression on East Lindsey District Council, which was involved in the delivery of the first performance in Skegness. The team at the Council was impressed by the participative and collaborative approach taken to ensure that hundreds of local people were included. The positive impact of engaging local people was so marked that they decided to completely review their own approach to arts provision in the area, increasing their budget more than five-fold for the coming year and ensuring that culture is at the heart of all they do.
We are keen to identify if the legacy to ‘inspire a generation’ was being achieved. We wanted to understand how young people across the UK felt about the games, and if it had impacted on them or inspired them to participate in sports or cultural activities. We commissioned research to dig deep and find out what young people really thought, rather than putting words in their mouths. We held focus groups with eight groups of young people, some of whom had been involved in our projects and others who had not, then took an online survey to over 1,000 young people across the country.

The results of our research were positive. We have been surprised at just how well the Games were received across the board, and how young people’s perceptions of their own abilities and ambitions changed as a result. Even young people whose only engagement was watching the Games on television still felt that London 2012 had made an impact on their outlook.

The findings, which will be launched on 30 April, will be of interest to a wide range of stakeholders, not least the arts sector. As far as we are aware, this is the only research of its kind that has been conducted with young people to discover their views on the impact of the Games. From an arts and cultural perspective, it has some interesting insights into young people’s motivation for getting involved and what they want to see as a result of dipping their toes into culture for the first time. Many young people have had their eyes opened to their potential and are now hungry for more. There is a real opportunity for organisations and institutions to capitalise on this and engage more young people who might not have been open to getting involved before.

We started working on legacy as soon as we were founded. We created a legacy standard, to which all our funded programmes had to adhere, which outlined criteria to create the best possible circumstances for a lasting legacy. We supported our projects from the outset to develop cross-sector partnerships to help them develop and deliver their work. As a trust, we are due to close down at the end of the current financial year, but this does not mean that the legacy of our funded programmes will end. We are delighted that so many of our projects are continuing to deliver work in communities across the UK, despite our funding having ended earlier this year. The projects we developed and supported have caught the imagination of the communities in which they are based, and have attracted support from a range of commercial sponsors, other funders, local authorities and individuals. The demand for these projects is such that they are leaving a tangible legacy for many organisations and individuals across the country.

Our legacy will be one of enabling and empowering. The way we have worked – as a supportive funder with a flexible approach to grant-giving that is not risk-averse – has enabled projects that would not have been supported through more traditional funding routes to flourish and be successful. We have seen evidence of organisations we have worked with applying our approach to their own projects, and our decision to pay grants up-front has enabled projects to develop relationships with partners to secure over £55m in matched funding since 2008. These partnerships have been the backbone of our project delivery and are continuing to play an important role in the legacy of our work.

For the trust and our projects, the impact of London 2012 has been hugely significant. It has changed the perceptions of a nation on the ability of the UK to hold a major international event and has created a shift in the perceptions and understanding of disability. It has inspired people and brought creativity and culture to every corner of the UK. But we cannot be complacent – positive changes like those our projects have influenced require funding and buy-in from decision-makers. They require sustained support over many years. The Games can continue to make a difference to people and communities, but only with the support from the organisations, institutions and local authorities around them.