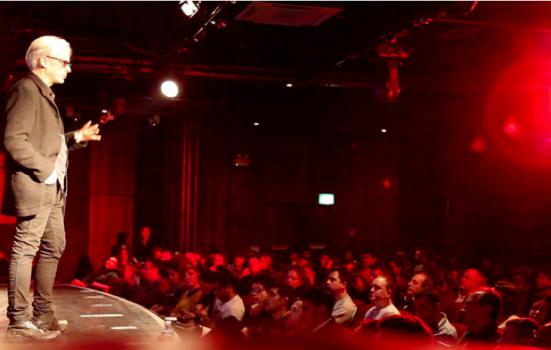 The arts industry is a struggling industry, where budget cuts are being made left, right, and centre by the government and the Arts Council England. What is more, the closure of the UK Film Council in 2011 has made the movie-making business in particular a difficult one to crack.

20 years ago no one was promoting independent films in the UK. The market was dire and struggling to compete with other markets such as the US. Spotting this niche in the market and driven by my passion for all things film, I decided to set up the Raindance Film Festival. We started with just £150 of my own money and knew at the time that in order to grow and gain credibility in this industry, it was about self-financing, networking and working with talented people. So with limited resources for marketing and PR, we relied on faxing invites and posting flyers. The opening night screened ‘What’s eating Gilbert Grape?’ and we were fortunate enough that the producer approached us to premiere the movie in Europe. The event was a sell-out.

We have been lucky enough to work with big names such as Christopher Nolan and Edgar Wright, while being able to showcase some of the best independent films at our festivals. It is building this sense of community which has helped the festival grow to the size it is now. We originally started in London, but have since opened offices in Toronto, New York, Budapest, Berlin and Brussels. This international growth has been driven by our marketing efforts over the years.

To increase our customer base further and generate more awareness, we partnered with Groupon to offer Saturday film school classes for £39. As part of this marketing strategy, we have received over 10,000 bookings which has not only raised awareness of the festival in the UK but also allowed us to expand by offering additional courses overseas. As a result, we have seen our training course numbers go up by 35% from last year, and by upselling from the Saturday film school to other courses it has brought in around £4,000 of profit from each class. In addition, attendance to the festival in 2012 was up by 40% from 2011, a fantastic level of growth thanks to our increased marketing activities over the year.

Looking forwards, we are planning to launch more courses this year. Another big focus for 2013 will be providing more movie-making courses and film training via online channels, so that we can grow our international presence and make our courses available worldwide.

Elliot Grove is the Founder of Raindance Film Festival.