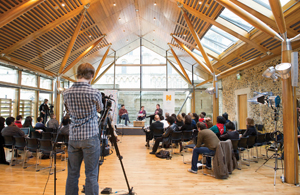 It’s an exciting time for literature down our way. In early May Norwich became England’s first UNESCO City of Literature after a Writers’ Centre Norwich-led bid. A few weeks earlier the Centre was granted £3m from Arts Council England (ACE) to develop an International Centre for Writing – due to open in 2016.

Whilst the Centre will be based in Norwich, it will be working as an international hub, actively campaigning on behalf of and promoting access to the best world literature and making sure that writers and the work they produce are able to reach readers. It is due to open its physical space in 2016, but in the meantime, as well as fundraising we’re going to be getting underway digitally. There are lots of questions around how to safeguard and nurture the best in world literature and our current job is to raise them with readers, writers and the industry. Funding from ACE’s Catalyst fund enables us to start raising these critical questions online.

In order to get a meaningful conversation going we have to find the right people and get them to trust us to guide an open conversation in which they will feel comfortable and will give of their best. We will not just be doing this online, but online work will be key in this phase as it is a great way to cross borders.

Board member Bill Thompson has been advising us to think widely around what digital work involves, moving away from notions of one static website and freeing our minds to consider multiple ways of reaching people across the web: going out to them rather than expecting them to come to us (and not just through the social media channels that we’re all using already). When we start discussions online we’ll be having them in beta, by which I mean we will be asking people to suggest how they think we should best proceed, and in the first phases at least, evolve in response to feedback and new information. We are not offering shiny, formed solutions, but rather a traditional artist’s workshop, with the ability to trial, scrap, mull and throw away before building something useful and beautiful.

What is clear is that our activity will involve lots of new creative work. We will be commissioning writing on specific themes to enable the general conversation. These commissions will be collaborative and cross-artform, involving both established and emerging practitioners from the digital, performance, live art and theatre worlds as well as traditional publishers and writers from across the range of literary genres. We will host virtual writers-in-residence, as well as showcasing work from the twinning of eminent and emerging writers. We will also develop long-term relationships with partner organisations and writers nationally and internationally, supporting the development of emerging writers too. What could be better than an online start-up to enable the International Centre for Writing to take root.