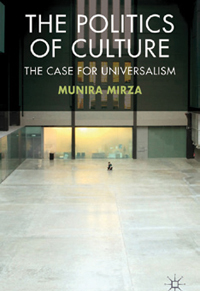 This is an important book, which should be required reading for those who think they know it all already. A refreshingly clear reformulation of some of the seriously fudged policy debates during the New Labour era, it is also something of a broadside against cultural relativism and the well-meant, but mealy-mouthed, ‘diversity’ trend. Along the way it incidentally exposes the hypocrisy of Tessa Jowell’s notorious and over-regarded 2004 ‘Government and the Value of Culture’ ‘essay’ and the equally flawed ‘Supporting Excellence’ (McMaster) Report – both made the same ludicrous error of using the word ‘culture’ as a virtual synonym of ‘the arts’.

Mirza has been Cultural Adviser to London’s Mayor since 2008. At the risk of offending by doing what she studiously seeks to avoid, it’s necessary to observe that the author as a ‘British Asian’ has the freedom to be disarmingly forthright in a way that politically correct and constrained public cultural bodies can’t be. The central thesis of the book is that the ‘cultural diversity’ bandwagon has rolled on to a point where consensus is now accorded higher value than truth, with conformity as the expected norm. Ambivalence obviates disagreement and is allowed to flourish because it condones the ‘safe’ coexistence of contradictory and conflicting arguments that are no longer ever honestly faced or given space. Thus, genuine cultural value has been subverted. Mirza nevertheless points out that disagreement and conflict cannot just be submerged under politeness for too long, and makes a strong case for some return to universalism in contemporary cultural policy.

Supporting evidence and examples are provided from two substantial case studies, Rich Mix in East London and Oldham in Lancashire, where the author grew up. The conclusions are on the whole well substantiated and convincing, I think, providing very serious food for thought. The case for some return to universalism and rebalancing the equation involving localism, diversity and minority interests is convincingly argued.

There is something of a downside in that the book claims at its outset rather more than we ever get from its ‘historical’ analysis and continuity (starting out from the 1901 Whitechapel Gallery). Key decades are entirely missing and important themes ignored. The metropolis versus the rest of England tension from 1955 onwards is completely absent (Melvyn Bragg’s brilliant formulation that ‘capital cities should irrigate, not drain’), although it’s necessary to understand this to appreciate quite how Arts Council England got into its current policy condition. The 1980s ‘Black Arts’ assault on Greater London Arts (which largely let the Arts Council off the hook) is unnoticed. There also seems to be an assumption that it was New Labour that got into policy obsession in a major way – but pamphleteers, think tanks and policy wonks in the arts and culture in the UK have been consistently wonking right across the political spectrum since the 1960s.

To some extent – maybe unsurprisingly (Oldham case study notwithstanding) – there is an unacknowledged London focus. Identification of the ‘politeness’ trap is spot on, but the author doesn’t appear to understand that this is a problem (yes, it’s cultural) of the English ruling class that the Scots, Welsh, Irish, English Regions and Europe still have to cope with. Nevertheless, despite the odd blind spots, the thesis is convincing and its effect is that of an invigorating, strong, unsweetened double espresso in a context of far too much diluted, dishonest and compromised froth. Read it!