Zoe Bottrell shares her route to a leadership role 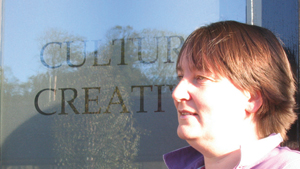 I set up Culture Creative in 2005 with a passion for delivering projects. After progressing through local government to principal officer, I decided ‘doing’ was what I wanted to do, not just policy setting and personnel management. It was a big step after over 10 years in the ‘safety’ of the public sector but I have never looked back. Our portfolio ranges from lighting shows and illuminated trials to marathons, visual arts shows, festivals and events development consultancy. Helen, who works for me, rang me the other day laughing asking: “Why am I hiding under a bridge with a super soaker?” It was just another day in the ‘office’ managing a promenade performance through one of our local market towns! It’s making things happen, not talking about it that’s important to us.

Castle Morpeth was where I really blossomed – I started as a lone sports development officer in a technical services department, line-managed by an architect and left a legacy of a department of 25 people covering sports development, arts development, tourism, parks and open spaces, and youth inclusion projects. I enjoyed the development of the team and watching it grow and evolve – creating a true cultural department across the disciplines. My director always called us the ‘can do corner’ – the best compliment as far as I was concerned. But then I had the opportunity to develop and deliver a show garden for Chelsea Flower Show with my parks staff – my bronze medal is still a prized possession! I knew from then on that ‘delivering’ was where my heart lay – not in Key Performance Indicators and arguing over and over again why culture is important to elected members. So after a brief secondment to the regeneration partnership, Northumberland Strategic Partnership, I took the plunge into freelance work.

South Tyneside Council took me into a world that bridged leisure services and education. I was one of 13 people working across the North East and had a wonderful network of people to work with. Working closely with Sport England, Youth Sports Trust, Coaching Foundation and Running Sport, I developed a programme of work that included two other members of staff, 40 schools and a huge number of clubs, which meant I was engaged with the community at every level. South Tyneside was my first urban working environment and it taught me a great deal, but after the completion of the fixed-term contract I had no hesitation in returning to my wider leisure, or what is now called culture, rural roots.

Although my shortest public sector stint, it was probably my happiest for many reasons. It was (no longer exists after local government review) a fantastic small and friendly team, where we all knew one another and cross-department working was an every day occurrence. I worked here with my ex-tutor from college (we both moved from East Anglia) and had a wonderful varied work programme. It’s also where I met my now husband and when I made my home in the North East – where I still live, just outside of Alnwick.