Scotland has more in common with Philadelphia than we might think. Pamela Bailey shares the fruits of US-style collaboration 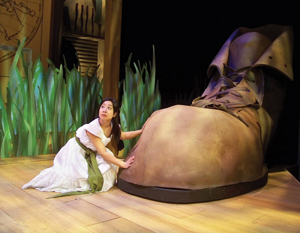 The need to work smarter, and more creatively, to achieve greater efficiencies with fewer resources is hardly news to the UK’s art and culture sectors. Yet how to achieve this, and demonstrate practical, measurable results from such a seemingly impossible scenario? A few helpful pointers can be drawn from two recent masterclasses entitled ‘The Strength of Numbers’, attended by performing and visual arts teams from all over Scotland.

Guest speaker at both events was Nick Crosson, Research Analyst with the Greater Philadelphia Cultural Alliance, which was set up in 1974 by nine of the area’s larger cultural organisations ahead of the USA’s bicentennial celebrations in 1976. The Cultural Alliance realised shrewdly that its best defence lay in collaboration and strength of numbers, and has been phenomenally successful in lobbying collectively on behalf of its 400+ members, drawn from the area’s arts, culture and tourism sectors, and serving a city of approximately 1.5 million and a region of 6.2 million. Membership fees reflect organisations’ annual turnover, starting at $150 for small groups with budgets of $100,000–$200,000, rising to several thousand dollars per year for those in the $1m dollar+ bracket whose larger marketing teams make correspondingly greater use of services including events calendars and shared marketing databases.

Notable Cultural Alliance successes include the 2009 campaign which harnessed public support to lobby politicians and prevented the proposed addition of state sales tax to ticket admission prices; fighting off a plan by the state legislature’s to slash arts funding by up to 70%; and the reinstatement of the City of Philadelphia’s long-closed Office of Arts and Culture. As well, up to 15 new programmes have been commissioned for new audiences following the award of ‘Challenge Grants’.

Nick Crosson explains: “The cultural community in Philadelphia is a highly co-operative group which freely shares information and expertise, thus it made sense to establish a standalone body for co-ordinated efforts. The two largest areas of our common work are advocacy and marketing. Advocacy includes lobbying Government on behalf of the entire sector, and securing new sources of funding from sponsors, foundations and individuals. Our common marketing efforts include gathering common data to include ticket sales, marketing costs and audience figures to argue a robust, factually-supported collective business case demonstrating the positive economic contribution made by our creative industries.

“In the UK, Government tends to gather this type of data whereas in the US it falls to non-governmental organisations like ourselves. Data are entered by members on behalf of their respective organisations into a single system. Working with another organisation, The Cultural Data Project, we can report actual sales figures, combined audience attendances, and compare marketing spend per sale across different groups. We publish figures regularly to allow close scrutiny by any number of interested parties, including politicians who are always keen to see hard facts governing return on investment, particularly for numbers of school groups attending publicly funded museums, galleries and theatres. Since all data entries are anonymous, Cultural Alliance members can also compare their own operating costs with others in the sector.”

The Strength of Numbers workshops were the result of a collaboration between the Greater Philadelphia Cultural Alliance, Culture Sparks in Glasgow and The Audience Business (TAB) in Edinburgh. The Philadelphia experience has resonance in Scotland. Ros Lamont, Chief Executive of TAB commented: “Cultural Alliance’s online ‘Philly Fun Guide’ has become their region’s definitive guide to sports and cultural events, publicising members’ events to a massive audience and partnering with key media outlets. TAB has been working to provide a comprehensive new web portal and online events guide called Clicket.co.uk, which has the potential to do the same in Scotland.” Julie Tait, Director for Culture Sparks, praised the Cultural Alliance’s “impressive reports which help legislators appreciate what is happening in Philadelphia’s cultural sector, including trends such as recent increased attendances resulting in ticket sales rising 5% despite the recession”, and the way it has harnessed data to demonstrate the negative impact which proposed measures, such as the now defunct move to add sales tax to ticket prices, would have had in terms of jobs and revenue lost to the economy. She sees important parallels with Culture Sparks’ work: results will soon be published of a five-year business data-gathering programme in association with The Federation of Scottish Theatre and TAB, which will provide a detailed snapshot of key aspects of Scotland’s arts and cultural sectors. She concluded: “Like the city of Philadelphia with audiences of 1.5 million – Glasgow and Edinburgh’s combined populations touch the one million mark. With such a heavyweight pedigree and so many similarities between our work, it made sound business sense to share a few of the Cultural Alliance’s successful trade secrets with Scotland’s equally vibrant creative industries. The two events seem to have sparked not merely ongoing healthy debate, but also some potential new creative partnerships. There truly is strength in numbers.”