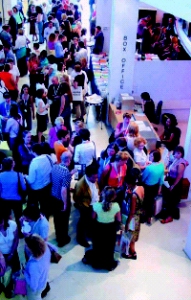 The Arts Marketing Association (AMA) conference is held for three days at the end of each July, explains Pam Henderson.
Around 400 people from across the UK cultural sector attend. The evaluation from Conference 2000 (The Lowry, Salford) showed that a significant minority of delegates found it difficult to get to know others over the three days. Some first time attenders found the experience quite overwhelming. For Conference 2001 (The Rep, Birmingham) we wanted to find a creative solution to the challenge of establishing rapport among a large number of people in a short space of time, that also had a link to the conference theme of ?partnerships?.

While researching the conference theme, I encountered Common Purpose, an organisation that seeks to empower through training and partnerships. Jo Rowbotham, curriculum director, specialised in techniques for building effective teams. We devised ?The Partnership Game?: a role-play exercise for delegates to experience in microcosm the process of making ? or trying to make ? partnerships. It was adapted from a Common Purpose exercise that teams of 12 or so would play over a period of several weeks. We had a 90-minute slot for anything between 150 and 300 people, depending on how many people arrived in Birmingham before 11am.Would it work? We did not have a clue.

As they arrived at the conference each delegate was allocated to one of ten fictional organisations such as ?The Chamber Orchestra? or ?The National Museum?. Two identical games were set up to take place simultaneously in order to keep the group size down to a maximum of 15. Each group had an advisor, someone who actually worked in that kind of organisation. Each group had 10 minutes to develop an ?identify? for their organisation, its objectives, and consumers. The advisors used their own experience to ensure that the emerging identities were reasonably credible. Each group had a further 15 minutes to brainstorm any partnerships that could be made with each of the other 9 organisations, considering issues such as compatibility and synergy. The groups then had 30 minutes to get out there and make deals with three of the other organisations. Absolute chaos ensued. Hundreds of people were moving around the building, negotiating, arguing, conniving and collaborating. The conference felt alive ? people were animated, excited and engaged. ?The National Daily? had organisations queuing up to offer ?unique and exciting partnerships?. ?The Annual Festival? made eight deals in 25 minutes. The game ended with 30 minutes of debriefing and exchanging learning points with members of the twin group in the other game.

The Partnership Game worked because it encouraged lateral thinking and new approaches to collaborations between unlikely partnerships. Delegates started the afternoon programme of speakers with a clear understanding of the key drivers for a successful partnership. At a practical level, it was an effective orientation to the building ? it was easy for people to find seminar rooms after that. The game fostered a high level of empathy among delegates, and created a warm atmosphere of bonhomie that seemed to last for the duration of the conference. For me, however, the most exciting outcome of the Partnership Game was that none of us ? organisers or participants ? knew what we were going to learn before we started. Who could ask for more?